(Clearwisdom.net) Falun Gong practitioner from Mid-Taiwan held an experience sharing conference from September 4 to 6, 2009. The conference was held at the Leader House Hotel in Chang-hua County.

Practitioners studied the teachings and did the exercises together. They shared their recent experience from their practice, including their physical and mental improvements, how they balance their time between work and family, and how they tried the best to clarify the facts of the persecution of Falun Gong to more people.

On September 6, 2009, practitioners from around Mid-Taiwan did the Falun Gong exercise in front of the Leader House Hotel. 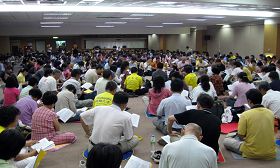 At 4:50 a.m. in the morning, practitioners gathered on the playground in front of the hotel and did the five exercises. As the sun gradually rose, many residents came to the playground to exercise. As they saw practitioners doing Falun Gong exercises, some started to imitate the movements.

Mr. Li came from Yunlin County. He had a bad temper and a fierce demeanor before he practiced Falun Gong. Many people were too scared to visit his store. Now he has improved his character following the teachings of Falun Dafa. He talks peacefully and his face looks friendly.

Ms. Zhang from Taichung City talked about being irritated by whatever her husband did recently. She had a big fight with him. Later she realized the problem came from her deep feelings for her husband. Her expectations for her husband were unreasonably high. When she realized that, she started sending righteous thoughts to clear away her bad thoughts and the situation improved. She had similar conflicts with her children. She worried about the children's performance at school too much and that caused unnecessary quarrels. She has been trying to let go of these attachments, and her family has now become more harmonious.

Ms. Lai had so many illnesses that she tried all kinds of medicines and nothing worked. She once gave up hope and drew up her will. After she practiced Falun Gong, she was as healthy as she used to be in her 20s. Her family and friends witnessed the miracle of Falun Gong. Her relationship with her mother-in-law and husband improved as well. She stopped complaining and things became more pleasant at home.

Ruxin is from Chang-hua. Her illnesses disappeared after she practiced Falun Gong. She has been calling China to tell people what is really happening in the persecution of Falun Gong. Recently she'd found that the guards in forced labor camps started to listen to her talking about Falun Gong. They stopped yelling and scolding her like they used to. A guard even put her on the speaker system so everyone in the camp could hear her. She talked as long as the person let her.

Ms. Li worked as a part time reporter for NTDTV. She has seen many people in the company take on many tasks. They worked very hard and were thoughtful and considerate of others. She said that it was a test for her character every time she went out for an interview and every time she had to edit a piece of news. She believed these were chances for her to improve her character.

Ms. Lin Man-cu works at NTDTV as well. She said that she did not have a routine work schedule as a reporter. She envied other practitioners who could a have set time for doing Dafa work, studying and doing the exercises. However, in order to have news put on NTDTV in a timely fashion, she had to let go of her personal needs.

Ms. Zhan is one of the editors at NTDTV. Once she turned in a video clip that she spent two weeks editing and it was completely re-edited. She felt bitterly disappointed and sad. However, when she realized the re-edited clip was so much better than her version, she re-examined herself and tried to improve her professional skills. She believed every time her clips got reviewed, it was an opportunity for her to improve.

A couple working in a breakfast shop near the Leader House Hotel were happy to see Falun Gong practitioners. The practitioners helped clean the tables and talk to other customers while they were waiting. The owners were impressed with practitioners' friendliness.

“Germany: "I Hope That the Irrational Persecution Will Soon Be Stopped" (Photo) ”