On February 20, 2009, Divine Performing Arts (DPA) International Company staged its first show at the Tainan Municipal Cultural Center. It is the first of 37 DPA shows to be held in six cities in Taiwan. Divine Performing Arts selected Tainan as its first stop in Taiwan for the second year in a row, and the number of shows was increased from four shows last year to six this year. Many in the audience came from other counties and cities to attend the performance. 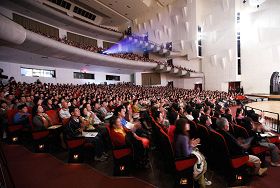 A full house for the first DPA show in Tainan 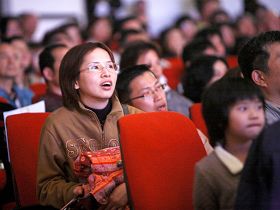 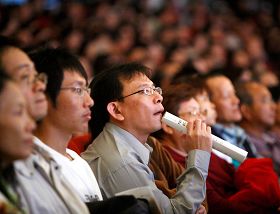 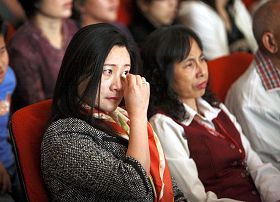 The audience was visibly moved during the performance

Director Chen Chiu-cheng of the Tainan Cultural Center said that DPA made a miracle in ticket sales. "It is a historic moment for the cultural center. All tickets for the six DPA shows are sold out. I think only Divine Performing Arts can achieve that. The DPA show is welcomed by everyone. In ticket sales, it has surpassed all other shows." 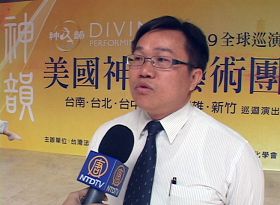 The DPA show was also commended by Tainan education officials. The Tainan City government recently issued its "2009 traditional culture and art education training for teachers in high schools and primary schools," in which attending a Divine Performing Arts performance was listed as a training item. Below are comments from members of the audience after the February 20 performance.

Head of Tainan Hospital: DPA show is worth seeing again and again 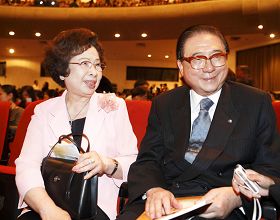 Kuo Kuo-chuan, Head of Kuo General Hospital, and his wife Lin Chin-chin praised the show. "It's very high level. High caliber." Mr. Kuo commented that every performer on stage could have been a lead performer. Ms. Lin said, "This was really beautiful. I was really touched in my inner heart." After the show, they asked service staff if there were any tickets available for the remaining shows in Tainan. They said they wanted to see the show again.

Chief of the American Institute in Taiwan (AIT) Kaohsiung Branch Office: The show is touching and delightful 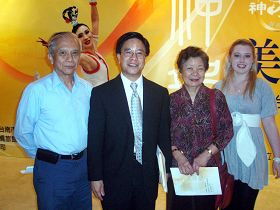 Chris Castro, chief of the American Institute in Taiwan (AIT) Kaohsiung Branch Office and his parents and friends

Mr. Castro, who attended the show with his parents and friends, said that he was delighted and pleasantly surprised to see this "marvelous" show.

He had heard about Divine Performing Arts in the U.S. and knew that the performance is of high caliber, but he had not had a chance to see it there. Since his parents happened to visit Taiwan on the eve of his first anniversary as Chief of the AIT Kaohsiung Branch Office, he invited his parents and friends from Kaohsiung to the show to make the evening memorable.

Mr. Castro said that he enjoyed all the performances that evening.

He especially enjoyed the pieces, Mulan Joins the Battle, Monk Ji Gong Abducts the Bride, and The Monkey King Triumphs, as they were very educational and helped him learn more about the themes of allegiance and filial piety in Chinese culture. 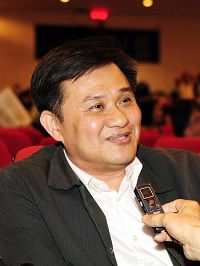 Song Chen-chao, Professor of Political Economy and Director of the Economic Research Institute at National Cheng Kung University, watched DPA show for the second time. He said, "The show is awesome, from the backdrops, animation, dancing, even to the colors. The dances of the various ethnic groups demonstrate the profoundness of Chinese culture. It is moving and soul stirring. It is a very high caliber show."

CEO of International Youth Chamber of Commerce: I admire the performance of these young performers

Lih Kunsong, CEO of the International Youth Chamber of Commerce, said that Divine Performing Arts had drawn the admiration of everyone. He plans to introduce the show to the Youth Chambers of Commerce around the world, giving members everywhere a chance to see the performance in different parts of the globe.

Mr. Lih said, "The program about the persecution of Falun Gong practitioners in China is important as more people should know about it. I admire these young performers. They are performing in such a high caliber show."

President of Dadan Clothing Company: The connotations of the lyrics are profound and touching

President Chu of Dadan Clothing Company is a Christian. He felt that the songs in the show were unique and very moving. He remarked that the lyrics have deep connotations, and added that all the performances were touching.

The DPA show is splendid

Ms. Wang, the wife of the director of Fulong Science and Technology, said, "What I like most was that each dancer had a smile on their face and displayed such intricate skills. The dancing in Poet Li Bai and The Monkey King Triumphs was especially good. The fan dancing was gorgeous. The gestures, hand movements, eye contact, and the facial expressions were coordinated so well. The backdrops were beautiful. The costumes and colors are all beautiful." 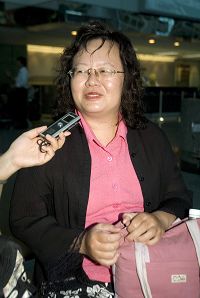 Renowned vocalist Ms. Cheng Fanfan was impressed with the show, "Today's show was wonderful and colorful, especially the dance-drama, Mulan Joins the Battle. I was very moved by this dance," Ms. Cheng said.

Ms. Cheng was one of the finalists in the second annual Chinese International Vocal Competition held in New York City in July 2008, organized by the New Tang Dynasty Television.

A musician who studied vocal technique in Vienna for 16 years, Ms. Cheng was enthralled by the show. She said, "The show presented the historic stories extremely well. Nowadays, it is rare to find shows covering historic stories on TV. The shows they show on TV these days are full of violence, killing, and hatred.

"I felt that the [DPA] show was transmitting a message about the true meaning of life. Nowadays, people are very busy pursuing their own interests and personal gain. Few are able to pay attention to other things or really think over other certain issues. What the DPA conveyed is the spirit of 'Truthfulness, Compassion, and Forbearance.'"