After the cultural night held on August 22, 2008 at Esplanade Park, the Helsinki Cultural Festival continued to create a strong cultural atmosphere in the park. On August 30, prior to the end of the Cultural Festival, Helsinki Falun Gong practitioners once again demonstrated the beauty of Falun Gong and exposed the truth of the Chinese Communist Party's (CCP) nine years of persecution. 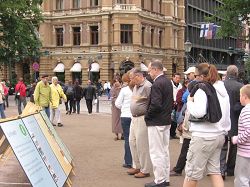 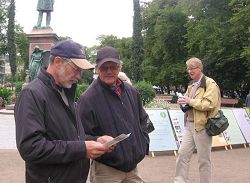 Tourists from other countries carefully read materials about Falun Gong 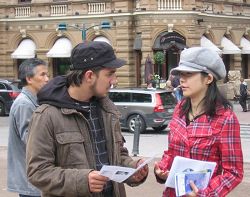 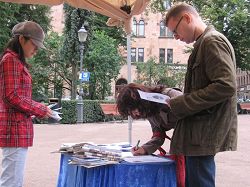 It was the end of summer, but there were still many tourists in Finland. People from around the world packed into the little Esplanade Park to get a taste of Finnish culture. There were Swedish families, older couples from the US and tourists from Europe. Attracted by the Falun Gong practitioners in the corner of the park, many stopped to listen to an introduction of the practice and about the CCP's persecution of Falun Gong. Information was presented in English and Finnish. Many people read the exhibits, asked for materials, and signed a petition to support Falun Gong.

A woman from a small town in Sweden asked practitioners for materials and signed the petition to support stopping the persecution. She said, "I heard about Falun Gong on our local radio," and added that she hoped to be able to learn more. Another gentleman asked whether practitioners had any more leaflets in Swedish and was happy to receive The Epoch Times newspaper and the Nine Commentaries on the Communist Party in Swedish.

Akeu is a tourist from Turkey. Having accepted English materials from practitioners and seeing that it was about human rights, he hurried over to sign the petition in support of Falun Gong. As he signed his name, he asked, "What aspect of human rights is this about?" A practitioner explained, "It is about Falun Gong practitioners in China. They are suffering atrocious torture and persecution for not giving up their beliefs." Akeu asked, "What is Falun Gong?" "Falun Gong is a traditional Chinese cultivation practice." At this, Akeu could not wait but commented, "That's why the CCP dislikes (Falun Gong)." The practitioner nodded, "Yes, Falun Gong is so good that many people are practicing, hence the CCP dislikes it."

A woman read an English leaflet and walked up to the table to sign the petition. She said, "I have heard of Falun Gong before." Before she left, she said to practitioners, "Good luck!"

There were also a lot of Finnish people in the park. Many went straight up to the stand to sign. One Finnish couple took the initiative to sign the petition, and the man said, "What you are doing is great. I really appreciate what you are doing."

When the practitioners were demonstrating the exercises, a gentleman watched attentively. When he saw the third exercise, he could not help but follow along with the movements. When he started, three girls and another gentleman also joined in to learn the exercises.

Practitioners also distributed hand-made folded paper lotus flowers to children and the elderly, which added beauty and harmony to this cultural festival.