France: Deputy of National Assembly Brings to the Attention of the Secretary of Sate the Way of Life for Falun Gong Practitioners (Photos)

On June 2, 2008, Mr. Laurent Henart, Deputy of National Assembly wrote the following written question to bring to the attention of the Secretary of State the way of life for Falun Gong practitioners. 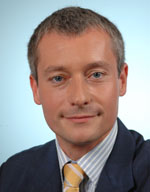 Addressed to the Honorable Secretary of State for Foreign Affairs and Human Rights.

Mr. Laurent Henart would like to bring to the attention of the Honorable Secretary of State, the way of life for Falun Gong practitioners. As a natural health method, Falun Gong combines physical exercises and meditation based on the principles of Truthfulness, Compassion and Forbearance. It is a specificity of the Chinese culture and civilization. Whereas, the practitioners of Falun Gong only wish to be able to exercise their right to freedom of opinion and expression, and their right to freedom of assembly and association, they consider it regrettable that the Chinese authorities put in place a quasi systematic policy of repression towards them since 1999. Consequently, he would like to know the initiatives and steps the Government could undertake to support the practice of individual and collective freedoms of these followers. 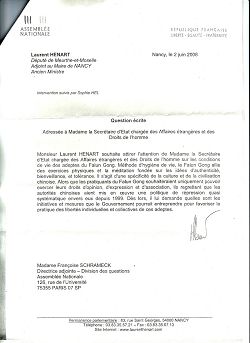 “Don't Use the Persecution as the Criterion to Evaluate Fellow Practitioners”