After the horrifying discovery of organ harvesting from living Falun Gong practitioners and the immediate cremation of their bodies to destroy the evidence by the Chinese Communist Party (CCP) was exposed on March 4, 2006, the Falun Dafa Association and the Minghui/Clearwisdom website founded the "Coalition to Investigate the Persecution of Falun Gong in China" (CIPFG, also called "Coalition to Investigate the Persecution") one month later. The CIPFG is collecting information from people who have come forward and is calling on people who know the truth to further expose crimes concerning illegal organ harvesting in China. Below is information that has come to light recently.

A Falun Dafa practitioner's non-practitioner sister recently had a tumor removed at Shenyang Military General Hospital in Shenyang City, Liaoning Province. When visiting her sister, the practitioner discovered that the hospital is able to quickly find a matching organ for patients. As soon as the patient arrives at the hospital, organ type matching, preparation, and transplant surgery are all done within a few days. Therefore, the hospital has many patients in and out of the hospital. Doctors performed 19 organ transplants in only a few days.

Zhongshan Hospital in Shanghai is affiliated with Fudan University. It is the most well known hospital in Shanghai. According to reliable insider information, the hospital performs at least one heart transplant a day. It's also been performing an unprecedented number of kidney transplants.

The patient only has to wait ten days for a matching heart and transplant. The hospital boasts an ample organ supply and "well-experienced" and "highly-skilled" doctors. Many patients think that the hospital can transplant any organ.

The primary surgeon for heart and kidney transplants is Wang Chunsheng, who became rich by performing many heart transplant operations. His family members and children live in the US and he visits them at least five or six times a year. A heart transplant costs 300,000 yuan. The nurses in the Cardiology Department make 5,000 to 6,000 yuan a month, way above the average nurse's income in China. 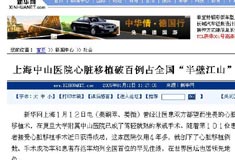 Xinhuanet website reported "Zhongshan Hospital in Shanghai Has Performed More than One Hundred Heart Transplants, Accounting for Half of the Heart Transplant Operations in China."

The Gaoxin Hospital in Xi'an City, Shaanxi Province, restricts access to its organ transplant web pages to hospital employees only. According to an insider who asked to remain anonymous, the hospital is low key when it comes to organ transplants, but it has continued to do them on a large scale. It is being kept hidden from outsiders. When fetching the organ, the hospital covers the name on the ambulance. Many people think the hospital gets the organs from executed criminals, but executing a few criminals cannot support the large-scale transplant activities at this hospital.

The Chairman of the Board of Directors of Gaoxin Hospital is Liu Jianshen, who is also a shareholder of Kaiyuan Mall and Da Tang Furong Garden in Xi'an City. He became rich from selling oil illegally. He is the primary evildoer behind the "Mafia incident at Gaoxin Hospital."

The President of the hospital is Liu Jianjun, who is responsible for the hospital's operations.

A practitioner's relative, in his 30s, came down with uremia recently. He needed dialysis twice a week and spent almost all his family's savings.

One day, this relative went to visit the practitioner and said he was going to have a type match test at the Number One Hospital of Jilin University in Changchun City, Jilin Province, for a kidney transplant. The practitioner told him that the CCP harvested organs from living practitioners for organ transplanting and advised him not to do it. However, deeply concerned about losing his life, his relative insisted on having the test.

The next day, the practitioner accompanied his relative to the hospital. The organ transplant department had recently been relocated to the basement of the In-Patient Department. Security guards patrolled the area around the clock. There were five or six people for organ type matching tests that day, three from other cities. The nurse said that the kidney supply was tight these days but their hospital could still get some. She boasted that the hospital had ample transplant experience and "excellent" doctors. She said the kidneys were from healthy persons between the ages of 18 and 45. Asked about the donor's information, the nurse appeared nervous and hemmed and hawed. The nurse said that the average cost for a kidney transplant is around 70,000 yuan and the waiting time is around half a year.

Later the practitioner found out that the hospital obtained organs from the primary transplant surgeon's wife, who is the Chief Procurator of a Procuratorate in Changchun City. The surgeon performs over 200 kidney transplants each year. If the patient bribes him with thousands of yuan, the transplant can be done within one to four months.

The Shijiazhuang City Number One Hospital (also known as the People's Hospital) in Hebei Province plans to build a new hospital building in Guozhuang Town, Wuji County, Shijiazhuang City. The project is supervised by the Deputy President of the hospital, Zheng Zhimin who has reportedly performed five kidney transplants in 10 hours. (http://www.clearwisdom.net/emh/articles/2006/8/15/76850.html) The hospital has secured a large organ supply source.

The new branch is located in a big courtyard in Guozhuang Town, which was a health clinic. There is a three-story building and a two-story building inside the compound. The town is lacking the basic infrastructure for a hospital. Therefore, the decision to set up the organ transplant center there is very mysterious. We suspect there is a secret camp that holds Falun Gong practitioners in that area. CIPFG is calling on practitioners or people in Wuji County who know details to come forward with the truth.