There were two performances of the Holiday Wonders show on December 22, 2007. Many people came for the first time, whereas some who had attended the show several days ago came back and brought their friends. Audience members from the educational, art and business communities had high praise for the show, with many saying that they sensed the honesty, brightness and positive energy in the performances--qualities that are needed throughout the world. 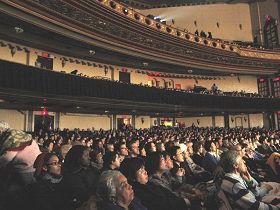 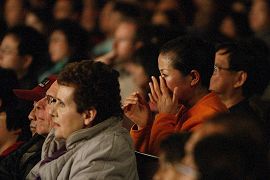 Audience is moved by the performance. 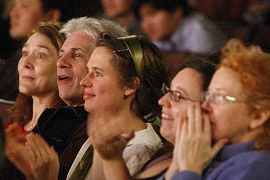 People are completely caught up in the performance. 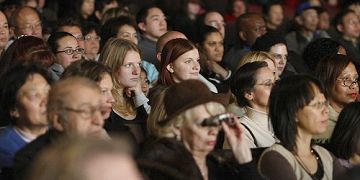 A view of the audience. 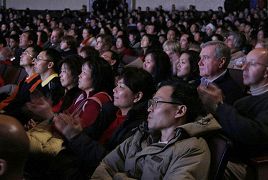 A view of the packed theater. 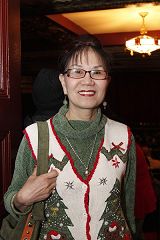 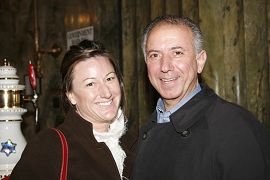 Mr. Edward Juarez-Pagliocco, the founder of the International Immigrants Foundation, and his wife. 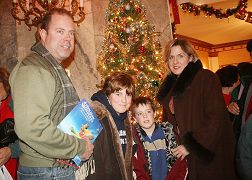 James McCarthy, New York Police Department Midtown Precinct South Chief, and his family attended the show. He expressed his admiration for the show and for traditional Chinese culture. 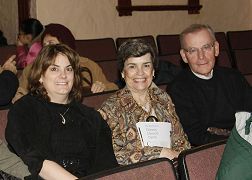 Fred Grizmala, an electrical engineer in Manhattan, and his family attended the show. He said it was well done and superb. 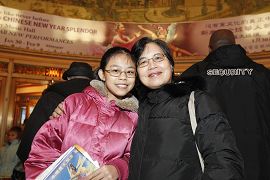 Zhuo Biyun of New York is proud of being Chinese, especially when she sees so many people appreciating Chinese culture.

Violinist Soovin Kim said that he has an affinity for Chinese history, having studied it at Yale University. He said that the show vividly brings historical stories to life. (Soovin Kim won the first place in the 1996 Paganini Competition, the only American to win this prize in the last 24 years.)

Professor Gao Weiliang, a music professor from New York, said that the show is one of the best in the world. She said that the artists were sincere and conveyed compassionate and positive messages to the audience; their performance makes people think of the purpose of life.

Dr. Gao said that the dances in the show were peaceful and vividly told historical stories. She said the artists perfectly demonstrated the moral standard and spirit of traditional Chinese culture. She said, "Modern life is stressful and people have many troubles. The show gives people spiritual hope. It helps people to think about life and the purpose of life. It brings hope and brightness to people, so it is beneficial to the whole society."

Professor Gao pointed out that one can create real art only when one's moral standard is elevated. She emphasized that Holiday Wonders is a great starting point, offering people a completely new perspective about art.

Honesty, compassion and positive energy in the performances

Mr. Edward Juarez-Pagliocco, founder of the International Immigrants Foundation, had high praise for the Saturday performance. He said that the show is a real journey through Chinese culture, and it made him appreciate Chinese culture all the more. He indicated that people could feel the honesty, compassion and positive energy manifested in the performances. Mr. Juarez-Pagliocco said that great art comes from Heaven, because humans cannot reach that level of perfection on their own.

Mr. Juarez-Pagliocco has a Chinese name, which means "love moral Chinese," pronounced as "Ai De Hua." He said that his name reveals his feelings about the show. Holiday Wonders manifests righteousness, which the world needs

Ahmed Maharemkan, a reporter, and Maria Antonette Kazan, a talk show host on New York's Channel 67, watched the show together. They said that they both thought the show was one of the best in the world and would be very popular on Broadway.

Mr. Maharemkan has been to many cities around the world, and has seen many productions. He said that the Holiday Wonders show is unique; it showed him what the real Chinese culture is about and gave him a new perspective on life.

Ms. Antonette Kazan said that the show expressed messages of love and a positive and righteous spirit, which everybody needs. She said that they would tell their friends about how wonderful the show is.