On December 10, 2007, at the 59th anniversary of the "Universal Declaration of Human Rights" by the General Assembly of the United Nations, Amnesty International issued a statement to appeal for the rescue of Falun Gong practitioner Bu Dongwei. http://www.amnestyusa.org/Global_Writeathon/Bu_Dongwei/page.do?id=1011520&n1=3&n2=34&n3=65 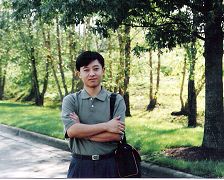 Beijing Falun Gong practitioner Bu Dongwei was a staff member of the Beijing office of the Asia Foundation. He was sentenced to two-and-a-half years' of forced labor camp for practicing Falun Gong. It is his second imprisonment. In 2000 he was sentenced to one year of forced labor camp for calling on the Chinese regime to review the persecution of Falun Gong. Amnesty International's news mentioned, "in the lead-up to the 2008 Olympic Games, Beijing police have used abusive detention practices such as 're-education through labor' to 'clean up' the city."

Bu Dongwei's wife Lou Hongwei said, "He is a kind-hearted and sincere young man. In China today, such people are sentenced for their belief in 'Truth-Compassion-Forbearance.' Otherwise, people like Bu Dongwei would have no connection with labor camps and prisons."

Ms. Lou appreciated Amnesty International's second call to rescue Bu Dongwei. She mentioned that she tried to solve the issue through legal means when Mr. Bu was arrested initially. She thought that in the capital of Beijing, where the Olympic games will be held, the rule of law should be respected. But in each attempt to contact Beijing, she was disappointed. So she decided to seek help from the international community. Amnesty International was one of international organizations from which she sought assistance.

In addition, the UN also listed Mr. Bu in urgent rescue cases. The European Parliament passed a resolution "Europe and China," which also included a request to the Chinese government to release Mr. Bu. The German Foreign Ministry, some congressional representatives in the United States, and non-governmental organizations expressed their support and assistance.

The sample letter of Amnesty International is as follows:

I write to you regarding Bu Dongwei, who is currently serving two and a half years of "Re-education Through Labor" (RTL) at the Tuanhe RTL facility in Beijing. Amnesty International considers Bu Dongwei to be a prisoner of conscience who has been detained for the peaceful exercise of his beliefs as a Falun Gong practitioner.  Mr. Bu has reportedly been deprived of sleep, beaten and forced to sit in a small chair all day during RTL in an effort to make him renounce his beliefs.

The use of Re-education Through Labor and the detention of individuals without trial counter commitments made by Chinese officials that human rights would improve in the run-up to the 2008 Olympic Games in Beijing. These abuses also breach the primary principles of the Olympic Charter relating to the preservation of human dignity and respect for universal, fundamental, ethical principles.  The exercise of one's rights to freedom of expression, association and religious belief should be protected, not punished.

I urge you to see to it that Bu Dongwei is not subjected to torture or ill-treatment and that he is granted access to his family, lawyers and medical treatment. I call upon you to live up to China's obligations to protect human rights by abolishing Re-education Through Labor and ensuring that decisions about detainees are no longer exclusively in the hands of the police.  Please bring about the immediate and unconditional release of Bu Dongwei and all other prisoners of conscience in China.