(Clearwisdom.net) The appalling revelation of the Chinese Communist Party's (CCP) atrocities committed at Sujiatun Concentration Camp in Shenyang City enraged and aroused condemnation from more and more people even though the Hong Kong media blockaded the information. Some democracy proponents protested the inhuman atrocities at Sujiatun in front of the Chinese Liaison Office on March 19, 2006. During the past two days Hong Kong Falun Gong practitioners held an anti-torture exhibit focusing on the Sujiatun Tragedy at the designated pedestrian area at Tong Luo Wan and Wang Jiao. Many passersby were shocked at the situation. Many people took special editions of the Sujiatun Incident and the Nine Commentaries on the Communist Party, according to the coordinator of the activity. 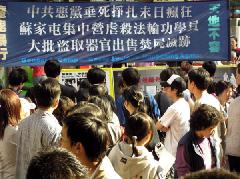 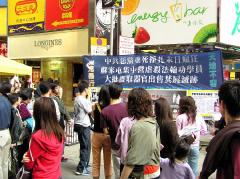 A group of democracy proponents protested in front of the Chinese Liaison Office at noon on March 19, condemning the situation of the Sujiatun Concentration Camp. They shouted, "Protest the CCP's atrocities," "Protest harvesting Falun Gong practitioners' organs while they are still alive," and "Shame on the CCP regime," and other slogans. Yang Zeming read a statement saying that Falun Gong believers are faithful to their beliefs. What crimes have they committed that justify the authorities being so barbaric towards them? The statement pointed out that regarding the Sujiatun incident, the Hong Kong media once again colluded with the CCP to blockade the information and citizens' rights to know. The self-censoring is evident.

In the afternoon of March 18-19, at the designated pedestrian area in Tong Luo Wan and Wang Jiao, Falun Gong practitioners displayed banners and posters exposing the insidious atrocities committed at the CCP's Sujiatun Concentration Camp. They also distributed a special edition to help people better understand the situation. There was also an anti-torture exhibit on the streets of Wang Jiao. Early on Saturday morning the anti-torture exhibit displayed at Tong Luo Wan prompted many more concerns from people, so practitioners decided to extend it for one more day on Sunday.

One woman read the materials, and then walked up and inquired of a practitioner in tears how she could help, and if donations are accepted. The practitioner told her that spreading the news to more people would be of great help. Finally the woman took some materials and agreed to help distribute them.

Many passersby were shocked. Some citizens expressed that we must seize the time, otherwise the practitioners at the Sujiatun Concentration Camp would be at serious risk. A foreigner heard of the news and cried. Some young people from China requested more Nine Commentaries to take to their friends.

Falun Gong practitioners expressed that many passersby had positive responses towards today's anti-torture exhibit, and after reading the materials, many people took the Nine Commentaries on their own initiative. The practitioners hope that the world's people can pay attention to the Sujiatun Incident and safety of Falun Gong practitioners inside China, conduct an independent investigation as soon as possible, and stop the CCP's outrageous atrocities.