On May 8, 2005, practitioners in Brooklyn, New York celebrated the sixth annual World Falun Dafa Day at one of their practice sites. 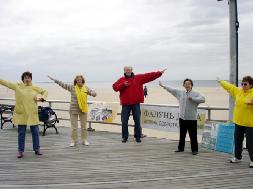 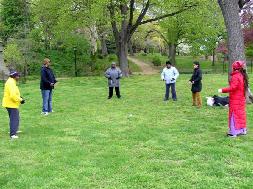 The practice site near the Chinese community, located on 8th Avenue in Brooklyn, was established in the spring of 1997. The practitioners at this site are primarily Chinese. Since the site was established, practitioners have held group practice everyday for the past nine years. Most Chinese people in the community are now familiar with the exercises of Falun Dafa. Among practitioners of this site, there are people in their 70s, young children, older people with limited education, computer experts, PhDs, doctors, government officials, etc. 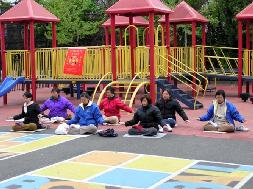 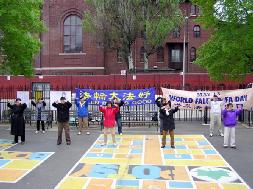 Practitioners often get together to study the book Zhuan Falun and practice the exercises. Every practitioner has experienced the wonder and greatness of Falun Dafa.

Ping is in her early 50s. She came to the United States years ago to earn money, leaving behind her young children and husband. Before she came to the U.S., she had hepatitis B for more than 20 years. After moving to New York, she often worried that she could not bear the hardship any longer, as her work was very demanding. In early 1997, she began to practice Falun Gong, and she completely regained her health without evening thinking about it. Now she often helps her husband to sell fruit on the street for more than 10 hours per day. Despite the weather and hard work, she has never had any health problems since 1997. She said, "If I was not a practitioner, I wouldn't even think about doing all this hard work." One day, another vendor near to their booth asked her, "Other street vendors are all getting darker faces, why is your skin still so good?" She smiled and said, "Because I practice Falun Gong." The vendor said, "Yes, that practice is indeed good." Having seen her benefit from practicing Falun Dafa, her three sisters all started to practice, one after the other.

Ms. Xiao, who is in her late 40s, developed a severe migraine headache when she was in college. She had to take a nap every day during lunchtime, otherwise her head would ache badly. Whenever she suffered from this condition, she could neither speak loudly and nor walk briskly. She also had some other problems, and her nose bled periodically. Since she started to practice Falun Dafa in 1998, however, all these problems quickly disappeared. She now feels very energetic every day and no longer needs the lunchtime nap.

Mrs. Zhao, who is almost 60, developed severe diabetes and hypertension in 1995. Though she spent a lot money on medication, her health condition degenerated, and she eventually resigned from her workplace. In 1998, she started the Falun Gong practice, and all of her problems disappeared within just three months. Since the start of the brutal persecution of Falun Gong in China, she started appealing in front of the Chinese Consulate every day regardless of the weather. The snow, rain, and baking heat have never stopped her from coming out.

Eva has a M.S. in computer engineering. Because of prolonged exposure to the computer monitor, her eyes hurt badly, and she was worried about her eyesight. In 1999, she started to practice Falun Gong, and her eye problem went away.

In Brooklyn, there are two other practice sites that consist of mostly western practitioners, and they were both established in the summer of 1999. One site has many African-American practitioners, while the other has a lot Russian-speaking practitioners. They come from all circles of society, with different religious backgrounds. After each person read Zhuan Falun, however, they soon realized that Falun Dafa was the practice they had been looking for. These two practice sites bridged Falun Gong to the Brooklyn mainstream. These western practitioners also practice year-round at parks, teach new practitioners the exercises, and share their experiences with the media and government officials.

During this period in history, it is really one's greatest honor to listen to Master's teaching in person, and to assist Master in Fa rectification. We sincerely wish our benevolent and great Master a happy birthday and congratulate Master on the sixth anniversary of World Falun Dafa Day and the thirteenth anniversary of the introduction of Dafa to the public.