On the afternoon of May 8, Falun Dafa practitioners in Ansan-si City held a "Journey of Falun Dafa" photo display and a concert in a local park to celebrate the 13th anniversary of the introduction of Dafa to the public and World Falun Dafa Day. Together with non-practitioners, after the concert, practitioners held a candlelight vigil to commemorate the Chinese practitioners who have been persecuted to death in China.

Ansan-si city has one of the largest Chinese communities in Korea, with nearly 20,000 Chinese residents. During weekends and holidays, Chinese who live in nearby areas also come to the city for sightseeing and shopping in Chinatown. Through the practitioners' persistent efforts, many Chinese and Koreans have learned the truth about Falun Dafa. To reach more people with pre-destined relationships, practitioners prepared this large-scale celebration.

On May 8, practitioners started to set up and decorate the stage at 1 p.m. Though it was quite chilly, the colorful banners and balloons gave the whole park a cheery atmosphere. Besides hanging up many "Falun Dafa", "Truthfulness-Compassion-Forbearance" and "Celebrate the World Falun Dafa Day" banners and flags in the park, practitioners set up a photo display to the right side of the stage. The display had more than 30 historic photos, which vividly documented the spread of Falun Dafa around the world and the brutality of the ongoing persecution in China. 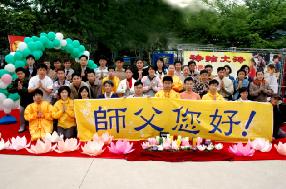 Before the concert even started, a lot of local residents came to the park, and many of them viewed the photo display attentively and asked for Dafa materials.

At 5:30, the concert started with "Falun Dafa Hao" and "Be Saved." The songs composed by practitioners touched everyone present at the site, and some clapped their hands along with the singing.

Practitioners then demonstrated the five sets of exercises, which even more passersby stopped to watch. The peaceful and elegant exercises touched everyone, and some even started to do the exercise following the motions on stage. Many Chinese from Mainland China witnessed the beauty of Falun Dafa, which contradicted the lies that they were fed in China.

After the concert, many people didn't want to leave, and they watched or participated in the practitioners' activities. One Korean said that it was really hard to believe that such a good practice is being persecuted in China. He hoped that the Korean government can offer more help to Falun Gong and urge the Chinese government to end the persecution as soon as possible. 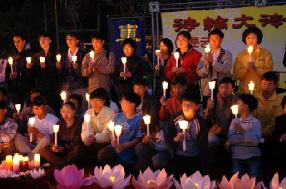 After the 2-hour concert and exercise demonstration, it was dark. However, there were still some people who stayed at the site with the practitioners to start a candlelight vigil to commemorate the Chinese practitioners that were persecuted to death in China. In the end, the practitioners sang "Coming For You" before adjourning the event.