(Clearwisdom.net) The Toronto Santa Claus Parade, known as the world's longest running children's parade, was held November 20 in downtown Toronto. More than 20 floats and at least 20 musical bands participated in the parade. The first procession set off at 12:30 pm from the Korea town located at the intersection of Bloor St. and Christie St. The last the float with Santa Claus did not start moving until one hour and 30 minutes later. 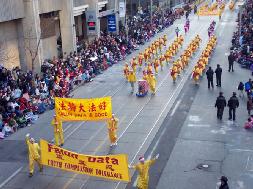 Both sides of the 5.7-kilometer (3.6 mile) long route were crowded with spectators. Even the sidewalk was jammed in many places. Shortly after the parade set off, people saw Falun Dafa practitioners' procession, the eye-catching banner that read, "Falun Dafa is good", and a drum troupe in golden suits playing traditional drum music. Many people watched them with a pleasant surprise. Some moved with the drum music. 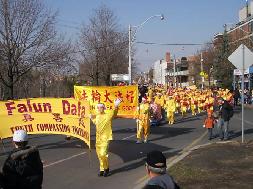 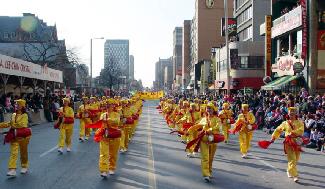 "Falun Gong practitioners have taken part in many community activities in Toronto, but this is the first time that they attended the Santa Claus Parade", said one of the coordinators, Mr. Huang. "This parade policy is really strict and it's not easy to get approval. Because we have good records in our previous various kinds of parades, we have the opportunity to join this parade."

In this, Canada's biggest Christmas Parade, Falun Gong practitioners displayed the beauty of Falun Dafa and the traditional Chinese culture to more than 500,000 on-site spectators and millions of people who watched the parade on TV.