(Clearwisdom.net) The Falun Dafa Association published an announcement on October 9, 2005, warning all those who assist the Chinese Communist regime to persecute Falun Gong, including officials in Chinese Embassies and Consulates, to stop doing evil. At 10:30 am on November 16, 2005, Falun Gong practitioners read the Falun Dafa Association Announcement in Chinese and English in front of the Chinese Embassy at the Hague in Holland. 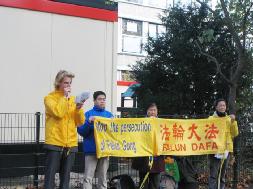 The announcement states, "The persecution of persons based solely on their practice of the principles of "Truthfulness, Benevolence, and Forbearance" is unconscionable. At the beginning of this persecution, many high-ranking officials in the government and the CCP disagreed with Jiang's policy of persecution, or dealt with the persecution passively. Some even resisted. Many high-ranking officials also practiced Falun Gong. During the past six years, through peaceful resistance and a courageous degree of endurance, Falun Gong practitioners have clarified the truth to the people the world over. People who were previously deceived have awakened or are in the process of learning the facts. As a result, they have refused to join the persecution."

"At this critical historical moment, the Falun Dafa Association has made a special announcement: From today on, overseas Falun Gong practitioners will file civil or criminal lawsuits against all important government or CCP officials who participate in or continue to implement the persecution of Falun Gong and as a result, commit new crimes in addition to those they have already perpetrated against Falun Gong..."

The announcement also pointed out, "The CCP regime is against heaven's will, and is about to collapse. It is now having difficulty sustaining the persecution. Heaven's final judgment of these evil criminals is imminent. However, one of the purposes of the sacred FA of Falun Gong is to save people, including people in all social statuses. Even for those who have committed wrongdoings, there is still an opportunity for them to abandon the evil path and choose to be good. For all those who have committed crimes against Falun Gong but want now to correct their mistakes, they can submit, under safe circumstances, a guarantee statement or regret letter to Minghui (Clearwisdom Net) or to any regional Falun Dafa Association to be archived. We will not investigate the various crimes of those who are determined to correct their mistakes. However we will continue to monitor their actions."

During the process, people passing by and many who came into or out of the Embassy heard the announcement and accepted truth-clarification materials.