(Clearwisdom.net) On July 16, 1500 Falun Gong practitioners held a candle light vigil in front of the Washington Monument in memory of those tortured to death during 10 years of persecution. The Chinese characters for "Rectify the Fa" and the English words "Falun Dafa" were spelled out by the many hundreds of practitioners holding their candles, as shown below. 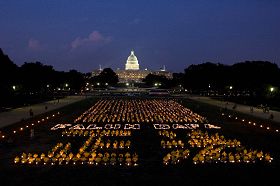 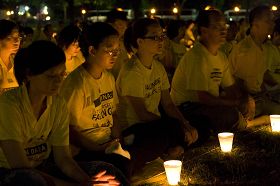 Dr. Huang Zuwei, the organizer of the event, said that practitioners hold activities here every year at this time to expose the brutal persecution. More than 3000 deaths due to persecution have been confirmed in the last 10 years. Dr. Huang said: "When more people know the truth, the Chinese Communist Party's (CCP) evil nature will be recognized, and the persecution will be stopped."

Eighty-eight-year old Ms. Ma is from Chicago. "When I was 60, people said I looked like 80. After practicing Falun Dafa, people say I look like 60 now," Ms. Ma said: "The world would be more beautiful if everybody practiced 'Truthfulness-Compassion-Forbearance'. So, I came here to support these activities calling for an end to the persecution."

Eighty-six-year old Mr. Zhou was a law professor in China. He has spent a lot of money on qigong, trying to heal his diseases, but none of them worked. "I was in very bad health when I was 50. I could not even walk by myself," Mr. Zhou said: "Falun Dafa renewed my life. But so many practitioners are being persecuted in China. So, of course, I want to come for the activities here."

Jerome from Canada started practicing Falun Gong two years ago. When he was little, he wanted to go to the mountain and cultivate like a Chinese monk. "After practicing Falun Gong, I quit drinking. I cut my long hair. Now, I have a two-month-old baby with my wife," Jerome said: "I thank Falun Gong, which made me not so extreme. It balances my life and cultivation. I hope to tell Chinese people that I truly appreciate the rich Chinese culture, and I hope they can recognize the evil nature of the CCP." 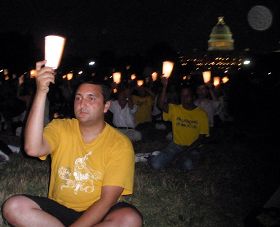 Ms. Wang from Germany said one of her friends was a good student at Qinghua University, but he was sentenced to eight years because of his belief in Falun Gong. "I want to help to end the persecution," Ms. Wang said.

Professor Sun Yanjun, a well-known religion and psychology scholar who publicly quit the CCP recently, came to support the activity. He believes that the reason that Falun Gong practitioners can keep their courage in the brutal persecution is because they believe in "Truthfulness-Compassion-Forbearance" Some people devote their lives to their belief, because there is something more valuable than life.
¡¡

Jonnane and her friends are tourists from Australia. She teaches yoga, so she was interested in Falun Gong meditation. The candle light vigil gave her a very peaceful feeling. They took a lot of photos. They were shocked when they learned about the persecution, and expressed their support for efforts to end it.

Lesca was attracted to the music. He watched the peaceful vigil for a long time. He praised practitioners' belief and condemned the persecution. He expressed that he wants to learn more about Falun Gong.

Cindy asked practitioners what was going on. When she learned about the truth, she said the evil nature of communism brings disaster to the world. She hopes that the free society and the U.S. Government will take more action to help, and to stop the communist party bringing further damage to the world. Cindy thanked practitioners and expressed her support before she left.

On July 20, 1999, the Chinese Communist Party (CCP) launched a brutal persecution of Falun Gong. The persecution is not only towards Falun Gong, but also aims to destroy the moral standards and human principles of all people. Since the start of the persecution, Falun Gong practitioners throughout the world have been constantly speaking out about the truth of Falun Gong and exposing the CCP's crimes in a tireless effort to end the persecution.

“Washington, DC: People From All Walks of Life Call for an End to the Persecution (Photos)”