Washington, DC: People From All Walks of Life Call for an End to the Persecution (Photos)

(Clearwisdom.net) On July 16, 2009, more than 1000 Falun Gong practitioners and supporters held a rally opposing China's persecution of Falun Gong in front of Capitol Hill in Washington, DC. Many non-government organization (NGO) representatives gave speeches at the rally, calling on people to help stop the persecution. 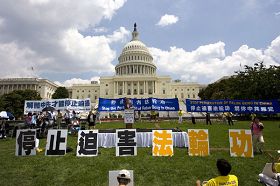 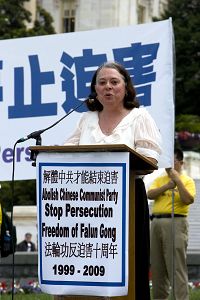 Patricia Burkhardt from Church Women United pointed out, "Torture of Falun Gong adherents has been documented in each of China's provinces, in jails, labor camps, brainwashing centers, and schools in China's big cities, small towns, and villages. To date, over 3,000 deaths have been documented, as well as over 63,000 accounts of torture. An estimate of the real figure puts the actual death toll in the tens of thousands."

She said, "The Falun Gong practitioners have responded to all of this with markedly peaceful means. Throughout the decade of persecution, they have refused to adopt violence. Instead, adherents first tried to reason with Communist Party rulers through letters and petitions. When these fell on deaf ears, the Falun Gong turned to Tiananmen Square, where--through quietly meditating or displaying banners before being arrested--they sought to call upon the conscience of the Chinese people as well as world leaders. As the persecution continued, the Falun Gong began countering state propaganda by distributing information exposing the persecution.

"Collectively, the movement constitutes one of the largest non-violent movements in the world.

"At the same time Church Women United praises their courage to face the persecution with compassion and tolerance.

"Church Women United stands with you together in solidarity until the persecution is ended."

In a statement read by Jim Geheran, Dr. Yang Jianli, president of the Initiatives of China, said that Falun Gong practitioners are not trying to bring down the Chinese government, that they are peaceful people, obeying the principle of Truthfulness-Compassion-Forbearance. 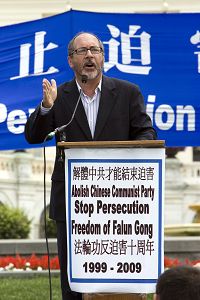 Patrick Mahoney from Christian Defense Coalition went to Tiananmen Square on August 7, 2008, the day before the 2008 Beijing Olympic Games, to appeal for Falun Gong. In his speech, he said that, although the Chinese government deported him, it was his honor. He strongly condemned the persecution.

He expressed his respect to Falun Gong practitioners. He said their behavior is very good and touching.

He pointed out that, to end the persecution and give Chinese people freedom, human rights, and dignity, we must dissolve the Chinese Communist Party (CCP). To reach this goal, Chinese people need to step forward, and different groups need to make their voices heard. He said that we need to speak up in the international arena, that we cannot remain silent, that the President needs to state his position on this issue, and that we need to expose the CCP's human rights violations and exert pressure on it.

Mr. Mohoney said we should not trade human rights with the CCP for business. He called upon President Obama to formally condemn the persecution of Falun Gong on July 20, the 10th anniversary of the persecution.

Mr. Mohoney said we need to tell the American people about the persecution and organ harvesting, because they will be shocked and join the peaceful resistance against the persecution. 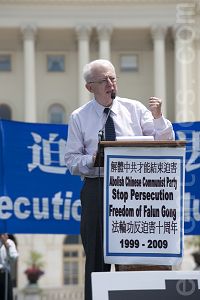 Michael Horowitz, a senior fellow of the Hudson Institute

Michael Horowitz, a senior fellow of the Hudson Institute, said in his speech that history is not written by the famous. Instead, it is written by those who devote their lives to truth. He said Falun Gong practitioners make this world more beautiful.

Mr. Horowitz agrees that, to end the persecution, we must dissolve the CCP. He said tyrannical powers like the CCP do not have the mechanisms to change themselves. Also, that tyrannical powers cannot exist for a long time. He noted that the former Soviet Union came crashing down, as did those in Eastern Europe, so the CCP will collapse, too--its disappearance is a historical necessity. 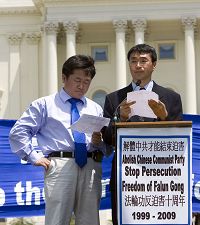 Sun Yanjun, a visiting scholar, said that Falun Gong practitioners' ten-year peaceful resistance against the persecution has touched a lot of people. He said, "As a religious-studies scholar, I have seen a lot of religious groups. I have to say that Falun Gong practitioners are the most sincere, kind and wise group that I have ever seen. They create a pure land in this world, and represent the hope of human beings."

Sun Yanjun said, "The CCP's power is based on lies and violence. They try to deceive the Chinese people and international society. But Falun Gong practitioners' clarifying the truth dispelled all the lies."

He said that ten years ago, the persecution prompted Falun Gong practitioners to clarify the truth to the world. Now more and more people worldwide have learned about it and recognize the evil nature of the CCP. Ending the persecution is many people's common wish. 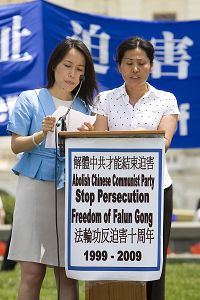 Geng He, the wife of Gao Zhisheng, a famous human rights lawyer, said that Mr. Gao Zhisheng was secretly arrested in China, because he defended Falun Gong practitioners. She said, "Although he is arrested, and we cannot contact him, we don't regret what we have done. Mr. Gao said it is a task for those who have high moral standards to end the Chinese people's sufferings. Falun Gong practitioners are fulfilling this task, and we want to join them." "Only if we dissolve the CCP can we end the suffering."

Statement from Dr. Yang Jianli, president of Initiatives for China

Dr. Yang Jianli is the president of Initiatives for China. He sent his representative Mr. Jim Geheran to the rally, who spoke on his behalf. In his speech, Mr. Jim Geheran quoted U.S. Speaker of the House Nancy Pelosi as saying, "We will not rest until there is freedom of speech and assembly and openness in China." He went on to note that the Capitol Hill rally was testament to Speaker Pelosi's words.

"What manner of governance is practiced by this Party that rules China today? It is the same government that sent tanks across Tiananmen in 1989 that took away the legs of Mr. Feng (a student protestor maimed for life in the Tiananmen Square Massacre, who was also in attendance at the Capitol Hill rally) and dashed the hopes of a generation of young students.

"What kind of government rules China today? It is a government that calls its citizens terrorists every time they petition for protection."

He went on to say, "The Falun Gong are not subversives, but people of peace. People of Forbearance, Compassion and Truth."

In closing, "I join hands with my fellow citizens, whether Falun Gong, Tibetan, Uyghur, Christian, doctor, or lawyer and speak with one voice, that we will not rest until the freedom to live, love, and worship hangs over the beautiful sky of China."

Falun Gong, also known as Falun Dafa, is a traditional Chinese spiritual discipline for mind and body. The practice involves slow, gentle movements and meditation. It is easy to learn, enjoyable to practice, and free of charge. Its principles are based on Truthfulness-Compassion-Forbearance. The practice began in China in 1992 and quickly spread by word of mouth throughout China and then beyond. Today, Falun Gong is practiced by over 100 million people in 60 countries. The main works of Falun Gong are available in over 30 languages.