On February 1, 2009, Divine Performing Arts International Company staged the Chinese New Year Spectacular in the Artpia Theater in Suseong District, Daegu, Korea. Well-known people in the Korean dance field had high praise for the performance. Mr. Park Jae Geun, manager of the Korean Ballet Company, said, "The Divine Performing Arts show had a vast and mighty energy current. It can enlighten people's spiritual character, and it was well worth seeing." 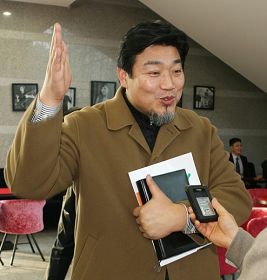 A well-known dancer in the modern world, Mr. Park Jae Geun said that the DPA performance was unique and exquisite. "The dance was performed in a totally new artistic form. The design was very new, and it manifested a grand and mighty beauty. This is very hard for any ordinary performance to display."

Mr. Park continued, "We are in fast-paced multimedia times. The DPA show used current technologies with wisdom. The visual effects and choreography were perfect. The important thing was that the show enlightened people's minds. To put it simply, the DPA show brought genuine and benevolent beauty to the audience."

Mr. Park added that the DPA show had new concepts as well, "We have seen many creative performances in Korea. The DPA show's main theme was consistent throughout the performance, from the opening to the conclusion."

Mr. Park studied ballet in Moscow, and he was a principle dancer and choreographer. He earned his Doctorate in Art at the Moscow State University. He was employed as a professor at Moscow Dance University and as Board Director of the Moscow International Ballet Renaissance Trustee Board.

At a time when the global economy faces a crisis, wherever Divine Performing Arts travels, it brings a warm wave of traditional Chinese culture, and it is highly praised by people in all fields. Mr. Park said, "Although the economy is not in a good state, truly outstanding performances are not be affected by it, which has been proven by the DPA shows."

Ms. Eom Okjia is responsible for carrying on Seungjeonmu, a traditional Korean folk dance. She is an honorary professor in the Department of Folk Dance at the Pusan National University. She said with excitement, "The graceful dances harmonized with the high-tech backdrops, and they seemed to bring us through the historical time-space. They showed ancient battlefields and ancient lives, and they reminded people of ancient Eastern civilizations."

Ms. Eom liked the fast rhythms and vigorous dances. She was most impressed by the "Dance of the Snowcapped Mountain." She said, "The title of the dance was excellent. I enjoyed watching the Tibetan young men dance with their long sleeves. They were in the highland with the snowy mountains as their background... it was so pure, full of life, warm, and truly blissful." 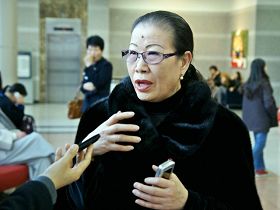 The dancers' moves were soft and open, and their costumes flowed naturally with divine grace, which made Ms. Eom feel like she was in a dream. She especially admired the miraculous backdrops, "The heavenly Gods, Buddhas, and deities suddenly descending then ascending back to the heavens felt so real, like it was happening right in front of us."

"What is unbelievable to me is that the DPA harmonized its grand energy current with beautiful nature." Ms. Eom said enthusiastically. "The DPA's performance guided the audience back to the roots of Chinese history and had the audience witness solemn and natural heavenly paradises, a part of the rich traditional culture."

Mr. Lee a traditional Korean dance expert, directs a dance academy. He had high praise for the divinity of the DPA show. He said, "Because the performance used many historical Chinese stories, watching the show was like watching five thousand years of Chinese culture."

Director Lee said that he knew that many Members of Parliament gave Divine Performing Arts positive comments, so he came to appreciate the show as well. "The show proved that the praises were well-founded. The dancers were just outstanding. The Chinese dances were so special, no matter which costumes or choreography."

The performance "Dance of the Yi" was performed by ethnic Yi girls, pure as flowers and wearing their colorful skirts, like heavenly ladies floating in the human world. This performance was Mr. Lee's favorite. He added, "Korea has a fan dance as well, but in the DPA dance 'Welcoming Spring,' the choreography was divinely beautiful, the costume colors were soft but pretty. The backdrop design was shockingly elegant. I want to learn from whoever designed it."

The parts that attracted Mr. Lee were the dancers' movements, their costumes, and the backdrop. After the show, Mr. Lee couldn't hide his enthusiasm, "The entire performance was of high caliber, especially the dancers' gentle and graceful hand movements. I wish I could borrow them to perform in Korean dances. Their spinning with their silk belts flowing was so different compared to Korean dance style." He finally added, "The story of Li Bai ("The Poet's Vision") was very educational. I truly want to encourage all of my students to come and see the DPA show."