People are shocked by the brutal persecution 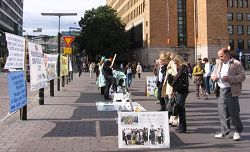 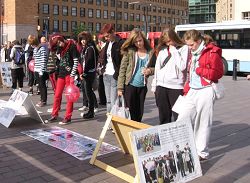 Passersby learn about the persecution in China 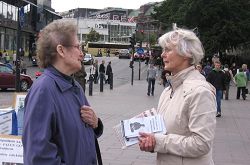 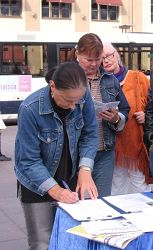 People sign the petition calling for an end to the persecution

One foreign student said in English that he once believed in Buddhism and knew that Falun Gong was persecuted in China, but he did not know how horrible it was. A practitioner told him, "We are here today to explain the facts of the persecution to everyone, and to ask to help stop the persecution."

One Finnish woman who travels with Iranian friends said to the practitioner, "The persecution is awful." She signed the petition showing her opposition to the persecution. She also explained what she knew about Falun Gong to her friend.

A gentleman from South Africa asked for material in English, including the Nine Commentaries on the Communist Party. He said that he wanted to know about Falun Gong and why the Chinese Communist Party persecutes it.

A Christian Russian woman said to a practitioner, "This kind of persecution must be stopped. It was also like this in Russia."

"People should all come to rescue Falun Gong practitioners," said one woman who passed by.

When two older people looked at truth-clarification flyers, which were being handed out by the practitioners, the man said, "The persecution happening in China is too cruel. You are doing a good job." The practitioner said, "You may sign to support us." The two seniors immediately signed to show their support.

After seeing the re-enactment of harvesting organs from living donors, a Chinese girl said, "This is impossible. I have never heard about this going on in China." Then she left. After a while, she came back to look again. She then said, "Nobody can do this." She did not dare to believe that what she saw and heard could be real. The practitioner told her, "We are speaking the truth. Read the Nine Commentaries on the Communist Party. When you know the truth about the Chinese Communist Party's evil nature, then you won't find it difficult to understand its behavior." Finally she accepted the truth clarification materials and a copy of the Nine Commentaries.