On September 1-2, 2007, Falun Gong practitioners in Russia held a "Folding Paper Lotus Flowers" activity for two consecutive days to clarify the facts on the Square of the Lenexpo Exhibition Centre, the largest facility of its kind in St. Petersburg. The place was packed with people as the Russian National Agricultural Economic Expo was taking place at the time, and coincided with "Knowledge Day," the first day back to school. Practitioners could hardly cope with the large crowd. 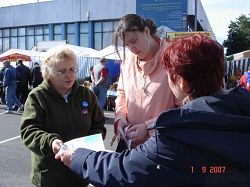 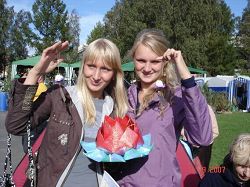 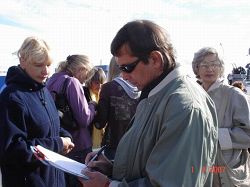 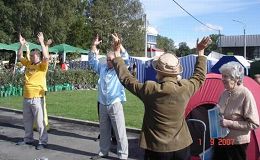 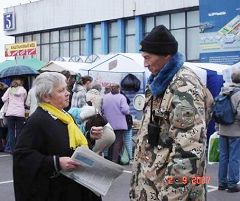 Practitioners showed people how to make paper lotus flowers, and handed out flowers to passersby, explaining that the lotus was a symbol of kindness, purity, and their good wishes for children all around the world, especially those in China. People were told that due to the Chinese Communist Party's (CCP) persecution, many practitioners have been tortured to death or incarcerated. Consequently, their children have suffered from this persecution as well. Many were moved to tears by the practitioners' plight. People expressed indignation towards the evil CCP's persecution of innocent citizens, especially its atrocities of organ harvesting from living Falun Gong practitioners for profit. One after another, they signed to support Falun Gong's protest. One lecturer at a medical school was stunned to learn the truth. He promised to expose the CCP's crimes of organ harvesting during his lectures.

Some practitioners continuously demonstrated the five exercises during the event, and the pure energy field attracted a crowd. Touched by the peacefulness of the practice, some onlookers followed along with the exercises while others asked to learn more about the Falun Gong practice.

During the event there were also many who already knew the facts about Falun Gong. They took the initiative to greet the practitioners. Knowing the true facts, they could tell right from wrong, and they stepped forward to support Falun Gong practitioners' protest against the persecution. Many said that their stressed minds became relaxed, and they were very thankful to the practitioners.