Malaysia: Chinese Students and Others Seek Information about Quitting the Party in China (Photos)

On March 2, 2007, the Service Center for Quitting the Party in Malaysia came to Nilai, where thousands of Chinese students attend college, to hold a rally in support of withdrawals from the Chinese Communist Party. 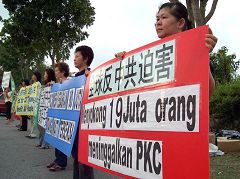 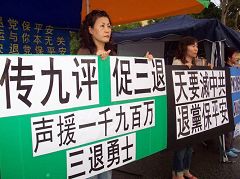 The service center has previously held a rally in Nilai. The organizer said that the situation in Nilai has changed significantly since the last rally. Many Chinese students, who previously didn't dare accept the materials, now enthusiastically learn more about the trend to quit the Party. He said, "Although it rained during the rally, it was successful. I believe that the situation will become better and better. We will come to Nilai again in the future." He called upon the Chinese students to pass along the information about quitting the party to their families and friends in China.

More and more people in Malaysia acknowledge the trend to quit the party. A columnist for a local Chinese newspaper saw the Service Center for Quitting the Party in Kuala Lumpur and wrote an article about it. He also raised some questions.

The service center volunteers responded to the columnist and explained what quitting the party meant. They explained why the CCP is not the same thing as China. The central article, which reminded people that the CCP tries to deceive the world with falsified economic development reports, was published as well.

The rally organizer said that more and more people from different social classes are interested in learning about the trend to quit the party. On one occasion a diplomat from an embassy saw their activity and contacted them for more information.

The organizer said that it was very meaningful to have such a rally in Nilai, where a lot of Chinese students attend college. He said, "As long as we persist, they will learn more and more about the Nine Commentaries on the Communist Party and quitting the Party."

“Malaysia: Building a Bridge to a Wonderful Future (Photos)”