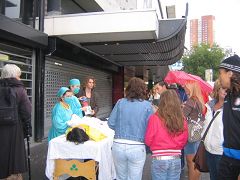 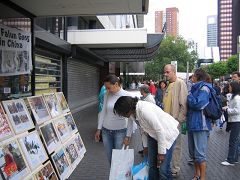 People stop to learn the facts of Falun Gong

Passers-by stopped to read the informational boards and watch the reenactment. Many said they were aware of the Chinese Communist regime's organ harvesting from Falun Gong practitioners from TV news reports. They added that practitioners' face-to-face truth clarification made them feel extremely upset and shocked by the shameless crimes of the regime. A lot of people signed their names to support practitioners' anti-persecution efforts. They also encouraged practitioners to continue exposing the Chinese Communist regime's ruthless human rights infringement to all of the people of Holland.

The practitioners also demonstrated the five sets of Falun Gong exercises. As the graceful music propagated around the square, a lot of pedestrians were attracted and came over to listen and watch.