(Clearwisdom.net) On July 13, Mr. Edward McMillan-Scott, the Vice President of the European Parliament (EP), met David Kilgour, who was on a special trip to inform the EP about his investigative findings on the organ harvesting claims. The two discussed the possibility of jointly conducting an investigation on the Chinese Communist Party's atrocities of organ harvesting. 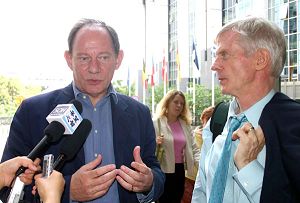 Mr. McMillan-Scott said that Kilgour's investigation report is very important and he believed that organ harvesting from living people is widespread in China and Falun Gong practitioners are the victims. He said that the report collected available information at the time and provided very important information.

He pointed out that the report depicted a terrifying and horrific situation in China and provided evidence of genocide happening in China.

He told the reporter that he and Mr. Kilgour had established contact and they would work together to request the United Nations, European Parliament and other authorities to pressure the Chinese government to stop such crimes and urge the International Court to bring all perpetrators to justice.

“Washington, DC: Falun Gong Practitioners Rally Near the White House to Call for Actions to End the Atrocities of the CCP (Photos)”