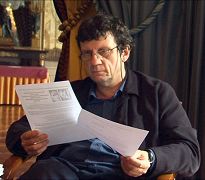 The Minster of the Department of Culture, Mr. Patrice Mugny is reading truth-clarification literature

On May 9, 2006, three representatives from the Swiss Falun Gong Association visited the Geneva City Council. They were received by one of five city councilors, the Minster of the Department of Culture, Mr. Patrice Mugny and some others. The Swiss Falun Gong Association representatives explained to them about the CCP's crimes of organ harvesting from living Falun Gong practitioners and then cremating the bodies to destroy the evidence, which has been recently exposed by several witnesses, meanwhile requesting that relevant organizations in Switzerland actively support and participate in the investigations of the United Nations and other international groups into the claims of the Chinese Communist authorities removing Falun Gong practitioners' body organs while they were still alive. Mr. Patrice Mugny made the following statement on this:

"I am Patrice Mugny, a member of the Geneva City Council. On behalf of the City of Geneva I received three representatives of the Falun Gong spiritual movement, because we hoped to understand the situation of the persecution suffered by Falun Gong practitioners in China. We will pass on their request for an international investigation to the United Nations and the Swiss Foreign Minister Madame Calmy Rey, so that the investigation can proceed as soon as possible.

We know that the CCP action is an example of violating human rights. Not only do they torture people, they also take the organs from death row criminals, and today they are even removing organs from living, innocent people. The CCP only cares for economic profit but has no regard for the suffering of others. Falun Gong practitioners have become the main victims of the live organ harvesting, and terror has come to such a brutal extent."