(Clearwisdom.net) On October 8, 2006, Falun Gong practitioners from northern California were invited to participate in the 138th Columbus Day Parade in San Francisco and received warm welcome from the sponsor and spectators on the way. Don Casper, member of the parade organization committee, said that the performance of Falun Gong's Divine Land Marching Band was superb and that every parade in San Francisco should invite Falun Gong to participate. "Falun Gong is an indispensable group." 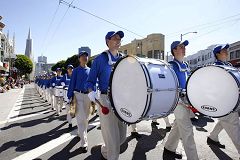 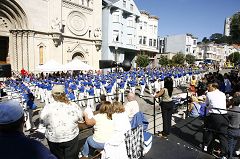 Member of the parade organization committee says that the performance of Falun Gong's "Divine Land Marching Band is superb! Falun Gong is an indispensable group." 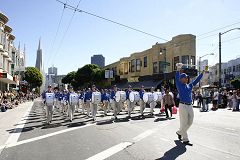 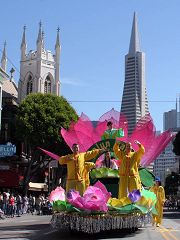 Clarifying the truth in various ways 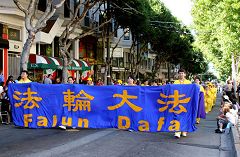 Bringing good things wherever they go 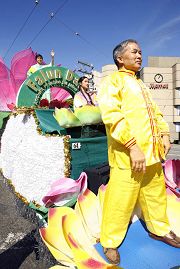 Falun Gong practitioners bring a sense of wonder to the audience 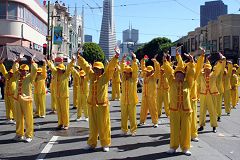 The parade had 130 entries. The procession set off from famous tourist spot Fisherman's Wharf in San Francisco, marching along almost the entire length of Columbus Boulevard, and then wound its way down the major streets between Chinatown and Italian City and finally reached the central park in Italian City¡XWashington Park. The entire route was 1.5 miles long. The sponsor estimated there were about 400, 000 spectators.

The weather was fine and warm that day in San Francisco. Falun Gong practitioners' contingent was led by the Western US Divine Land Marching Band. They performed "Falun Dafa is Good," "Beautiful America," and other selections. Behind them were a float and exercise demonstration group, and a Sword Dance performance by young practitioners from the Minghui School. Some spectators on the way followed the music played by the marching band and danced to the rhythmic beat. Some called out their approval, and some applauded. Some people learned to do the movements with the practitioners. Some people who already knew the facts said, "Stop the persecution of Falun Gong."

When the practitioners' contingent passed by the main stage, the sponsor of the parade said, "Falun Gong practitioners have taken part in the Columbus Day Parade for the fifth year. Their group is unique and becomes better year by year. We forever welcome their participation in our parade!"

Don Casper, member of the parade organization committee, said that the performance of Falun Gong's Divine Land Marching Band was superb! "They have strong discipline, march in step, and the music is beautiful. Every parade in San Francisco should invite Falun Gong to participate. Falun Gong is an indispensable group."

The police chief said that the Falun Gong contingent was the shining point of the entire parade, full of color and harmony and peace.

Spectators Debra and her husband Mike watched the practitioners' performances and said, "Terrific, Fantastic." When they learned that the Chinese Commerce General, influenced by the Chinese Communist Party, refused to let Falun Gong participate in San Francisco's New Year's Parade, they were very angry. Debra said that no matter what a person's belief is, every group should be allowed to take part in the parade. Mike said that Falun Gong should participate in next year's New Year's Parade. If there were still any obstacles, he would write to his congressman to make sure that practitioners can participate in the parade.

Some tourists took photos with practitioners' contingent in the background. Two tourists from Mexico said that they had received Falun Gong materials and would read them to their friends.

Some audience members watched the Divine Land Marching Band practice before the parade started. One of the spectators, Joseph Pedigrew, said that he felt practitioners' performance was great and their rhythm was very strong. When they played, they had fully focused on the effect of each note.

“Turkey: Introducing Falun Dafa at a Public Event in the City of Mersin (Photo)”