Turkey: Introducing Falun Dafa at a Public Event in the City of Mersin (Photo)

On September 18, 2006, the Mersin City Council held an event to commemorate the city's founding fathers. About 500 local people attended. Falun Gong practitioners were invited to introduce Falun Dafa before the opening of the commemoration. A city council official said, "Falun Dafa advocates Truthfulness- Compassion-Tolerance; this is just what we human beings should spread and follow, so today we are inviting Falun Dafa cultivators to introduce this beneficial practice." 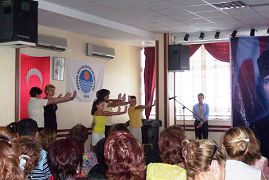 A representative for the practitioners, Ms. Cansin, first went onstage to give a brief introduction of Falun Gong. She told the audience that Falun Dafa is an ancient cultivation method which originates from traditional Chinese culture, teaching people to cultivate following the principle of "Truthfulness-Compassion-Tolerance." Falun Dafa can help people regain physical health and upgrade morality. She also mentioned how she had survived and recovered from being a very ill patient to a very healthy person through practicing Falun Gong. As a result, she wanted to introduce Falun Dafa to everyone.