(Minghui.org) Today's news from China includes incidents of persecution that took place in 10 cities or counties in 6 provinces, where at least 33 practitioners were recently persecuted for their belief. 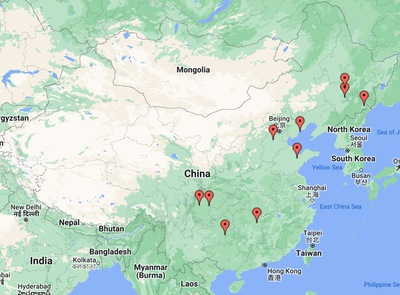 Twelve people including two police officers and the director of the Shuangliu District Political and Legal Affairs Committee went to Jia Xingrong’s home on August 27, 2022. They ransacked it and confiscated a set of Falun Gong books, two video players, 8 radios, 68 CDs, and other personal belongings. Jia Xingrong was taken to the Peng Town Police Station for interrogation and was released that evening.

Ms. Ma Fang from Jilin City and Ms. Sun Yuxia from Dehui City were arrested by three officers from the Dongjuzi Police Station in the Yongchang Community of Jilin City around 5 p.m. on August 27, 2022. The two practitioners were taken to the Shulan Detention Center.

A group of people from the Zhihe Town 610 Office, the Guangming Police Station in Zhihe Town, and the Pengzhou City Police Department, went to Mr. Zhao Qiang’s home on August 25, 2022. They ransacked it and arrested him.

Ms. Zhang Shuhua was arrested by officers from the Baoshou Township Police Station in the township market on August 30, 2022.

Six practitioners were arrested by officers from the Anshan Town Police Station in the Anshan Town Market in Changli County on August 16, 2022. They are Mr. Wang Qinghua, Ms. Wang Ying, Ms. Shen Yanru, and Mr. Chen Dong from the Feigezhuang Village, Ms. Bai Hanzhi and Ms. Xuan Xiaowen are from Wugezhuang Village in Matuodian Township.

Ms. Deng Subi went to the Shuicheng Police Station in Jindang County on the morning of August 17, 2022, after receiving a call the previous day. Ms. Deng refused to cooperate and kept clarifying the truth to the officers.

Ms. Deng received a call from the police station on the morning of August 24, 2022, and was told to sign on the indictment, which she refused. The officers then went to her home and pressured her husband to cooperate with them.

Ms. Zhang Chengxiu was harassed at home by officers from the Jinqiao Town Police Station in Pengxi County on August 21, 2022. They searched her home and confiscated four copies of Minghui Special and two MP3 players.

Five officers including Wu Tong from Kaili City Police Department and Zhou Junwu from the Chengxi Police Station went to 80-year-old Yang Zhongxiu’s home on May 19, 2022. Yang was not there. They confiscated Falun Gong books, a media player, and other items.

Practitioners in Changsha County were harassed at their homes by people from local communities, local police stations, and different government branches, on July 14, 2022. These people confiscated the practitioners’ Falun Gong books, photographed the practitioners, and pressured them to sign documents.

Mr. Dou from Wumei Township, over 70, was arrested and detained for more than 10 days. Ms. Zhao Jian, over 60, who lives in the same town and is a doctor, was also harassed.

Six officers including Chou Tiegang from the Changsha County Police Department and Long Xiangdong, deputy of the Langli Town Police Station, went to the home of Mr. Zou Yeda and his wife Ms. Zhang Feng. They confiscated Falun Gong books and truth-clarifying materials. They attempted to arrest the couple but failed.

Five police officers from Wujiang District of Suzhou City arrested Ms. Chi Xiaomei in Kuiwen District, Weifang City, on January 25, 2022. They confiscated two Falun Gong books and some truth-clarifying materials. Ms. Chi was taken to the Dongming Police Station for interrogation. The police tried to find out who mailed the truth-clarifying letters to the Wujiang District Court.

Three people from the Wujiang District went to Ms. Chi’s home in mid-July 2022. They pressured her to give up practicing Falun Gong and threatened to arrest her if she did not cooperate.

A group of officers from the Wujiang District Police Department knocked on Ms. Chi’s door on August 23, 2022. They tried to deceive her by claiming to inspect hygiene. Ms. Chi did not open the door.

Liu Feng, Sun Qinghua, Sun Qingju, and Wang Yanchun were arrested by officers from the Hebei Police Station in Helong City, Yanbian Korean Autonomous Prefecture, on August 29, 2022. Sun Qingju was released on August 30, 2022, and the others were detained in the Helong City Detention House.

Ms. Zhou Fengqiong lives in Tashui Town, Wenjiang District. Ten people from a brainwashing center went to her home on July 11, 2022. They confiscated her Falun Gong books, a photo of Falun Gong’s founder, and ten CDs. After Ms. Zhou refused to sign the paper they prepared, they took her to the Wanchun Town Government Office and continued to pressure her. Ms. Zhou was not allowed to go home until late that night.