(Minghui.org) Today's news from China includes incidents of persecution that took place in 17 cities or counties in 9 provinces, where at least 57 practitioners were recently persecuted for their belief. 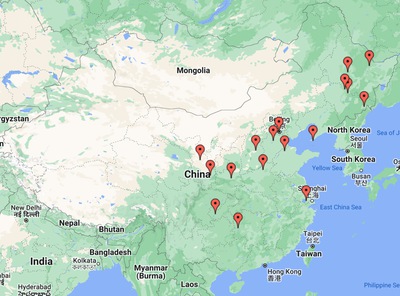 1. [Hegang City, Heilongjiang Province] Mr. Yang Yongying to be Released After Being Detained for 17 Years

Mr. Yang Yongying was arrested on September 7, 2005, and was sentenced to 17 years in prison for broadcasting Falun Gong facts by intercepting cable TV. He has been detained in the Hulan Prison since then. His prison term will expire on September 6, 2022.

Mr. Yang suffered a lot during his detention. He was first detained in the Assembly Ward in 2006 for almost a year. He was often punished by being made to stand for long hours until midnight and was badly beaten. As many as nine inmates shared one bed which was only 1.8 meters by 2 meters. One could only sleep on one’s side. The environment was so bad that Mr. Yang developed scabies all over his body. Each day seemed like a year. After he was transferred to a regular ward, he was deprived of sleep for seven days and seven nights. He was detained in an isolation cell for seven days in 2017 because he refused to wear the prisoner uniform.

Ms. Tong Kunqing and Gao Xiufeng were told to go to the village office to meet the police officers there on August 23, 2022. Gao did not go. Instead, Guo left home. Ms. Tong’s husband was deceived and took her there. She was arrested and taken away. She is detained in the Dingzhou Detention House.

Seven practitioners were arrested in different places in Laoling City on July 21, 2022. They are Mr. Deng Hongtao, Ms. Zhang Xia, Wang Feng, Ms. Zhao Fengying, Huang Shaolong, Ms. Kang, and Wu Xuelin from the Zhifang Village. The practitioners are incarcerated in the Dezhou Detention Center. The cases against some of them have been submitted to the procuratorate.

4. [Xinxiang City, Henan Province] The Cases Against Six Practitioners Submitted to the Procuratorate

Ms. Zhao Xiaoli was arrested in September 2021. She has been under surveillance and any practitioners who contacted her were implicated. Some were detained; some had their homes raided, and some were taken to the local police stations and pressured to sign guarantee statements. The cases against six practitioners have been submitted to the Weibin District Procuratorate and they will be tried in court within a month. The six practitioners include Ms. Zhao Xiaoli, Mr. Zheng Xingquan, Ms. Wang Suying, Jiang Zhonghua, Wang, and Chen Yuhua.

Eight or more practitioners from the Hecheng District were arrested at their homes or on the road on August 29, 2022. They are Ms. Tang Qingying, Mr. Zhong Liancong, Ms. Huang Yuanqiao, Ms. Xue Baoyu, Ms. Chen Quanying, Ms. Yin Qiuyang, Ms. Xiao Guiying, and Ms. Wu Fangming. During the process, the police used a master key to open the doors or broke the locks on the doors to enter some practitioners’ homes. Mr. Zhong Liancong was taken to a detention center and the others have been released.

Ms. Deng Xiaoxia was arrested again by officers from the Chengguan Town Police Station in Lantian County around August 12, 2022.

Ms. Liang Yuling was arrested while working as a nanny in Xi’an City.

Mr. Chen Mingxi from the Yubei District was arrested last year. The police ransacked his home and confiscated two sets of Falun Gong books, a printer, laptop computer, cell phone and over 13,000 yuan in paper bills imprinted with Falun Gong facts. Mr. Chen was later sentenced to four years in prison and fined 13,000 yuan by the Jiangbei District Court.

It is learned recently that Mr. Chen appealed to the No.1 Intermediate Court but the original verdict was upheld without a new hearing.

The police went to Zhang Sufeng’s home at 7 a.m. on July 28, 2022. They ransacked the home and confiscated Falun Gong books, a computer, cell phone, USB drives, truth-clarifying materials, and other items. Zhang was taken away to have a physical examination and was released after midnight. Zhang was taken to a brainwashing center on the afternoon of August 8, 2022, and returned home on August 11, 2022.

The police went to Ms. Kou Rumin’s home in Jinzhan Township at 6 a.m. on July 28, 2022. They ransacked her home and confiscated her Falun Gong books, truth-clarifying materials, printer, and paper bills imprinted with information about Falun Gong. Ms. Kou was later released on bail pending trial.

Ms. Wang Lixia from the Qinzhou District was arrested at the residential community where her mother lives, at noon on August 30, 2022. She was taken to the Zhaojiao Detention Center.

Five officers from the Hehuashan Town Police Station went to Mr. Zhang Guangsheng’s home in Hehuashan Town at 2 p.m. on August 8, 2022. They confiscated a photo of Falun Gong’s founder.

Ms. Yu Lanfang was tried by the Wujiang District Court on June 14, 2022. Her daughter received a call from the court on the morning of August 31, 2022, and was informed that she should accompany her mother to the court on September 5 to go through the bail procedure.

Plainclothes officers from the Zhengyang Police Station arrested Zhao Lianying on the morning of August 26, 2022, for distributing information about Falun Gong. They then ransacked her home and confiscated her Falun Gong books, truth-clarifying materials, and a cell phone. Zhao was taken to the police station but was released that evening due to high blood pressure.

Three family members including Mr. Zhang Lianqing, his wife Ms. Liu Guiying, and their 32-year-old son Mr. Zhang Fengming, were followed after they spray-painted the words, “Falun Dafa is Good,” in a public place. They were arrested at home on August 27, 2022. Five more practitioners were also arrested including Ms. Liu Lianbo, Ms. Li Xiaomin, Ms. Bai Shujuan, Ms. Zhu Xiuying, and Ms. Zheng Lanqin (who is in her 70s). The police are still monitoring Mr. Zhang’s home. At present, only Ms. Liu Lianbo was released due to her poor health.

Two people from the Shulan City Procuratorate who were in a police car went to 81-year-old Ms. Chen Yunfang’s home at 10 a.m. on August 30, 2022. They pressured Ms. Chen to sign some documents which she refused.

Ms. Zhang Xiuzhen from the Pingchuan District was harassed and threatened by Yang, the mayor of Baoji Town. If Ms. Zhang refused to sign a guarantee statement, her two sons would be suspended from their jobs; her husband would not be allowed to work. Her family would be kicked out of their rental house and all the residents in the area would be told not to rent to them.

Ms. Qi Xiuying, a retiree from the Jing Coal Company in Pingchuan District, had her home raided in August 2022.

Ms. Zhu Yuying from the Pingchuan District was searched on a train and was found to have the book Zhuan Falun. She has been harassed and threatened by police since then.