Almedalsveckan, also known as the Almedalen Week, is an annual event that takes place in Almedalen, a park in the city of Visby on the Swedish island Gotland. It took place between July 3 and 7 this year. During the event, representatives from the major political parties in Sweden would give speeches and have discussions with the public. 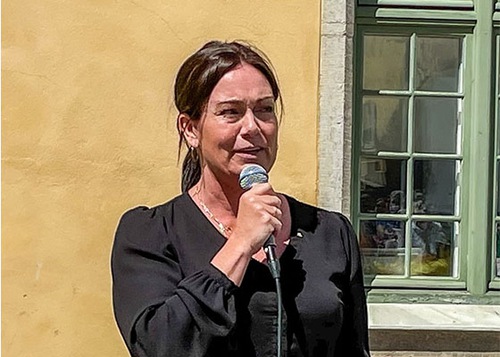 During her speech, MP Ann-Sofie Alm remarked that the brutal persecution of Falun Gong practitioners has been going on for more than two decades, after the Chinese Communist regime declared peaceful practitioners a threat to national security. The true reason for the persecution is that the regime fears the practitioners who believe in the moral principles of Truthfulness, Compassion, Forbearance and who improve themselves through peaceful meditation and spiritual refinement. The regime throws practitioners into prison without following the law.

She pointed out that the worst part of the persecution was the forced organ harvesting. She noted that while patients outside of China often had to wait many years to get a matching organ, they could simply make a phone call to order a heart with a Chinese hospital and schedule a time for the transplant, which can be arranged based on their holidays and flight tickets. If someone is willing to pay more, they can get a fresh, healthy heart from a Falun Gong practitioner, with the option of getting a donor under the age of thirty, or even fifteen years old.

MP Alm said that she read the judgment by the China Tribunal chaired by Sir Geoffrey Nice QC, the prosecutor of Slobodan Milosevic, which concluded that a significant number of Chinese prisoners of conscience had been killed in the massive organ transplant industry and that Falun Gong practitioners are the main source of organs.

She stated, “I read the horrific and horrifying testimonies, some of which had been subjected to inhuman abuse in prison, and I could not understand how one person could do such a cruel thing to another! I’ve read testimonies of prison guards who deeply regret it, and a surgeon who said the prisoner was still alive when he inserted the scalpel into his chest! I’ve also seen maps of Chinese organ transplant hospitals built at strategic locations, just a wall away from those big prisons.”

“I will never forget and I will never be silent! The world must be made aware that the Chinese Communist Party is committing the most vicious crimes against humanity.” she stated.

She continued, “The Chinese Communist Party tried to silence me, to silence me through intimidation. But they can’t! Because I am not alone. The Swedish government and people are waking up and they are watching the heinous crimes that are happening in China.”

“Let’s work together to stop this illegal organ trafficking which is murdering prisoners of conscience! It is a disgrace to our humanity to allow it to continue.” She called on the Swedish government, the European Union, the United States, as well as institutions and organizations at all levels of free society to join the effort to stop the killing.

She added that the U.K. has set a good example to the world. After the China Tribunal’s judgment, the U.K. has passed a law to restrict their nationals from traveling to China for organ transplant. Now only organs donated in the U.K. can be used for transplants in the U.K.

In her final statement, she called on the world to “stop the illegal organ trade and bring those who commit the crimes before an international court to be prosecuted for what they have done. Let’s work together, as one, to stop the heinous crimes against humanity that are taking place in China.”