(Minghui.org) Falun Dafa practitioners from Taichung and Yunlin County in western Taiwan held a candlelight vigil on July 10, 2022 to mourn fellow practitioners who have lost their lives in the persecution that began in China 23 years ago. Many elected officials from Taichung City joined the event held at Wen-Hsin Forest Park. They urged the Chinese Communist Party (CCP) to end the brutality. 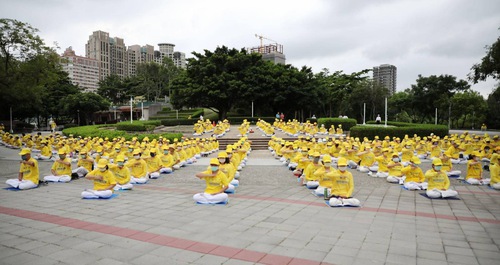 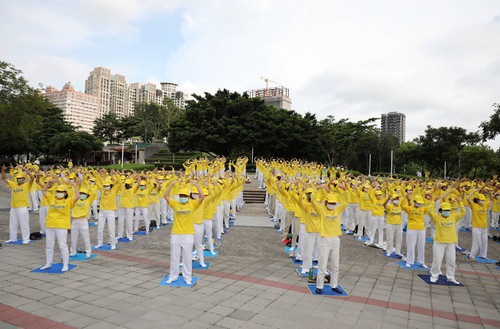 Practitioners started off the event on July 10, 2022 by doing the Falun Dafa exercises at Wen-Hsin Forest Park in Taichung.

Practitioners began the event by doing the Falun Dafa exercises. They displayed posters and passersby read them and learned how the practice was popular in China before it was persecuted by the CCP in 1999. 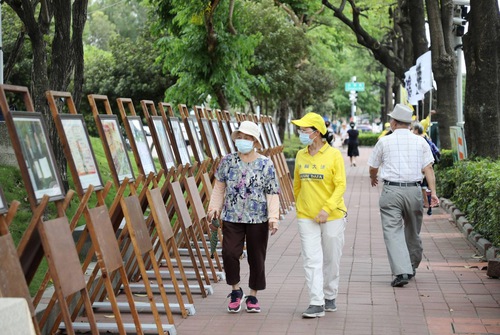 A practitioner discusses the information on the posters. 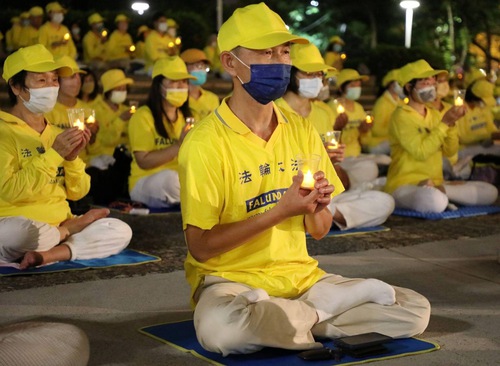 Freedom Has No Borders 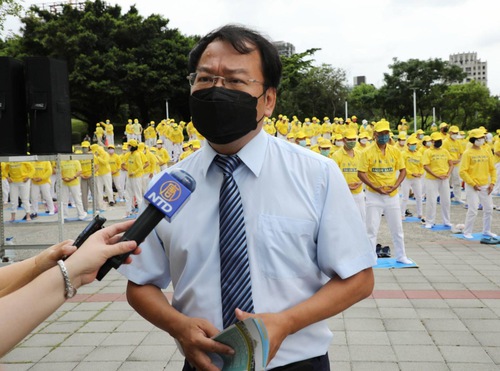 Hsieh Chih-chung, Taichung city councilor said, “I cannot understand why such a peaceful group is brutally suppressed in China.”

Several city councilors and other officials spoke during the event. They thanked practitioners for their courage and persistence in the past 23 years to expose the CCP’s human rights violations. Hsieh Chih-chung, who came to the event very early, said he saw practitioners doing the exercises in the park every morning. “I cannot understand why such a peaceful group is brutally suppressed in China,” he said.

He said he is thankful for the freedom in Taiwan, which also highlights the importance of supporting those persecuted by the CCP. “We must step forward to help Falun Gong practitioners so that this horrific persecution will come to an end soon.”

He added, “The forced organ harvesting, in particular, shows the CCP is inhuman. Although the wish to be healthy is good, doing so by killing another person is wrong. In fact, freedom has no borders. It is basic humanity for every one of us to help Falun Gong practitioners.” 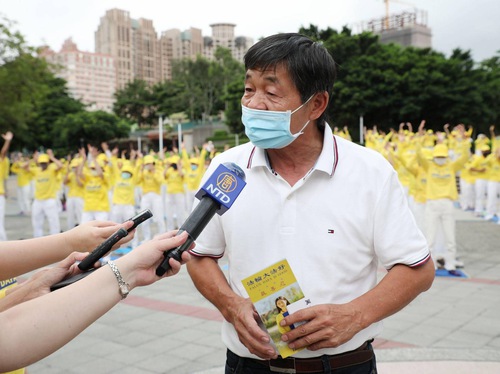 Another city councilor Wang Chao-kun said, “Events like this are very important. It has been an arduous journey for Falun Gong practitioners to stand up against the CCP’s brutality in the past 23 years. During these years, practitioners have also inspired the general public with the spirit of Truthfulness-Compassion-Forbearance.” Councilor Wang Chao-kun said he has observed practitioners for years and knows they apply these principles in their daily lives, which shows the benefits of the practice.

He added, “That is why we all need to say ‘No’ to the CCP. We are here today to wake up people’s consciences so that all Taiwanese will support Falun Gong practitioners and condemn the persecution.” 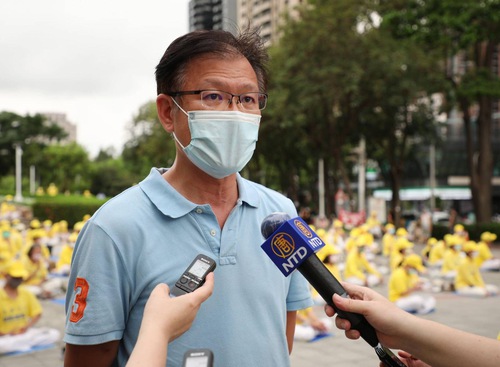 “The pursuit of human rights and freedom is a universal value,” said city councilor Wang Li-jen. “But the CCP’s totalitarian regime ignores human rights and mistreats Falun Gong practitioners, even harvesting their organs while they are alive. This is something none of us can accept,” he said. “We have to respect life and absolutely condemn such atrocities.”

As an elected official, Wang said it is his responsibility to help Falun Gong practitioners be treated fairly. “Practitioners have been working tirelessly in the past 23 years to raise awareness of the CCP’s brutality. We need to let the entire world know about the crime of organ harvesting. I also hope more people will embrace the principles of Truthfulness-Compassion-Forbearance because they are important for everyone,” he added.

Sitting together with practitioners during the candlelight vigil, Xu Zhishun, chief secretary of the Cultural Affairs Bureau of Taichung City Government, said he felt surrounded by positive energy.

Through the film Unsilenced, Mr. Xu said he learned how Falun Gong has been suppressed by the CCP since July 1999. “It is a tragedy that such a good practice that improves mind and body is mistreated in China. Some practitioners are very healthy and they seldom need to see doctors.

“Despite these huge benefits, the CCP nonetheless chose to suppress this peaceful group and even killed practitioners for their organs,” he said. He called on Taiwan residents to be aware of organ tourism and stay away from it. 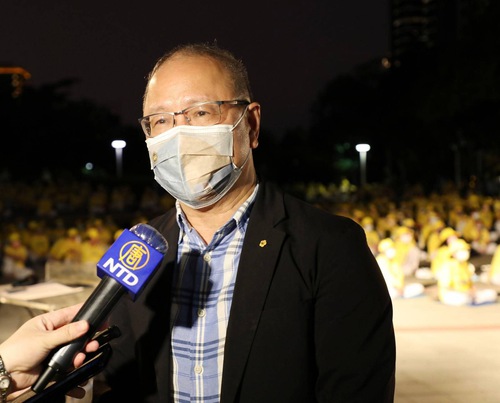 Liu Kau-lung, Chairman of the National Architects, Association of the Republic of China

Liu Kau-lung, former Taichung city councilor and Chairman of the National Architects, Association of the Republic of China, emphasized that the event is held to counter the CCP, not China. “In fact, the CCP is against humanity and it is afraid of Falun Gong along with the principles of Truthfulness-Compassion-Forbearance. These principles are in line with China’s traditional values and they are important for mankind. In spite of the hot temperature, Falun Gong practitioners are gathering here peacefully to pursue their legal rights, which is inspiring for the entire world,” he said.

He added, “The crime of organ harvesting is outrageous and only a regime like the CCP would do it.” Liu said he hopes more Chinese people will sever their ties with the CCP and join the world to oppose the atrocity.

“Couple in Their 80s Put on Probation for Practicing Falun Gong”