(Minghui.org) Today's news from China includes incidents of persecution that took place in 12 cities or counties in 6 provinces, where at least 16 practitioners were recently persecuted for their belief. 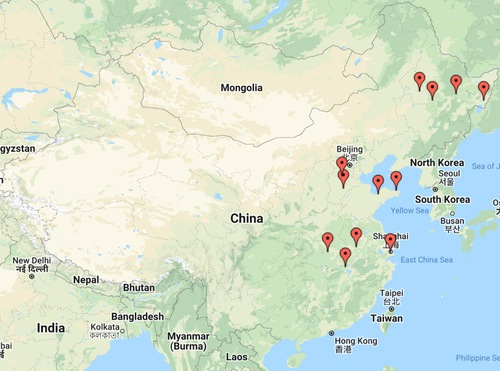 Ms. Zhang Guiqin was arrested and taken to the Hengshui City Detention Center around the end of 2019.

It was reported recently that she was sentenced to three years in prison in 2020 and held in the Shijiazhuang Prison.

Mr. Yang Yajun, around 50, is a Level One division rank researcher (entitled to deputy-bureau rank benefits) in the Energy Conservation and Comprehensive Utilization Division of Anhui Province Economic and Information Technology Department.

In April 2021, Mr. Yang posted truth-clarification leaflets in universities in Hefei City, and was seen by high-definition surveillance cameras. The police took great pains to locate him. However, the police would not clearly state that he was arrested for practicing Falun Gong. The Chinese Communist Party (CCP) has persecuted Falun Gong for more than 20 years, yet high-ranking officials like Mr. Yang have held firm to their belief in the spiritual practice. The authorities are afraid of attracting too much attention and raising public awareness by openly targeting people like Mr. Yang. As a result, they resorted to dismissing Mr. Yang from his public servant position on the grounds of economic problems. Mr. Yang is being held in the Hefei City Detention Center.

Mr. Yan Ji was arrested for talking to people about Falun Gong in the countryside on May 24, 2022. He is being held in the Changsong Brainwashing Center, which is located in Bofan Town.

Mr. Yan is a police officer of the Public Order Division of the Anlu City Police Department. He is in his 50s and is an honest and kind person. This is the second time he was taken to a brainwashing center.

While on her way to work Ms. Guo Xiurong left her scooter on the side of the road, and walked to a bus stop to tell others about Falun Gong around 10 a.m. on May 26, 2022. A group of police officers spotted her. They rushed over, arrested her, and one of the officers took her scooter and drove it away.

That afternoon, Ms. Guo’s husband went to two police stations looking for her. He learned that she was arrested by the Balihu Police Department, the Zhangjiadu Community in the Chengxigang area, Chaisang District, and the Qilihu Police Station. The officers also ransacked her home.

Ms. Zhao was later taken to the Dingzhou City Detention Center, where she was denied admittance on the grounds of the pandemic lockdown.

Two officers took Ms. Zhao back to the police station. One officer slapped her twice before they notified her family to come take her home.

Ms. Han Ruizhi, 64, lives in Hejiang Village, Dalianhe Town. In early April 2022, village Party secretary Xing Huiyong, security director Chen Wencai, and two officers in uniform from the Dalianhe Town Police Station went to Ms. Han’s home and told her to sign some paperwork, which she refused. The officers used their mobile phones to photograph her home. They threatened to arrest her if she did not sign.

More than ten days later, around mid-April, these people went to Ms. Han’s home again. They asked, “Do you still practice Falun Gong?” She said, “In the past, I had illnesses all over my body. After I practiced Falun Gong all my illnesses were resolved and I became healthy. I am energetic now.” The officers began to rummage through her possessions. They confiscated a copy of Zhuan Falun and manuscripts of truth-clarification letters. They told Ms. Han to get in the car because they were taking her to the police station. In the car Ms. Han continued to clarify the truth to them. When they arrived at the police station, an officer asked her, “Who are you in contact with?” and then he said, “Sit down!”

After a while, Ms. Han’s legs became weak and she could not open her eyes. When they helped her walk to another room Ms. Han began trembling and collapsed. They called in a doctor, and the doctor said that she had heart problems. They helped Ms. Han to sit in a chair in the hallway. Ms. Han still could not open her eyes. Her children came and they wept when they saw her condition. Director Wang Dongjun told her children to take her home.

Ms. Yin Lihua lives in Yonghe Village, Daotaiqiao Town. On the morning of May 7, 2022, officers from the Daotaiqiao Town Police Station went to Ms. Yin’s home. At that time Ms. Yin was not at home, but her husband was. The officers entered their home and ransacked the place without showing any documents. They confiscated more than 10 Falun Gong books, photos of the founder of Falun Gong, and over 600 yuan in cash.

On July 20, 2021, the police ransacked the home of Ms. Ma Guizhen of Dongfanghong Forestry Bureau. She was detained by the Domestic Security Division on July 22 for five days.

Ms. Zhao Yukun from Yanshou County was harassed at home by a group of officers from the Chengbei Police Station at noon on May 24, 2022. They confiscated small speakers, a video camera, a cell phone, two sets of Master’s lectures given in various places, Volume 12 of Master’s lectures given in various places, Hong Yin VI, and 3,000 yuan in paper bills with information about Falun Gong written on them.

Ms. Zhao was taken to the police station but was released after midnight.

Mr. Sun Wenzhong has been held in custody for nearly five months. He was transferred to the Daqing City No. 2 Detention Center. His case was submitted to the Ranghulu District Court.

Mr. Sun Deguo and Mr. Dai Zhidong were reported to the police for handing a Falun Gong booklet to a person around 11 a.m. on January 8, 2022. They were arrested and taken to the Lindian Police Department by four or five officers.

Around 4 p.m. Wei Fang, head of the Lindian County Domestic Security Division, led someone to unlock the house shared by Mr. Sun Deguo, Mr. Zhang Liguo, and Mr. Sun Wenzhong. Without showing any documents, they ransacked the place and confiscated computers, cash, bank cards, and books.

The case against Mr. Xu Yongqing was brought to the Liandu District Court in Lishui City, Zhejiang Province, on May 18, 2022. He has been held in the Longquan City Detention Center for over seven months.

Ms. Li Xueqiu from Huancui District was arrested by three officers from the Wenquan Police Station while she was doing nucleic acid tests around 7 or 8 a.m. on May 24, 2022. The officers ransacked Ms. Li’s home and took her to the police station. She was handcuffed, searched, restrained in an iron chair, and fingerprinted. It was not until 2 or 3 p.m. that officers contacted her son to take her home.

Officer Han Jinguang from Tushan Town and two other people went to Ms. Dong Liyuan’s home on the morning of May 23, 2022. They had been there many times before but did not see her. They said that Ms. Dong was reported to the police for talking to people about Falun Gong. They ordered her to go to the police department.

After Ms. Dong went there, the officers pressured her to sign paperwork and wanted to take blood samples from her, which she refused. Ms. Dong was later taken back by her family.