(Minghui.org) The founder of Falun Dafa—Mr. Li Hongzhi—introduced the practice to the public on May 13, 1992. Falun Dafa has since spread by word of mouth in China and all parts of the world, including Norway, which is located in Northwest Europe.

To celebrate the 30th anniversary of Falun Dafa’s introduction, practitioners in Oslo held activities to introduce the spiritual practice outside the Parliament building in central Oslo on May 13, 2022. They later peacefully protested outside the Chinese embassy and called for an end to the persecution in China.

Practitioners convened at a public library in Oslo on May 15 for the second experience sharing conference in Norway. They spoke about how practicing Falun Dafa made them better people, and they expressed their gratitude to the founder for the opportunity to practice cultivation. 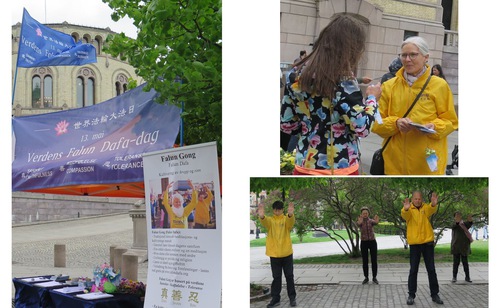 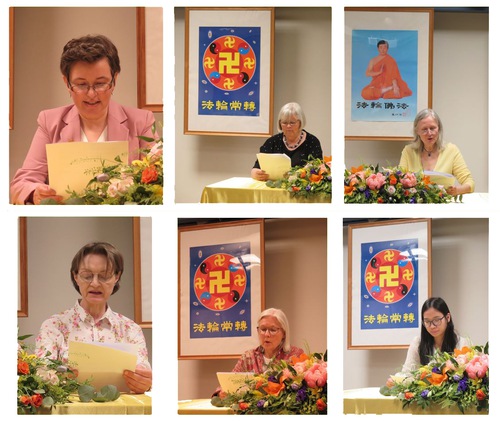 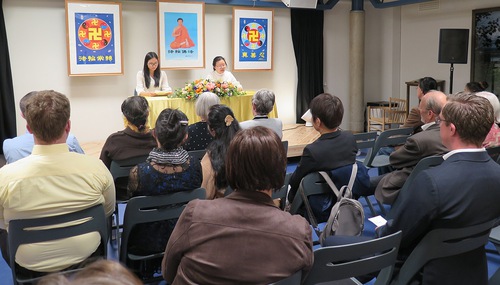 Attendees take a group photo during the second cultivation experience conference in Norway.

Terese started practicing over 20 years ago, when she was a university student. She is now a mother and works at Oslo University. She talked about how she discovered her deeply hidden jealousy. “I would get upset because I felt my husband didn’t do as much as I did at home. I thought this came from the principle of equality, but actually it was jealousy.”

She learned to regard family relationships from the perspective of cultivation, saying, “The phrase: ‘Everyone is equal’ comes from communist ideology and is incorrect. Everyone has different amounts of karma that needs to be paid back. I was angry because I thought I was being unjustly treated. This was in fact jealousy.”

Sissel is a retired teacher in her 70s. Many years ago, she read an article in a magazine about Falun Dafa, and decided to practice. Two years ago, she started to think about how she could balance family, cultivation, and telling people about the persecution of the practice in China.

Sissel lived on a property left by her great grandfather. It was passed down in the family for over a century with a big house and garden. She had many happy memories there. She chose to live there for more than 30 years due to the fruit trees, a garden with an abundance of sunlight, and soft grass. But it took a lot of work to take care of everything. She also has two children nearby and they need help in taking care of the grandchildren.

She asked Master for guidance, and an opportunity presented itself. She soon saw a new development near her house. She had a feeling that would be her new home. She made a major decision. She sold her property and bought a unit in the new development. It was a process of cultivation while waiting to move. During that time, Sissel went to every room and gave up many things she found hard to part with. When she got rid of two children’s chairs, she said, “I realized it was my attachment and sentiments that made me want to keep the chairs. It became much easier to get rid of these things. I also dealt with many items I was emotionally attached to this way.”

After moving into the new apartment, she said, “From the first moment, I felt as if I had returned home! I felt that Master had been looking after me all along. I passed several tests and now I completed the process of abandoning desires and many attachments. In my apartment are only things that I need. It feels great!” She now has more time to spend on cultivation and telling people how wonderful Dafa is. She is grateful to Master for arranging for her to become a Dafa disciple.

Henriette is a teacher and was a fan of Chinese medicine. During an acupuncture class she was introduced to Falun Dafa by the Chinese medicine physician and began practicing.

Henriette said that Master constantly took care of her and encouraged her. She spoke of an incident that took place in 2016. That year on May 24, she suddenly had a severe migraine. She recalled, “The pain was excruciating, I felt the sky spinning and wanted to give up. I felt I was only a few seconds away from death. Then I shouted Master’s name and he saved me! My symptoms were gone, and I knew I would survive.”

Afterward, she often felt Master’s help in cultivation and during truth clarification activities.

Margun learned about Falun Dafa at a health expo. She hoped to express her gratitude to Master through writing her cultivation experiences.

She talked about how she eliminated her attachments to being fastidious, and holding grudges. “If we can recognize our attachments and deny them, they will gradually disappear.” Therefore in her everyday life, she constantly examines her thoughts. If she notices that she criticizes others or has negative thoughts, she corrects them immediately.

Learning to Look at Others’ Positive Side

Annika’s husband told her about Dafa in the spring of 1999 and she began practicing. Months later, the Chinese Communist Party began to suppress the practice, but this did not stop her from practicing. She finally understood the purpose of life after practicing cultivation. She said, “It is the greatest gift in my life to be a Dafa disciple during Fa-rectification.” Her fear and anxiety vanished as well.

She learned to examine herself when she had conflicts with others. She observed that her daughter was following her impatient and quick-tempered ways when she taught her own children. She was ashamed of her past behavior. She sighed and said, “I did not have the guidance of Dafa at that time!”

She told her daughter about her insights, but her daughter did not think much of it and continued losing her temper with the grandchildren. Annika decided, “I must look at myself and not blame others. I discovered that I was often critical of my daughter in how she educated her children. I only looked at how she got upset and impatient with them—but the way she behaved was just like I treated her when she was young. I began to look at her strengths. I made an effort to change my opinion of her. Gradually, I noticed some changes in our relationship. We communicated more often and got along better.

Relationship with Mother-In-Law Improved Through Following the Principles of Truthfulness, Compassion, Forbearance

Thao is from Vietnam. She went through hardship and suffering in life at an early age and always wanted to practice cultivation.

She often went to temples while studying at the university. Nearly every day she read Buddhist scriptures hoping to find a way out but did not find any answers. She said perhaps the gods saw her wish. After moving to Norway, her cousin’s wife introduced her to Dafa and she found the answers to life she had been searching for.

After listening to the second lecture in Master’s recordings, she felt a Falun (law wheel) spinning at her forehead, palms, and legs. She gradually began practicing. When she conducted herself according to the requirements of the teachings, Master cleansed her body. Her arms used to hurt, and felt numb. Her constant headaches and backaches went away. Even her depressing thoughts vanished.

She said she felt her character improve after she guided her actions using the principles of Truthfulness, Compassion, Forbearance. She stopped resenting her mother-in-law and learned to be considerate. She could see her good side. Family conflicts became rare and she got along better with her mother-in-law.

Her husband, who is a doctor, saw her transformation. He noticed that she no longer got angry or complained. He no longer felt exhausted by family conflicts. Moved by her positive changes he decided to begin practicing.