(Minghui.org) Falun Gong practitioners set up a stand in Nuremberg, Germany on May 15, 2022, to promote the German version of the book, Minghui Report: The 20-Year-Persecution of Falun Gong in China (hereinafter referred to as the Minghui Report). They also collected signatures to raise awareness of the Chinese Communist Party’s (CCP) persecution of Falun Gong (also known as Falun Dafa) and the atrocity of organ harvesting.

The Nuremberg City Government held the biennial Nuremberg International Human Rights Award Ceremony. It held a traditional outdoor Peace Dinner (Friedenstafel) after the ceremony, hoping that more people would pay attention to peace, tolerance, and human rights. According to official information, about 4,000 people attended the Peace Dinner that day. Falun Dafa practitioners set up an information stand at the event.

People stop by the practitioners’ information stand and sign a petition to condemn the persecution.

Practitioners displayed the German version of the Minghui Report. This report systematically lists the CCP’s brutal persecution of Falun Gong practitioners in the past 20 years. It also talks about Falun Gong’s popularity outside of China and the efforts of practitioners outside China to expose the persecution. It is an important report and historical record.

Practitioners also told the public that the European Parliament passed a resolution on May 5, 2022, expressing their “serious concerns” over the ongoing, systematic, inhumane, and state-sanctioned harvesting of organs from Chinese dissidents, especially Falun Gong practitioners.

Most of the Peace Dinner participants were from different human rights organizations, churches, or international charitable organizations. They are concerned about human rights persecution happening around the world, of which the CCP’s persecution of the Chinese people stands out. This year’s winner of the Nuremberg International Human Rights Award is Sayragul Sauytbay, a Kazakh woman who experienced the CCP’s persecution firsthand and wrote a book about the concentration camps in Xinjiang, China.

Many people who passed by the practitioners’ stand said that they knew some things about the human rights situation in China. They were happy to sign the petition against the persecution which will be given to the German federal government. Many people thanked practitioners for their hard work and expressed interest in the Minghui Report. They took information about Falun Dafa.

One woman said that she knew the CCP harvests organs, so she signed the petition to support practitioners’ efforts.

Others never heard of the CCP’s crime of organ harvesting. After reading the information, a man learned that more and more young people are dying in prisons, while the elderly survived. In his opinion, this shows organ harvesting is being done.

Among the people who went to the stand, some participated in the award ceremony that morning. One man said he felt particularly empowered by the speech at the ceremony. He said, “People now understand that the CCP is not a normal political party. It is impossible to implement a policy of goodwill with the CCP. The regime has no tolerance for dissidents in China, whether they are other independent believers or dissidents.” 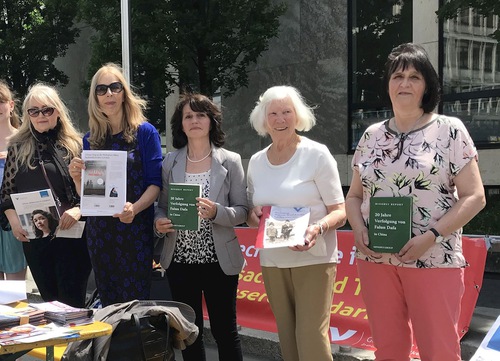 Alexandra Cavelius (third from left, in blue clothes), a German reporter who published a book together with awardee Sayragul Sauytbay, has a group photo with Falun Dafa practitioners.

German reporter Alexandra Cavelius who published a book together with awardee Sayragul Sauytbay to expose the Xinjiang concentration camps went to the practitioners’ stand and took a group photo with practitioners. 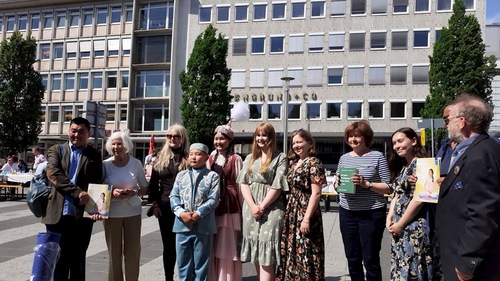 Towards the end of the event, Ms. Sauytbay’s family went to the practitioners’ stand to talk with them. Her husband signed the petition, and her family took a photo with them.

“Child of a Practitioner Experiences Miracles of Dafa”