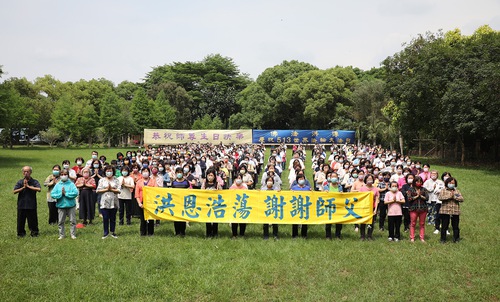 Dafa has been introduced to the world for 30 years. Around the world, there are a hundred million people practicing Falun Dafa in more than a hundred countries and regions and these practitioners are all holding events to celebrate the introduction of Falun Dafa to the world for the 30th year. Falun Dafa practitioners in Central Taiwan gathered at the Yunlin Gukeng Riverside Park on May 7, 2022, to hold a one-day Fa study session. Through Fa study and cultivation experience sharing, the practitioners remind one another to cultivate in a more diligent manner and save more sentient beings so as to repay their gratitude to Master. 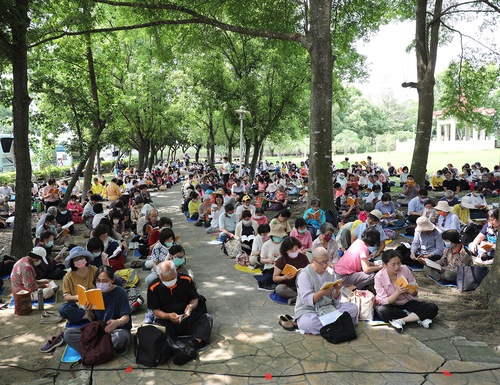 Xiu Ying, who came from Changhu, is a retired school principal. After retiring, she took over the role of chairman of a medical beauty company. The company was originally not in a good shape and many problems regarding human resource matters and other things existed. Xiu Ying suffered a lot of stress and challenges due to it but with her many years of experience running a school as the principal and also based on the guidance of Falun Dafa, she gradually improved the many negative situations of the company. All the company shareholders and employees saw what she did and were all full of respect for her in their hearts. Everyone tried their best together and the company turned from making losses to making profits, establishing a good reputation through word of mouth. 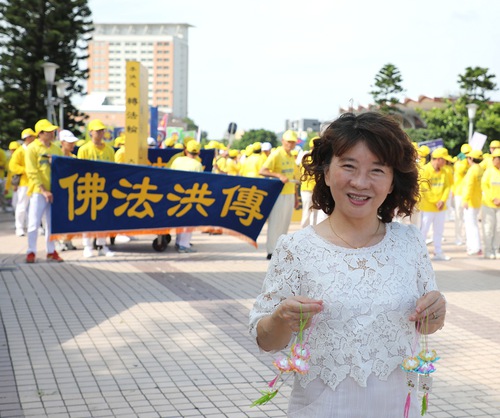 In order to promote Shen Yun, Xiu Ying changed her shy character and civil servant habit of not liking to interact with others. She shared that this was a miraculous experience. More than a month ago, she participated in a social activity. When the dinner was about to end, Xiu Ying voluntarily went to make friends with the restaurant’s boss, director Lai and introduced the Shen Yun performance to him. However, director Lai immediately called director Wang, who is still in the Changhua Douliu company. The phone call made director Wang rush over immediately. Seeing Xiu Ying, his first sentence was, “I have waited for you for a long time! You finally appeared.”

Due to the pandemic, director Lai’s restaurant business was seriously affected. Director Wang wanted to help director Lai improve his restaurant business but no matter how he tried, he could not find a way. One day, a scene of the Shen Yun performance that he had watched in the past appeared in his mind. When the curtains opened, the creator brought with him the gods to descend from the Heavens. He understood that for the restaurant to survive, he could only depend on Shen Yun. Since then, they had been waiting for the arrival of Shen Yun. Director Wang not only bought tickets to watch Shen Yun for his entire family, he also voluntarily agreed to help promote Shen Yun too.

This process touched Xiu Ying very much. She said, “Everything is under Master Li’s (Dafa’s founder) arrangement and Master is watching over his disciples. I have endless gratitude to Master and Dafa.”

Striving to Be More Diligent Based on the Fa

Wen Lian, who came from Nantou, is currently the business director of a television media company. With the purest heart, she expressed her highest level of respect to Master. She put her palms together and said with sincerity, “May 13 is the birthday of our greatest benevolent Master. Here, with the highest level of respect, I wish my great Master a happy birthday!” 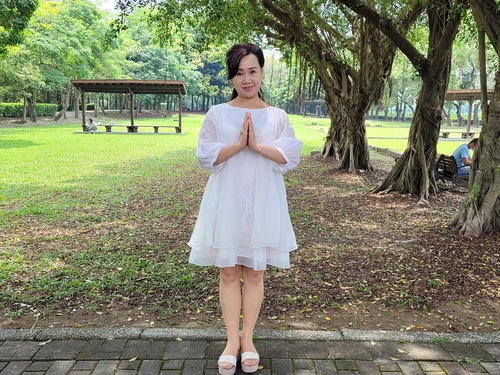 Picture 4: Wen Lian thanked Master in gratitude for his salvation and strived to be more diligent.

Before cultivating in Dafa, Wen Lian was a hot figure that is popular among political and business celebrities. Since she was young, her results are always a mark above the rest. Her career is smooth sailing and she is often complimented.

After cultivating in Dafa, Wen Lian understood from the Fa, “Actually we created a lot of karma throughout our many lifetimes. Through cultivation, we repay all this karma. Therefore, at this time, there will be no unbalanced feelings and also no bearing of grudges.” She said, “After cultivating, I can truly feel that when a living being has no desires, but truly and sincerely sacrifices for others, that will not only touch himself but those entrepreneurs and bosses are also very courteous towards him.”

She continued to say, “I feel very curious, I feel that I don’t seem to be so outstanding, however, these big bosses are so affirmative towards us. They all say, ‘It is because we see in you all the kindness that we have not seen for so many years.’”

She said, “This came from Master’s teachings because Master told us that we must put others before ourselves and we must be very compassionate and kind in treating people, matters and things that we face. I am just practicing the teachings. This should be the greatest difference before and after my cultivation.”

“The more I learn this Fa, the more I find it precious,” said Xu Xiaomin (nickname), the operator of an overall aesthetics business. Xiaomin has already been cultivating for 11 years. To date, she will still be moved to tears by the Fa’s principles in the Falun Dafa books. She thinks that the Fa principles in the books are “such a high-level wisdom and so selfless”, such that the more she studied them, the more she understood and the more she found them precious. Emotionally, she said, “This is my true home to return to in my life”. Through her sharing, her whole family also started to learn and practice very quickly.

Xiaomin described that the first time when she read Zhuan Falun she kept feeling shocked from start to end. The philosophies that the book has mentioned are “very righteous, very selfless”. She felt that this is how a human should live, this is cultivation. Having undertaken important roles in another religion for many years, Xiaomin received stress, hardship, and loss of happiness in her heart in return. It was only until she met Falun Dafa that her inner heart knew for sure that this is what she really wanted. She discovered that her inner heart became very stable and peaceful. At the same time, her thoughts became clear and she now has her own opinions. She thus became more relaxed.

Through practicing the Fa principles of Truthfulness, Compassion and Forbearance, Xiaomin’s speech and behavior are also changing. She cited an example that in the past when she lead her employee, she would solemnly point out their problems and request them to correct it. Now, she will consider them and resolve the conflict in a harmonious way. “I often remind myself that I am a Dafa practitioner so I must treat others with a benevolent and peaceful attitude.”

Thank you Master for Introducing Dafa to the World

“Thank you Master for letting us obtain this universal Dafa!” A retired school principal in Yunlin, Xu Qingxun, put his palms together and wished Master a happy birthday. 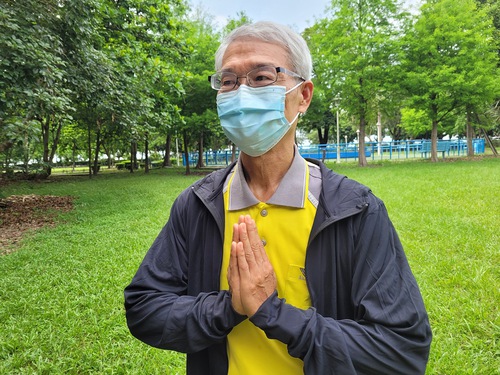 Xu is grateful to Master for introducing Dafa to the world and he is honored to be able to send his birthday greetings to Master together with the whole world’s Dafa practitioners. He said, “Over a hundred million people in over a hundred countries and regions worldwide cultivate the universal Dafa which is hard to attain in thousands of years. May 13 is a very precious day that deserves our remembrance. Only when there is Master will we have to chance to obtain a new lease on life. We will not forget this.”

He shared that through his cultivation for these 23 years, under the guidance of the principles of Truthfulness, Compassion and Forbearance of the universal Dafa, there is a totally different type of joy in his life in terms of his work, his family, and his interpersonal relationships and interactions with others. He said, “Dafa gave me a new lease of life. My body also became more healthy, and my family became more harmonious. My job became more enjoyable. I am really blessed!”

Qian Ting, an Interior Designer from Taichung Thanked Master for Introducing Dafa to the World 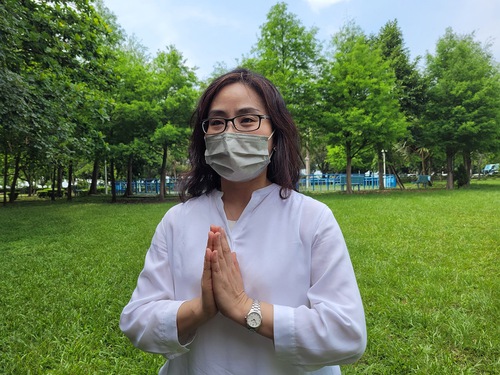 She shared that the greatest difference in her before and after cultivation is that, “In the past, I was a person who tends to feel more superior than others and I spoke in a very straightforward manner. I am proud and placed myself high above others. I am also very self-centered. After cultivating I followed Master’s guidance to think of others first when I do things, put others before myself and become a better person. To me, that means to think of others in every matter and change from being self-centered to becoming more understanding of others. Due to the changes in myself, the environment in my family life and surroundings all changed for the better. This is the greatest reward that I gained.”

“Ireland: Elected Officials Offer Congratulations on the 30th Anniversary of Falun Dafa’s Introduction to the World”

“Some Personal Understanding of Police Harassment”