(Minghui.org) Today's news from China includes incidents of persecution that took place in 14 cities or counties in 9 provinces, where at least 27 practitioners were recently persecuted for their belief. 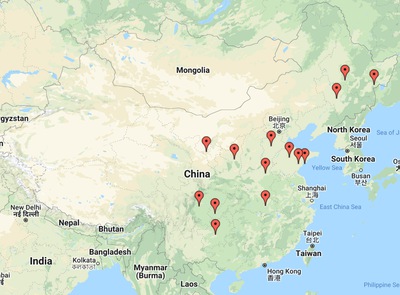 Ms. Zhao Youqin of Jiaozhou City was sentenced to three and a half years in prison by the Huangdao Court on April 24, 2022. She plans to appeal.

Mr. You Haijun of Zhongning County will be tried by the Shapotou District Court on May 24, 2022.

Ms. Sun Peiying, Ms. Chen Xiulan, Ms. Ma Shuyan, Ms. Liu Zhaoqing, and Ms. Chi Guilan were arrested in 2021 and released on bail. They received calls from the procuratorate on April 27, 2022. Their cases were submitted to the procuratorate. They were told to stay in the city and prosecutors would talk to them.

Ms. Zhi Yeqing was photographed when she was posting Falun Gong flyers. She was arrested, but released on bail because of her high blood pressure. Her case was submitted to the Shibei Court.

Ms. Li Xianbi and Ms. Zhang Defen were harassed by officers from the Jinyang Police Station. Their homes were ransacked.

Ms. Jin Xiuli of Donghai Town was arrested by officers from the Donghai Town Police Station after 9:00 p.m. on April 23, 2022, after someone reported her for practicing Falun Gong. Her home was ransacked.

Ms. Cui Hongxiu of the First Group, Donghai Town, was arrested after 10:00 a.m. on April 24, 2022. Her home was ransacked. In the Donghai Police Station, officers from the Jidong Domestic Security Division and agents from the 610 Office interrogated her every day between 8:00 a.m. and 10:00 a.m. They tortured her during the interrogation. As a result of the torture, she can no longer walk.

Ms. Zhou Min and her husband, Mr. Chen Xianmin, were missing in mid-April 2022. It was learned that another practitioner, Ms. Ma Hong, was held in a detention center. It was discovered at the end of April that the three practitioners were arrested on the same day.

The three practitioners are being held in the Sanjiang Detention Center.

From March 1, to April 29, 2022, Mr. Meng Xiangbiao and his family were repeatedly harassed at home by agents from the Lankao County Political and Legal Affairs Committee, as well as officers from the Tongxiang Police Station. The agents and officers threatened the couple and said if they did not sign documents to renounce Falun Gong, their children would be deprived of the right to an education, and would never be government officials. Mr. Meng refused to sign.

Mr. Wang Detong, 76, a retiree, was missing two months ago. It was learned that he was arrested. But, when, why, and by whom he was arrested, as well as where he is, are all unknown.

In November 2021, officers from Leshan Police Station ransacked Mr. Zhang Hailong’s home and seized a picture of the founder of Falun Gong. The home of Wang Yuhua was ransacked and all his Falun Gong books were confiscated. Wang (gender unknown) was detained.

Ms. Ma Guixin’s home was ransacked on March 20, 2022. Her Falun Gong books, a photo of Falun Gong’s founder, a Falun emblem, and other items were confiscated.

Ms. Ma Tongxin, 78, lives in Zhaoba Village. Seven or eight officers from the Chengqu Police Department jumped over her fence and entered her home at 12:00 a.m. on January 10, 2022. They arrested her and tried to take her away. She resisted. Four officers carried her out. She was held in the Jinzhou Hotel for 14 days, then transferred to the Shijiazhuang No. 2 Detention Center. She has been detained for more than three and a half months.

Ms. Wang Guilan, 74, Mr. Ma Shuguang, 77, were among the approximately 10 practitioners who were arrested in November 2020 after their phones were monitored for a long time. Many of them were released on bail.

Ms. Wang and Mr. Ma were tried by the Zichuan District Court on February 16, 2022. The court did not pronounce a judgment. But the two practitioners were told in advance by prosecutors that the sentence would be three years of probation.

On April 8, 2022, Ms. Wang received the verdict of three years’ probation. She was given three months strict management, must report weekly to the town Judicial Office, and turn in a written report with the village director’s signature. She was also subjected to irregular public services and stay-at-home restriction. Officers from her local police station photographed her and took her fingerprints.

Ms. Niu Xiaona was arrested by Domestic Security officers and has been held in a detention center for three months.

Mr. Kang Hong of the Yuzhong District was arrested by unidentified officers around 8:00 a.m. on April 25, 2022. His whereabouts are unknown.

Ms. Su Xiake of Wuchang District has been repeatedly persecuted in recent years.

Officers interrogated her and collected her personal data. She was released on bail. Her case was submitted to the Hongshan District Procuratorate.

On March 9, 2022, she was called to the procuratorate for questioning, and threatened with being sentenced.

In November 2019, she distributed Falun Gong flyers. Yangyuan Police Station officers said they saw this through the surveillance system. Officers from the police station and the Wuchang District Domestic Security Division arrested her on December 30. She was detained for 15 days in the Wuhan City No. 1 Detention Center.