(Minghui.org) Falun Gong practitioners in Philadelphia gathered in Chinatown on April 24 to commemorate the April 25 Peaceful Appeal that took place in Beijing 23 years ago. With banners and speeches, they told passersby about the ongoing persecution in China and to help end it as soon as possible. 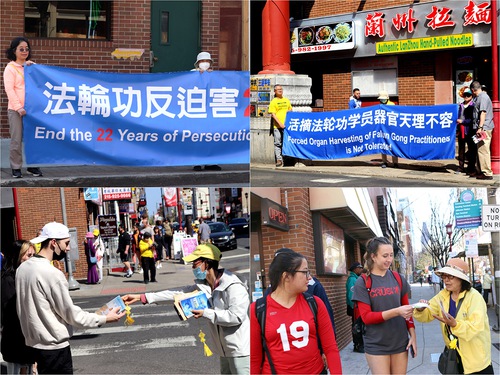 Rally at Philadelphia Chinatown on April 24, 2022, calling to stop the suppression of Falun Gong in China

Impressed by the scene, many pedestrians stopped to read materials, talked with practitioners, and signed the petition to end the persecution. Upon hearing how the Chinese Communist Party (CCP) harmed many innocent citizens in previous political campaigns, 14 Chinese people agreed to quit the CCP organizations.

“Falun Gong is very profound and it helps many practitioners like me both physically and mentally,” said Mr. Kui Huang, a former Ph.D. student at renowned Tsinghua University.

Upon hearing dozens of practitioners had been arrested in the nearby city of Tianjin on April 23, 1999, Mr. Huang and other practitioners that he knew decided to appeal in Beijing. “We arrived at the State Council Appeals Office located near Zhongnanhai on April 25, 1999,” he recalled, “There were practitioners on both Wenjin Street and Fuyou Street. But we did not block the traffic or the bike lane.”

The practitioners were very quiet and peaceful. “We had no banners and did not call out any slogans, just waiting to deliver our messages to the Appeals Office,” he said. After hearing Tianjin authorities agreeing to release the arrested practitioners at 8 or 9 p.m. that night, the practitioners left. 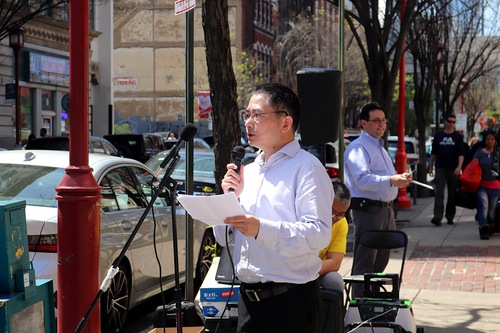 Mr. Kui Huang talked about the peaceful appeal in Beijing in April 25, 1999.

But the CCP still launched a nationwide campaign against Falun Gong three months later. Mr. Huang was also forced to stop his education, as he was arrested and detained for about five years. “In the past 23 years, Falun Gong practitioners have suffered tremendously for their belief,” he continued, “But instead of submitting to the persecution as the CCP had hoped for, the practice and the principles of Truthfulness-Compassion-Forbearance have won the heart of more and more people and is being practiced in over 100 countries.”

Ms. Gong Qinhua, a Chinese medicine doctor, also joined the peaceful appeal in 1999. After hearing about the arrest in Tianjin from her mother, she and her mother decided to appeal for Falun Gong.

“It was still early when we got there and the Appeals Office was not open yet. We also saw some other people walking toward the Appeals Office and later we found out that they were also practitioners,” Dr. Gong said. In the beginning, the police did not allow them to stop and kept them walking. “Later on, police officers led us to walk in a certain direction and other practitioners followed. In the end, we ended up on Fuyou Street, right outside of the west entrance of Zhongnanhai.” 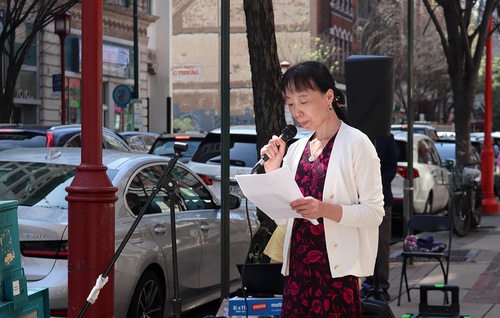 It was a beautiful day. Usually, it was a little cold in April in Beijing, but it was warm and sunny that day. “About 10,000 practitioners stood there but were all quiet. Anyone who was tired of standing would go back and sit down for a break,” she said. Practitioners were of all different ages: some mothers had young babies, some were students, some were middle-aged, and some were elderly.

“We had the same belief of Truthfulness-Compassion-Forbearance, so the scene was very peaceful and police officers on site hardly had anything to do,” Dr. Gong added, “After hearing that evening that practitioners in Tianjin had been released, we all left quietly and resumed our normal routines the following day – some going back to school and some going back to work.”

Since the CCP took power in 1949, it successfully silenced intellectuals and wiped out traditional Chinese culture through numerous political campaigns such as the Cultural Revolution. After the Tiananmen Square Massacre in 1989, few Chinese people dared to have their own dreams other than blindly following the CCP’s Party line. “On the surface, Falun Gong practitioners were appealing for their own rights – belief in being good, in reality, they were seeking the basic freedom of belief for every Chinese citizen,” Dr. Gong said.

The CCP targeted Falun Gong and the practice’s principles of Truthfulness-Compassion-Forbearance which is a sharp contrast to the CCP’s evil nature of the class struggle, hatred, and lies. “During the past 23 years, Falun Gong practitioners have suffered tremendously and worked tirelessly to expose the brutality,” Dr. Gong said, “Please do not turn down a flyer from Falun Gong practitioners because they are not doing it for themselves – they are helping everyone to stay away from the CCP for a better future.”

Thirteen Arrests Made Against One Family

Mr. Liu Lecun came to the U.S. from China four months ago. Several members of his family had been repeatedly persecuted for their belief in Falun Gong over the years. 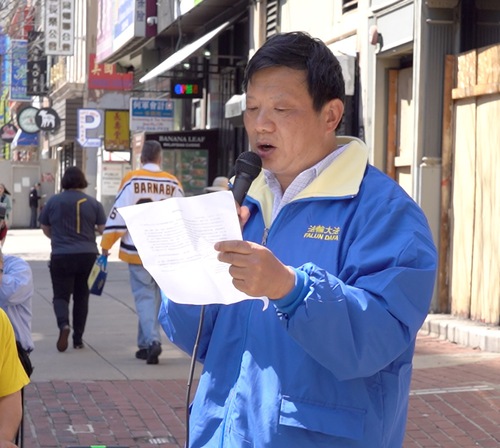 While the family was not in custody, there were frequent home ransacking and harassment from police. In fact, on the third day after Mr. Liu fled China, local police were planning to arrest him again while detaining his mother.

What his family experienced was only one of the countless examples practitioners have suffered in China for their beliefs. Besides detention and torture, some practitioners were also subjected to psychiatric abuse. “We hope more people will hear about this and help end the tragedies,” Mr. Liu remarked.

Commitment to Being Good 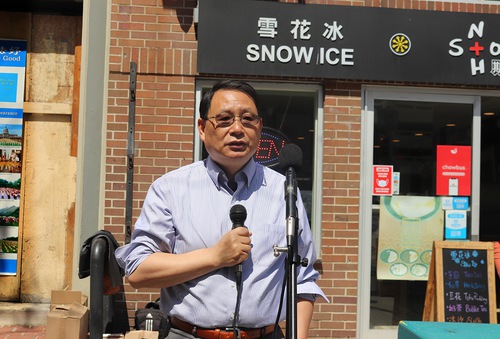 The peaceful appeal in April 1999 was a testimony of Falun Gong practitioners’ commitment to their belief in Truthfulness-Compassion-Forbearance, said Jingduan Yang, doctor, and Chair of Philadelphia Falun Dafa Association.

“They knew there would be risks, but they chose to step forward and tell the government the real story. Because of their faith and perseverance in truth, they put aside their fear along with material interest and continued,” Dr. Yang explained, “Practitioners went to the appeals office voluntarily and peacefully, and left quietly with no trash left. All this showed that they cherished the principles of Truthfulness-Compassion-Forbearance and acted according to them. Unfortunately, the totalitarian CCP regime could not tolerate it and decided to persecute these innocent people.”

Dr. Yang also hoped people could open their minds and not turn down Falun Gong materials. “Inside China, a single copy of Dafa materials or a single phone call could put a practitioner’s life in danger. But they still continue to raise awareness of the persecution because they know our society needs good people,” he added. 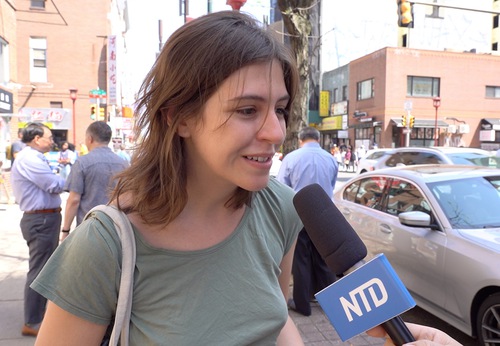 Hannah Kolzer, a student from Haverford College, said she had seen Falun Gong practitioners’ activity earlier that day at the Independence Hall park, “The CCP’s persecution of Falun Gong, especially forced organ harvesting, is a severe violation of human rights,” she said, “communism has caused lots of harm and the ideology is terrible.” 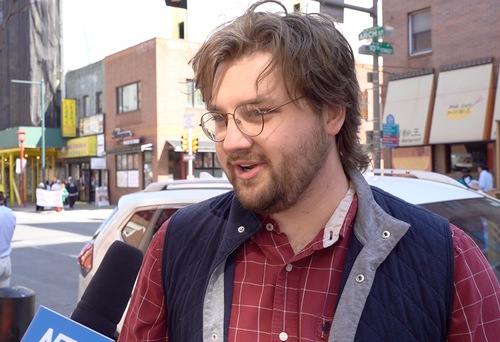 Another passerby was Maines Jonathan from La Salle University and he signed a petition to help stop the persecution. “I know the CCP well and the crime of forced organ harvesting is absolutely unacceptable – at any place and at any time, especially in our society,” he said. 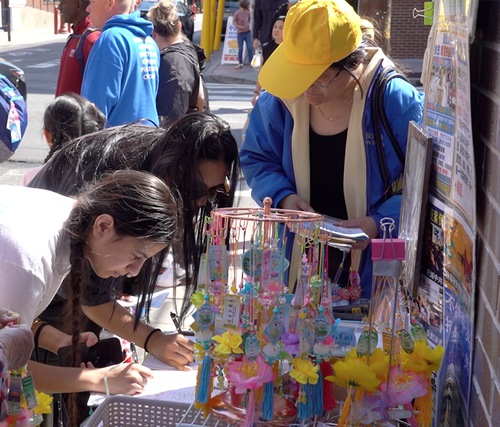