(Minghui.org) Today's news from China includes incidents of persecution that took place in 7 cities or counties in 3 provinces, where at least 10 practitioners were recently persecuted for their belief. 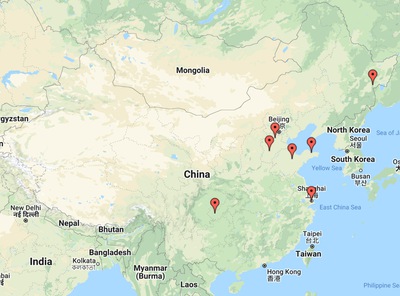 Ms. Pan Xihua and her husband Mr. Chen Weiquan from Didao District were arrested on September 15, 2021, by police officers, including Jin Hui from the Didao District Domestic Security Division. The couple has been held in the Jixi City Detention Center.

It was reported that the couple will be tried by the Mashan District Court on April 7, 2022.

A villager, whose nickname is Lao Heidan, led officers from the Gucheng Township Police Station and SWAT police from the Domestic Security Division to the home of Ms. Shen Ying’s parents in Sanjie Village. They twice climbed over the wall to break in when no one was at home. They took more than 50,000 yuan in cash and some gold and silver jewelry. The officers also confiscated several Falun Gong books and a seal from Mr. Xu Qinghai’s home.

Mr. Xu Qinghai, Ms. Xu Wenting, and Ms. Shen Ying are being held in a “transformation” class in Xiao Village.

Li Jiansu (gender unknown) is from Nan’an District. The police located, monitored, and followed Li by tracking down Li’s cell phone signals. Li was heading back to Chongqing from Chengdu on March 20, 2022. At the Chengdu East Railway Station, the railway police searched Li and found amulets and 2 USB flash drives.

After Li returned to Chongqing, on March 21, Zhong Mingxing among other officers from the Huayuan Road Police Station in Nan’an District, and community management office personnel ransacked Li’s home without showing a search warrant. Li is currently under residential surveillance.

Ms. Guo Lixin was arrested at home by five or six officers from the Jinling Town Police Station on April 1, 2022. The officers ransacked her home and confiscated photos of the founder of Falun Gong, Falun Gong books, printed materials, and a cell phone.

The officers called Ms. Guo’s family around 4 p.m. to demand payment of 2,000 yuan before releasing her. Ms. Guo has returned home. Her cell phone and other personal items were confiscated.

In early January 2022, officers from the Yingpu Police Station resorted to deception and collected information on Ms. Li, videotaped her, and entered her name into the records of “Critical Persons” in Shanghai’s Public Security system.

Ms. Li Dandan from Shang Village was videotaped by surveillance cameras when she was distributing Falun Gong materials on the evening of March 28, 2022. Officers from the Gaobeidian Police Station broke into Ms. Li’s home and arrested her that evening. Two days later, she was transferred to the Chaoyang Police Department.