(Minghui.org) Cartagena is a beautiful, historic city in Spain, located on the Mediterranean coast and a popular tourist destination.

Spanish Falun Dafa practitioners held their first event in this scenic city on October 22, 2022. They introduced and clarified the truth about the ancient cultivation practice.

Practitioners demonstrated the Dafa exercises at the Plaza del Ayuntamiento on the morning of October 22. Some tourists were drawn by the exercise demonstration and learned the exercises on the spot.

Then, the practitioners set up an exhibition table at the Town Hall Square in the afternoon. They collected signatures for the petition calling for an end to the organ harvesting from living practitioners by the Chinese Communist Party (CCP). Many people signed their signatures to show their support. 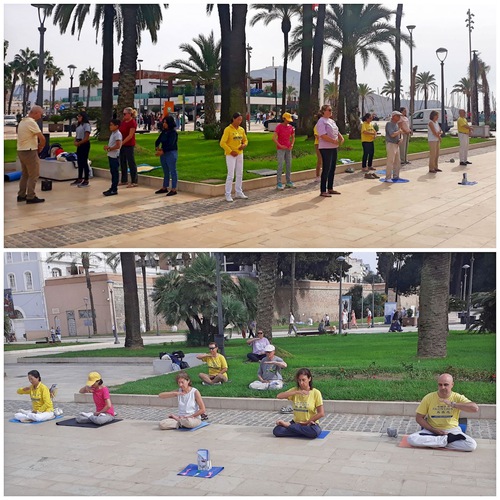 Some tourists were drawn by the demonstration and started learning the exercises on the spot. 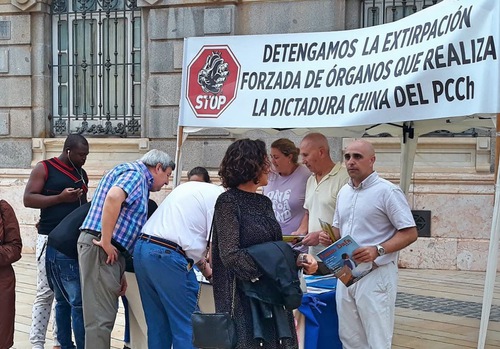 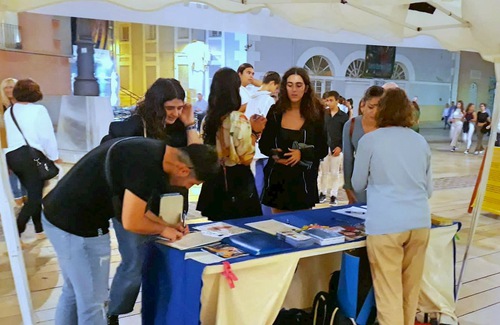 The practitioners set up an exhibition table at the Town Hall Square in the afternoon. They asked for signatures for the petition to end the organ harvesting from living practitioners by the CCP.

Then, practitioners set up a table at the Town Hall Square in the afternoon. They asked people to sign a petition after clarifying the truth.

When Ms. Pera and her daughter passed by the exhibition table, she stopped to read one of the posters exposing the CCP’s persecution of Falun Gong. She was angry after hearing about the persecution that Falun Gong is experiencing.

Sofia and Hadia are two high school students. After learning about the CCP’s persecution of Falun Gong practitioners in China, they helped to distribute truth-clarifying fliers to passersby and encouraged them to sign the petition. Before leaving, they asked for truth-clarifying informational materials. They explained that they would give the materials to their high school teacher, They also thought of asking their teachers for permission to detail the persecution of Falun Gong in a report. They suggested a class assignment on the topic and also expressed their interest in learning the exercises.