(Minghui.org) Today's news from China includes incidents of persecution that took place in 14 cities or counties in 7 provinces, where at least 38 practitioners were recently persecuted for their belief. 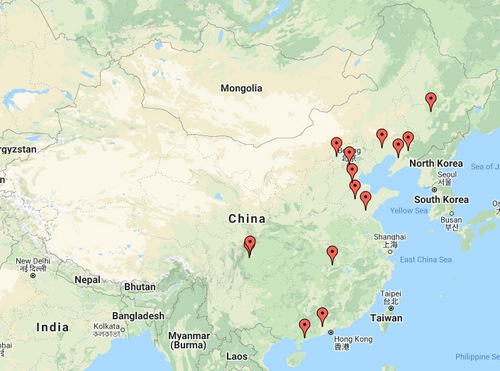 Ms. Xu Lihua, 73, of Yushu City was arrested by Huachang Police Station officers in March 2020 for posting Falun Gong flyers. She was released on bail. Her case was submitted to the Dehui City Procuratorate.

She was sentenced to three years in prison by the Dehui City Court in October 2021. She is being held in the Jilin Province Women’s Prison.

She was imprisoned before. She was sentenced to three years in prison on May 3, 2011, and was incarcerated for three years in the Jilin Province Women’s Prison.

Eleven practitioners, including artist Ms. Xu Na, were sentenced for sending online media pictures that revealed the situation in Beijing during the pandemic.

Ms. Zhu Tairong was called to the Hexi District Police Station on December 29, 2021, for posting Falun Gong flyers. The officers recorded and videotaped her and ordered her to sign paperwork and fingerprint it.

The officers threatened her son the next day, “Your mother’s children and grandchildren will suffer because she practices Falun Gong. Your son is not allowed to join the army, go to college, or find a job.” They ordered him to sign a paper.

Mr. Ji Yongqing, in his 70s, was arrested by officers from the Shiqiao Police Station and the Qinghua Police Station for talking to people about the persecution of Falun Gong in the summer of 2020. He was released on bail for medical reasons. His case was submitted to the Yingkou City Zhanqian District Court. A lawyer was hired to defend him on January 5, 2022.

Mr. Hou was taken to the Changzhou City Detention Center by Gao Fusong, head of the Xinhua Police Department Domestic Security Division, on the afternoon of January 16, 2022.

Ms. Liu Zaiyun and Ms. Hu Xiumei were admitted to the Cangzhou City Detention Center by Gao Fusong on the afternoon of January 18, 2022. Their families never received any official notification.

Ms. Liang Yixia of Xiqiao Town was arrested by officers from the local police station on the morning of January 19, 2022, when she was distributing Falun Gong flyers.

Mr. Shi Li was arrested by Xiangyang Police Department officers on the morning of January 7, 2022. His home was ransacked. He has been detained since then.

The wife of Mr. Tian Guoyou was released on bail by the Xiangyang Police Department. After her one-year term is finished, the officers plan to submit her case to the Longcheng Procuratorate.

Ms. Sun Limin, Mr. Tian’s daughter-in-law, was called to the Xiangyang Police Department on January 18, 2022. The officers gave her five days detention for no reason even though she has two young children. The detention center did not admit her because of her health. The officers then forced her to have a second physical exam.

Mr. Chen Zhihong of Dayi County was sentenced to eight months in prison on December 29, 2021.

Mr. Feng Shanghao of Andi Town was arrested by officers from the local police station on the morning of January 18, 2022. They ransacked his home and took a desk calendar. They videotaped him, took his fingerprints against his will, and subjected him to a physical exam. He was released that afternoon.

Ms. Song Yuanhui of Longfeng Town was forcibly taken to the brigade office on December 22, 2021. They collected her fingerprints.

It has been 42 days since Mr. Li Hongjun, his wife Ms. Ren Guifen, his wife’s elder sister Ms. Ren Guie, and his wife’s younger sister were arrested on December 8, 2021. Mr. Li and his wife, as well as the elder sister, were recently formally arrested by the Nanfen District Procuratorate. The younger sister was released on bail. Their family members were threatened by officers from the Benxi City Domestic Security Division, and they did not dare to talk to any local practitioners.

Ms. Ren Guie was tricked into going to the Wolong Police Station on December 8, 2021, and was arrested. Several officers went to her home after 8:30 p.m. and told her that everyone in the village was taking nucleic acid testing. They ransacked her home and seized her Falun Gong books, hundreds of keepsakes, printers, and other items. Her husband was harassed. He was called twice to the police station for inquiries.

The family of Ms. Jia Fengzhi received an unexpected call from the prison where Ms. Jia is being held on January 17, 2022. The guard said they would give Ms. Jia an injection for her low platelet count. The family said not to. The guard asked if they meant to give up any medical treatment. They said they had never thought about giving up medical treatment and were only questioning if this treatment was effective.

Ms. Jia was sentenced to three and a half years in prison for handing out free Falun Gong calendars. She was transferred to the Tiantanghe Women’s Prison around November 18, 2021, after she was held for over two years in the Pinggu Detention Center.

She developed severe stomach problems and rheumatoid arthritis in prison. Her platelet count was as low as 20. She was admitted to the Chaoyang Emergency Center ICU. She was taken back to the Daxing Women’s Prison on December 17, 2021. It was said that she did not cooperate with the treatment.

Ms. Deng Yuli was arrested on April 23, 2020, for distributing informational materials about Falun Gong. Although she was later released on bail, she was taken back into custody on December 29, 2020, and sentenced to four years a year later. She has been admitted to the Jilin Province Women's Prison.

Prior to her latest incarceration, she was arrested on December 31, 2017, after being reported for talking to people about Falun Gong. After five days in the Yushu City Lockup, she was put in criminal detention on January 5, 2018. The police first transferred her to the Yushu City Detention Center and then to the Changchun City No.4 Detention Center. She was released in February 2018.

“Seizing This Precious and Rare Opportunity”