(Minghui.org) The suppression of Falun Gong in China remains unabated since the Chinese Communist Party (CCP) launched a nationwide campaign against this peaceful mind-body practice in July 1999. It was confirmed in 2021 that 132 Falun Gong practitioners lost their lives to the persecution that year, 1,187 practitioners (the oldest being 88) were sentenced to prison, and 16,413 practitioners were arrested and harassed for their faith.

Yet the persecution harms more than those whom it targets specifically. Many people, both regular citizens and CCP agents who were involved in persecuting innocent practitioners for their faith in Truthfulness-Compassion-Forbearance, have met with consequences over the years, including 553 reported by Minghui.org in 2021.

Among the 553 people, 384 faced consequences in 2021 and 169 in previous years. Thirty percent (166 out of 553) of these people worked in the police system (including detention centers), 117 (21%) concerned agents of the Political and Legal Affairs Committee (PLAC) or the 610 Office, and the rest worked in the judicial system (procuratorates and courts), government agencies, state-owned enterprises and institutions. 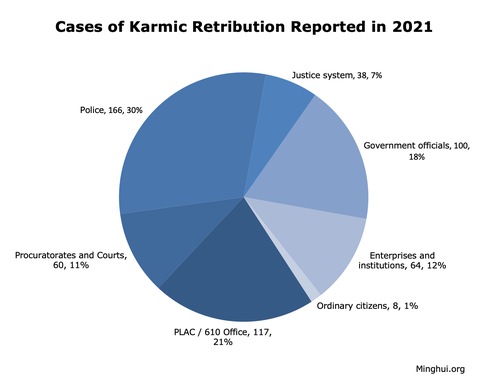 In both Western and Chinese culture, the principle of karmic retribution, that is, being held ultimately accountable for one's own actions, is widely accepted. The fundamental teaching of Falun Gong is Truthfulness-Compassion-Forbearance. The universe will reward acts that are in harmony with these principles, while beating, torturing, and killing people will incur karmic retribution. Stated another way, good deeds will be rewarded with good, while doing evil will meet due retribution. Articles such as this are meant as a compassionate reminder of this principle to those who would commit wrongdoing.

The Chain of Command

Under the command of the PLAC and the 610 Office, the two agencies specifically tasked with overseeing the persecution of Falun Gong, government officials at different levels are mobilized to carry out and enforce the eradication policy against Falun Gong practitioners.

Finally, the general public is also involved in the persecution. Managers of state-owned enterprises are charged with monitoring and turning in practitioners within their organizations, as well as providing financial assistance to brainwashing centers and other illegal detention facilities. Even average citizens are compelled to report practitioners, who are then arrested and tortured.

Some of the officials have participated in the persecution for a long time. Zhao Nan, former Yi County Party Secretary (1999 – 2002) in Liaoning Province, actively followed the persecution policy. In addition to making plans to persecute practitioners, he often said in various meetings, “Let’s send them all to prison!” During those three and a half years of his tenure, at least 72 practitioners were sent to labor camps for their faith and 254 were arrested. Among them, Mr. Xiao Peng died at age 30.

Zhao was later reported to the authorities for corruption. He was removed from office and sentenced to 6 years in prison. After suffering from diabetes and a stroke, he committed suicide by jumping from a 20-floor apartment building on June 11, 2021.

The 553 people who were reported in 2021 to have received karmic retribution came from 31 provinces and province-level cities. Heilongjiang Province had the highest number with 91, followed by Hebei Province with 85. The officials among them came from different ranks, including those at the provincial level (head of provinces or equivalent), bureau level (between provincial and county levels), county level, and township level. Ordinary civilians also faced consequences for reporting on practitioners. 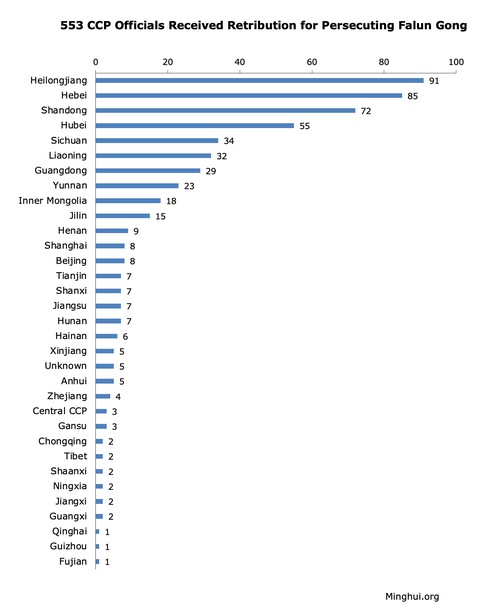 Below is the breakdown of retribution cases, organized by agency or other entity involved in the persecution. A detailed name list can be downloaded here.

There were 86 officials in the CCP’s PLAC reported to have received retribution, including:

One example is Li Li, Party Secretary and PLAC Party Secretary of 8511 Farm (also known as Mishan City Agricultural Reclamation Branch) between 1999 and December 2003. Over 10 practitioners within his jurisdiction were arrested during his tenure for practicing Falun Gong, resulting in detention, torture, imprisonment, and broken families.

Later on, Li was diagnosed with a brain tumor. Although he went to Beijing for treatment, the tumor recurred, requiring him to have another surgery. He remained in a coma after the surgery and died in October 2020.

There were 31 610 Office agents who met with consequences in 2021 for persecuting Falun Gong practitioners, including the following:

Hebei Province was one of the places where Falun Gong was heavily suppressed. For example, Mr. Chen Yunchuan from Huailai County had 6 people in his family practicing Falun Gong. His first son died of torture in detention at age 33 in 2001, his daughter Ms. Chen Hongping lost her life at 32 in 2003 due to brutality at the Gaoyang Labor Camp, and another son, Mr. Chen Aili died at 35 in 2004. In the end, Mr. Chen and his wife were forced to live away from home to avoid arrest and eventually lost their lives, one in 2006 and another in 2009.

The news came in July 2021 that Ma was suspected of having violated the law and was under investigation.

The number of agents who received retribution in police departments, police stations, and detention centers totaled 166, including:

Zhao Mingzhi, 56, became the Sanhe City Deputy Police Chief in March 2005, and served as Yanjiao Police Department Chief between July 2010 and November 2015. During that time, at least 11 Falun Gong practitioners were tortured to death, 58 lost their lives as a result of torture, three were disabled by torture, 15 were sentenced to prison, 29 were sent to labor camps, and 108 were held at the Langfang Brainwashing Center.

After receiving a warning in November 2015, Zhao was removed from office. He was convicted of protecting organized crime, and was sentenced to six and a half years in February 2021.

Wang Li, Chief Prosecutor at the Lulong County Procuratorate in Hebei Province, died in May 2021 at 45. It took only about a year from her initial cancer diagnosis to her death. Many people linked her death to her mistreatment of innocent Falun Gong practitioners.

Over the years, the Lulong County Procuratorate has been actively implementing the persecution policy against Falun Gong. After becoming a chief prosecutor in 2016, Wang charged quite a few practitioners and sent them to prison. These included medical expert Li Yanchuan, Pei Yuxian, and more.

There were 40 officials who met with consequences after their involvement in the persecution, including:

Chu Luning, Vice President of the Qingdao City Intermediate Court in Shandong Province, was investigated on June 24, 2021, for illegal activities. He committed suicide the following day by jumping from his home in a multi-story building.

After the CCP began to suppress Falun Gong in July 1999, court officials in Qingdao City framed a large number of practitioners under the pretext of their having violated Article 300 of the Criminal Law. Instead of conducting legal reviews or doing fact checks, the Qingdao Intermediate Court blindly upheld the primary verdicts. This affront broke the law, wronged the practitioners, and harmed their defending lawyers.

In China, prisons are managed by the Prison Administration Bureau, which operates under the Justice Department. There were 38 people in the justice system reported to have received retribution, including:

Yao Xishuang, former Director and Party Secretary of the Liaoning Prison Administration Bureau, was investigated for illegal activities in May 2021. Yao was also Deputy Chief of the Liaoning Justice Department. The Liaoning Justice Department supervises the Liaoning Prison Administration Bureau and the Labor Camp Bureau. After labor camps were shut down in 2013, many of the detained Falun Gong practitioners were sent to prisons. A 2018 Minghui report showed that at least 34 practitioners lost their lives due to torture at the Liaoning Women’s Prison alone.

There were 100 CCP officials who received retribution for suppressing Falun Gong, including:

Zhou Jiku, 64, former Party Secretary of Sijia Village in Xingcheng City, Liaoning Province is one example of a CCP official receiving karmic retribution. Practitioners told him many times what Falun Gong is, but he refused to listen. Instead, he blindly followed the persecution policy, especially during the “zero-out” campaign of 2020 under which Falun Gong practitioners on a government blacklist were targeted in attempts to force them to give up the practice. Working in concert with township and PLAC officials, he tried to coerce practitioners into signing documents renouncing their belief. In early 2021, Zhou was diagnosed with two types of cancer and died one month later.

Twenty people from various businesses were reported to have received retribution, including:

Zhang Yunjin, Director of the Transplant Center at Qingdao University, died suddenly at age 57 on February 26, 2021. He was said to have jumped from the 16th floor of the hospital. Numerous articles in Minghui have revealed a connection between Zhang and the Chinese regime’s forced organ harvesting of Falun Gong practitioners.

Eight ordinary citizens also met with consequences for their involvement in the persecution of Falun Gong. They included three in Hebei Province (Shi Lijun, Gao Wanyin, Ma Shulin), two in Heilongjiang Province (Liu and wife), two in Shanghai (Zhou Meiying and husband), and one is Sichuan Province (Zhai Xiuhua).

There is a Chinese saying that “Good is rewarded with good and evil meets with evil.” Falun Gong practitioners wish people only goodness, health and safety, and have reached out continuously over the past 23 years, telling people the facts about the practice and exhorting them to stop from doing evil in persecuting Falun Gong. But some officials and ordinary citizens chose not to listen.

Heilongjiang and Hebei Provinces have played a leading role in suppressing Falun Gong, and the number of retribution cases in these provinces is also the highest. We sincerely hope that more people will act according to their conscience, support the innocent, and reject the CCP for a brighter future.