(Minghui.org) Today's news from China includes incidents of persecution that took place in 13 cities or counties in 8 provinces, where at least 17 practitioners were recently persecuted for their belief. 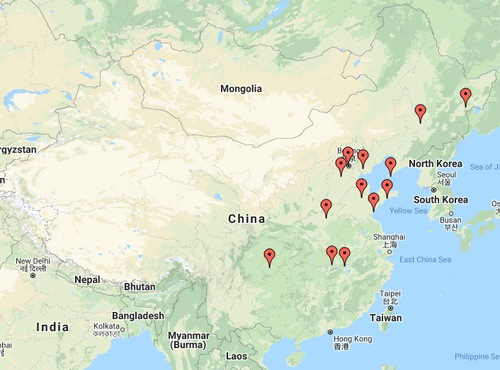 1. [Haiyang City, Shandong Province] Zhang Jiguo and Ji Lixiao Sentenced to One and a Half Years in Prison

Ms. Wang Yuhe was taken to the Liaoning Women’s Prison on December 30, 2021. She is currently detained in the No. 2 Ward.

Ms. Yang Duohui was recorded by a surveillance camera when she distributed a flyer in a restaurant where she was eating in Changgou Town. Several officers from the Changgou Town Police Station and the Hanchunhe Town Police Station went to her home in Wuhou Village at around 3 p.m. on January 5, 2022. Ms. Yang was arrested and detained in the Fangshan District Detention Center.

Mr. Zhu Yanlong was reported to police for talking to people about Falun Gong in the Nanzong Village Market on January 6, 2022. Officers from the Donglu Township Police Station arrested him and took him to the Qingyuan Police Department. His home was ransacked that afternoon.

Ms. Jing Fengmei was arrested by officers Wang Shuang and Liu Yang from the Anqing Road Police Station in Qikai District on the afternoon of October 28, 2021. She was first detained in the Weizigou Detention House, then transferred to the No. 4 Detention Center of Changchun City on November 13, 2021. She was placed under official arrest on November 27, 2021. The case against her was submitted to the Chaoyang District Procuratorate in late December 2021. Ms. Jing is currently being detained in Cell No. 104 at the No. 4 Detention Center.

Ms. Li Wenfeng, 61, was arrested by officers Yang Chengli and Duan Peng from the Hechuan Police Department on September 7, 2021. She was detained for 20 days in the Hechuan Detention Center. She was released on bail pending trial on the morning of September 27, 2021 after her husband was pressured to sign the three statements on her behalf.

Ms. Li’s husband was informed by officer Yang Chengli on December 9, 2021 to bring his wife to the police department the next day. He was told that if his wife signed the statements in front of the procuratorate staff, her sentence would be reduced. Ms. Li did not comply and stayed away from her home.

Ms. Li’s pension has been fully deducted since August 2021, as well as 3000 yuan she deposited in her salary card. She is now penniless and her life is extremely difficult.

Ms. Cui Jianxiu lives in Xuejiamengyan Village, Xiaodian Town, Ju County. She has been detained three months longer than her detention term. Her family hired a lawyer for her. The case against her was submitted to the Ju County Court by the Ju County Procuratorate in early January 2022.

Mr. Chen Weiquan and his wife Ms. Pan Xihua were arrested at their home in the Didao District on September 15, 2021. Led by Ji Hui, head of the Didao District Domestic Security Division, the police officers ransacked the couple’s home. Their 5000 yuan in cash was stolen. Ji Hui denied stealing the money when he was asked for it.

The couple are in criminal detention and are being detained in the Jixi City Detention Center.

Ms. Luo Meiling, an out-of-town practitioner, was under the 24-hour surveillance by several officers from the Caisang District and the Economic Development District. The police are also monitoring the lawyers who are defending the practitioner.

Ms. Wang Xiaoqing was arrested by officers from the Zhangdian District Police Department around December 30, 2021. She was denied admission due to her mental state and was released after she was taken to a mental hospital and a doctor provided a written statement.

Ms. Wang lost contact on January 7, 2022. Her family couldn’t find her anywhere. It is now almost certain that she was arrested again.

Ms. Wang’s father died due to the persecution of Falun Gong. Her father’s death caused Ms. Wang to suffer a mental collapse. After she practiced Falun Gong her condition gradually normalized.

Numerous police officers from the Zhengzhou City Police Department and the Houzhai Police Station went to the rental apartment of Ms. Yang Shuxia and Mr. Guo Chuanjun on the morning of November 15, 2021. They ransacked the home and confiscated truth clarifying materials and a computer. The two practitioners were arrested and detained for two days and one night.

Ms. Yan Yinping, in her 60s, from Dashiba, Jiangbei District, was recorded by surveillance cameras when she mailed truth clarifying letters. Four officers went to her home and arrested her on December 16, 2021, and her home was ransacked. She was detained for ten days in the Cuntan Detention House of Jiangbei District, and released on December 27, 2021.