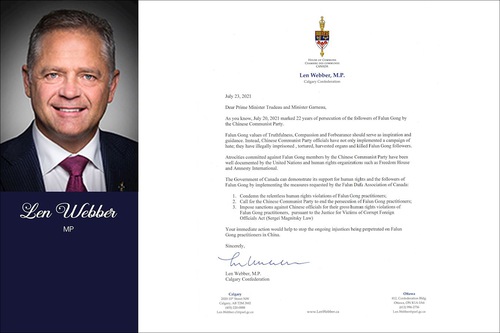 MP Webber said in the letter: “July 20, 2021 marked 22 years of persecution of the followers of Falun Gong by the Chinese Communist Party. Falun Gong values of Truthfulness, Compassion and Forbearance should serve as inspiration and guidance. Instead, Chinese Communist Party officials have not only implemented a campaign of hate; they have illegally imprisoned, tortured, harvested organs and killed Falun Gong followers.”

“Atrocities committed against Falun Gong members by the Chinese Communist Party have been well documented by the United Nations and human rights organizations such as Freedom House and Amnesty International.”

“Your immediate action would help to stop the ongoing injustices being perpetrated on Falun Gong practitioners in China,” he said.

Prior to MP Webber’s letter, 35 Canadian parliamentarians have sent a joint letter to Prime Minister Justin Trudeau, asking the Canadian government to stop the persecution and impose sanctions on Chinese Communist Party officials.

The parliamentarians stated, “We also urge our government to impose sanctions against Chinese officials for their gross human rights violations of Falun Gong practitioners, pursuant to the Justice for Victims of Corrupt Foreign Officials Act (Sergei Magnitsky Law).”

“On account of the gravity and scale of the human rights violations of Falun Gong, we believe that sanctions against the perpetrators will be effective in furthering the interests of international justice and human rights.”

One of the co-signers of the joint letter, MP Garnett Genuis, also the co-chair of the Friends of Falun Gong in the Canadian Parliament, emphasized in a separate video he sent to the Falun Gong practitioners that “Falun Gong practitioners, simply seek to emphasize truthfulness, compassion, and forbearance, but the Chinese Communist Party, fears their message of goodwill and has sought to eradicate Falun Gong, completely. I have joined Falun Gong practitioners, other parliamentarians and many sympathetic people from various backgrounds in advocating for an end to this persecution and a stronger response from the Canadian government. … I am pleased to stand in solidarity with you in these important efforts.”

During a rally in Edmonton on July 17, 2021, MP Michael Cooper remarked that it is time to stand up to the Chinese Communist regime. “Enough! It can’t go on!” he said.

MP Cooper said that the U.S. recently imposed Magnitsky sanctions on two CCP officials who have been involved with the persecution and he urged the Canadian government to apply the same sanctions on China’s human rights abusers, including freezing their assets in Canada and barring their entry into the country.

Ketty Nivyabandi, Secretary-General of Amnesty International Canada, also issued a statement to condemn the persecution. “Our call to the government of China remains as urgent today as it was 22 years ago. The Chinese government must be held accountable for upholding the human rights of all peoples in China,” she wrote.