(Minghui.org) Today's news from China includes incidents of persecution that took place in 8 cities or counties in 6 provinces, where at least 16 practitioners were recently persecuted for their belief. 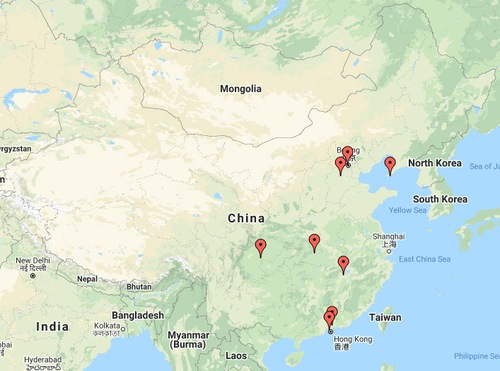 Mr. Lin Maocheng was tried by the Pulandian Court on February 4, 2021. The trial was adjourned because of insufficient evidence. Before the trial, at the court’s request, the Tianjin Judiciary Bureau ordered Mr. Lin’s attorney not to mention that Falun Gong was not illegal according to the laws of China in the not-guilty appeal.

Laishui County practitioner Mr. Chen Shuyi, 66, was arrested at home on May 25, 2020, and his home was ransacked. He has been held in Laishui Detention Center criminal detention since he was taken there from the Wangcun Town Police Station on the day after his arrest. It is said that he will soon be tried by the Zhuozhou Court.

He was arrested in March 2020 during the Zero-out campaign against practitioners. He was given a physical exam, including blood tests and nucleic acid tests, and was photographed. He was ordered to sign a document before being released. In August 2020, he was arrested by officers from the Fatou Police Station.

Ms. Yan Ping, a teacher from Boluo County, was sentenced to two years and three months in prison by the Huicheng District Court in late January 2021. She appealed to the Huizhou City Intermediate Court.

Ms. Yang Suhua, 74, was about to have lunch with her husband after 11:00 a.m. on February 3, 2021, when two officers from the Nanjin Road Police Station were entering their dining room. The officers saw a picture of the founder of Falun Gong on the top of a chest and ordered her to take it down. She refused. After a while of standstill, the officers left.

Ms. Gong Xiaohong, Ms. Zhu Yulin, and Ms. Yu Hong were arrested on January 29, 2021, and released from a brainwashing center before Chinese New Year. They were arrested by a dozen officers from the Baihuazhou Police Station, led by director Luo Xuebin. The officers ransacked their homes, took them to the police station, and interrogated them. The officers humiliated them with a strip search and took them to a brainwashing center in Fenghuanggou Vacation Village in Huangma Township. They were held there for days. Agents there tried to force practitioners to transform and write guarantee statements, coerced their families into pressuring them, ordered them to hand in their house deeds as pledges, and claimed they would send them to court.

Ms. Hu Guilan, nearly 80, was arrested and taken to a detention center by officers from a local police station on February 5, 2021, after someone reported her for talking to people about the persecution of Falun Gong. The detention center did not take her in because her blood pressure was too high. She was released the same day.

Ms. Zhu Muzhen and Ms. Fan Zirong of Jingmen petrochemical industry system were arrested on February 4, 2021. It was said that they were arrested by officers from Longquan Police Station. Ms. Fan was released. Ms. Zhu has been detained. Details are unknown.

On  Chinese New Year day, an officer from Guiyuan Police Station ordered Liu to take a (COVID) nucleic acid exam and physical exam on February 17. The exams were required before police took a person to a detention center.

Ms. Wang Yumei was arrested at home by officers from the Nantou Police Station on December 15, 2020. She was detained for 15 days and released on December 30.

She was arrested again in early January 2021 and detained at Nanshan District Detention Center.

“Once Incarcerated for Nine Years, Tianjin Woman Sentenced to Another Three Years for Her Faith”