(Minghui.org) Today's news from China includes incidents of persecution that took place in 13 cities or counties in 9 provinces, where at least 31 practitioners were recently persecuted for their belief. 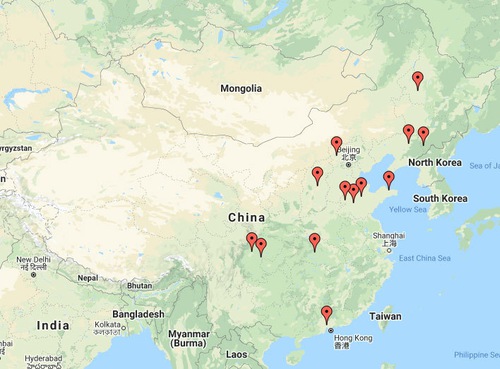 The Chinese Communist regime started the “Zero-out” campaign in 2020, a concerted effort to force every practitioner on the government’s blacklist to renounce Falun Gong. Jinzhong Prison, Shanxi Province, started its own “Zero-out” campaign on September 16, 2020.

Warden Zhang Wenping and deputy warden Li Liangjun directly led the campaign. Education Sector deputy director Zhang Guodong, who is in charge of persecuting Falun Gong practitioners, supervises all wardens and instructors who torture the practitioners held in their wards. Guards order practitioners to stand or face the wall for prolonged periods of time, hang them up in the air and beat them, lock them in solitary cells, confiscate any food they have purchased and instead give them a steamed bun as a daily meal.

The guards order practitioners to write a guarantee statement, and order them to denounce Falun Gong. Not a single practitioner has been spared.

Ms. Li Yuying, in her 60s, was arrested by officers from the Wuyi Road Police Station on February 6, 2021. Her neighbor said she was sentenced to three years in prison.

Ms. Liu Chunhua was sentenced to 18 months in prison

According to incomplete statistics, since November 2020, in three areas – the city areas of Taishan District and Daiyu District, over 30 practitioners were harassed and arrested. Their homes were ransacked. Five were formally arrested. One was released on bail for health reasons. Ms. Xie Qingling, Mr. Gao Fangqiang, Ms. Yang Huixia, and Ms. Zhou Min have been held at the Taian City Detention Center for over 70 days.

On January 29, 2021, three officers from the Shankou Police Station went to Ms. Zhang Wenying’s barber shop, ordered her to open drawers for inspection, and questioned her as to whether she still practiced Falun Gong.

On February 2, 2021, officers from the Qiujiadian Police Station arrested Ms. Wang Xia at home, seized a picture of the founder of Falun Gong and several Falun Gong books, and took her to the police station. She was released that night.

The same day, two community officers from the Daimiao Police Station went to Mr. Zuo Yongtai’s home as a “follow up,” and conducted a search of all his rooms. Mr. Zuo, 65, is a retiree of Taian Aerospace Special Vehicle Corp. His home was once ransacked by officers from the Taishan District Domestic Security Division and Daimiao Police Station on January 12, 2021. His daughter Ms. Zuo Li was arrested and detained for eight days.

On February 3, 2021, three officers from the Daizhongfang Police Station knocked on the door of Ms. Qi Dongling’s home both in the morning and afternoon. Ms. Qi, 59, a retiree of Taian Water Company, received a harassing call during the night. On the morning of February 4, the police called her daughter. Four officers went to her daughter’s home after 9:00 a.m. while her daughter was at home alone, searched the place, and seized calendars from previous years. Her daughter was very frightened. She told her mother that her home looked like a bomb had gone off, and she was worried that she would be arrested.

On February 3, 2021, officers from the Yingsheng Police Station went to Ms. Ma Yulian’s home. Ms. Ma, 64, did not open her door. She received a harassing call from the police the next day.

On February 4, 2021, a group of officers from the Yingsheng Police Station went to Ms. Zhao Xianglian’s home. Ms. Zhao is 70 years old. Police seized a picture of the founder of Falun Gong, and Falun Gong books and drawings.

Officers from the Daizhongfang Police Station harassed Ms. Guo Jinghui. They asked her if she'd met with any other practitioners or distributed Falun Gong flyers, etc. Ms. Guo, 84, is a retiree of Shandong Science and Technology University.

Mr. Qu Kean, 67, is being held at the Zichuan District Detention Center. His family is not allowed to visit him. The police are planing to submit his case to the procuratorate.

Mr. Qu was arrested at home on November 11, 2020. Police ransacked his home and seized many personal items. It’s reported that several practitioners in his area were arrested on the same day.

Mr. Xu Dewu of Xinbin County was arrested by officers from the local police station on October 21, 2020. The officers took him to the county police department and arranged a physical exam. He did not cooperate. Later, he was forcibly taken to Fushun City for a nucleic acid test, and has been held at the local detention center since October 22, 2020.

The Shuncheng District Procuratorate submitted Mr. Xu's case to the Shuncheng District Court. The court will finish the case by April 25, 2021. The court said he could hire an attorney or a relative for his defense. If it was a relative, he or she should have no criminal history, and must obtain a criminal history disclosure from the police station and a proof of relationship from the community.

Ms. Zhu Mozhen and Ms. Fan Zhirong were arrested by officers from the Longquan Police Station on February 4, 2021. Ms. Fan was released. Ms. Zhu is still in police custody.

Mr. Wang Youqin, 86, and wife Ms. Liu Qixian, 82, were harassed at home on the morning of February 6, 2021 by a dozen officers from the Yingsheng Police Station and the Zhoudian Police Station. The officers seized a picture of the founder of Falun Gong, two sets of Falun Gong books, three copies of Zhuan Falun, two Falun Gong table calendars, four calendars, and other items. They stayed for about an hour.

Ms. Lei Xiuying, 70, a retired teacher, received a harassing call from an officer from the Yingsheng Police Station.

Mr. Zhang Jiguo and Mr. Zhang Junfeng were formally arrested, and their cases were submitted to the procuratorate. The Haiyang Domestic Security Division called their families, asking them to sign a document on February 8, 2021. The two practitioners were arrested during the large-scale arrests of January 9, 2021.

Mr. Mo Xinzhong received a call from the Gaotang County Domestic Security Division on February 8, 2021. The caller ordered him to report to the Gaotang Police Department early on the morning of February 9, then go to the Donga Procuratorate because his case would be submitted there.

The arrests of Ms. Li Shuchun and Ms. Yang Haixia were approved.

Ms. Xiang Xiqiong was arrested at home by officers from the Bajiaojing Town Police Station and agents from the local procuratorate around 8:30 a.m. on February 3, 2021. She was taken to the procuratorate. She was released around 11:00 p.m. after her daughter was forced to sign a document.

“Fuyang City, Anhui Province: Nine Residents Given 8 Months to 12 Years for Their Faith”