(Minghui.org) Today's news from China includes incidents of persecution that took place in 18 cities or counties in 7 provinces, where at least 28 practitioners were recently persecuted for their belief. 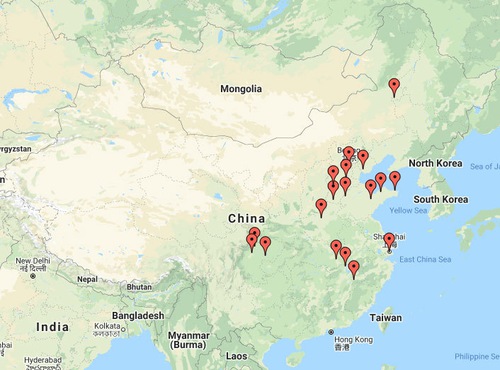 Ms. Li Shuyun and her son Mr. Fu Yujie from Fengtai District were arrested by officers from the Heyi Police Station on May 13, 2017.

A year after Ms. Li had returned home from prison, she was arrested again for distributing Falun Gong materials in a supermarket on June 28, 2020. She was later sentenced to a three-year-and-six-month prison term.

Members of the Ulanhot City 610 Office and personnel from the public security, procuratorial, and court system arrested Ms. Gao Jinlian and Ms. Qin Yuxia in early January 2021. Both practitioners were taken to the Hohhot City No. 1 Women’s Prison.

Ms. Jia Fengyan, who had been held in the Ulanhot City Detention Center for several months before being sentenced to prison, was also taken to the Hohhot City No. 1 Women’s Prison.

Mr. Zhang Jun was sentenced to a two-year-and-six-month prison term. Yet his family has not received the judgment from the Nanchong Intermediate Court.

On January 5, 2021, his family received a letter from the Jiazhou Prison notifying them that Mr. Zhang had been taken to the No. 9 Ward, Jiazhou Prison in Leshan City.

Ms. Wang Fenghua was recently sentenced to a three-year-and-six-month prison term. She was scheduled to be taken to prison after Chinese New Year’s Day on February 12, 2021.

Personnel from the Wendeng District 610 Office went to Ms. Yu Yingchun’s home on the afternoon of January 15, 2021. They ransacked the place and confiscated all Falun Dafa books, Minghui Weekly, Zhengjian Weekly, Falun Dafa lectures on DVD and audiotapes, eight Chinese New Year paintings, and two speakers. Ms. Yu was taken to the police station for interrogation. The officers pressured her to sign paperwork, but she refused.

The officers called her husband and son to come and pressured them to sign paperwork on her behalf. They were all released that night.

Mr. Wang Wenchang from Nanhedu Township had been held in the Zhengzhou Prison. It had been only a few months since he returned home before he was arrested again recently.

In the absence of any evidence, they suspected that Falun Gong posters were posted by her, and they ransacked her home and confiscated all her Falun Dafa books, citing the posters as the cause. Ms. Zeng was not at home then.

Ms. Li Huaping, Ms. Li’s husband, and Ms. Ren were reported to the police on February 1, 2021, while they were talking to people about Falun Gong in Majiazhuang Village in the Taihang mountains area. The three elderly practitioners were arrested and taken to the Majiazhuang Police Station.

Ms. Li fell down when the officers pushed her and she lost consciousness. After being taken to the township hospital, she was found to be in serious condition. The hospital refused to admit her.

Ms. Li and her husband were taken back home by officers. Their car was impounded. Ms. Ren was released the following afternoon.

The officers ransacked the practitioners’ homes on the afternoon of February 4.

The three practitioners were summoned to the police station on February 5. They were pressured to write guarantee statements and pay fines.

The staff members of Xinzhuang Township government, led by Xujiatuan village committee staff members, went to Ms. Wang Xiaofang’s home to harass and threaten her on the morning of February 4, 2021. They pressured her to sign paperwork, but she refused.

Ms. Xiang Xiqiong from Bajiaojing Town was again arrested at home on February 3, 2021. She had been harassed several times prior to this arrest.

Ms. Li Muzhen from Ciyutuo Town, Luanzhou City, was reported to the police while talking to people at Luannan County Farmers' Market about Falun Gong on January 25, 2021. She was arrested and taken to the Bencheng Police Station. She was brought home at noon.

Two officers from the Liyuan Town Police Station, Kaiping District, went to Ms. Sun Yumin’s home and harassed her on January 20. They videotaped her and pressured her to sign paperwork, but she refused.

Six or seven people from the Lianxi Domestic Security Division and the Shili Police Station, led by domestic security officer Yu Liang, broke into 77-year-old Ms. Wu Shufang’s home and ransacked the place on February 2, 2021. They confiscated photos of the founder of Falun Gong, Falun Dafa books, and a computer.

Ms. Wu was taken to the police station for interrogation. She is being held in the Jiujiang City Detention Center.

Bian is currently under house arrest and is scheduled to be taken to the detention center once the pandemic is over. It was reported that Bian was sentenced to two years in prison.

Ms. Fan Guoping from Putuo District was reported to the police for talking to people about Falun Gong. She was arrested and taken to a police station. Two days later, she was taken to the Changning District Detention Center.

Her husband was upset by her arrest and had a stroke. He is now in the hospital.

Mr. Mo Xinzhong was arrested on February 9, 2020. The police ransacked his home and confiscated several printers as well as cash. He was released on bail on February 12.

On February 2, 2021, the Gaotang County Police Department called him and told him to go to the police department at 8 a.m. the next day; otherwise he would be detained.

Ms. Li Hualan, 78, from Taiping Town, was harassed and her home ransacked by over 10 State Security officers including Cao Huajun on January 13, 2021.

Officers pressured Ms. Li to write and sign guarantee statements. They said that if she wrote a guarantee statement and signed her name, they would stop coming and could also give her a 1,000-yuan living allowance. Ms. Li refused.

Ms. Li Shuxiang from Weicheng District was arrested and taken to the Beiguan Police Station by plainclothes officers on January 11, 2021, for talking to people about Falun Gong.

The officers took her USB drives, printed materials, and paper bills with Falun Gong facts written on them.

Officer Wang Haoyu notified Ms. Li’s daughter at 10 p.m. that night to prepare 1,500 yuan for her physical examination. Wang said that if Ms. Li failed the exam, she would have to pay a bail of 10,000 yuan.

On January 12, the police took 1,200 yuan from Ms. Li’s daughter. That afternoon, officer Wang and others ransacked Ms. Li’s home. They confiscated over 40 Falun Dafa books, 500 yuan in paper currency with Falun Gong messages, a USB flash drive, and two keepsakes. The officers wanted the family to sign the list of confiscated items, which Ms. Li and her daughter refused. Ms. Li was taken the Changyi Detention Center, which is over a dozen miles away from her home.