(Minghui.org) Today's news from China includes incidents of persecution that took place in 15 cities or counties in 10 provinces, where at least 30 practitioners were recently persecuted for their belief. 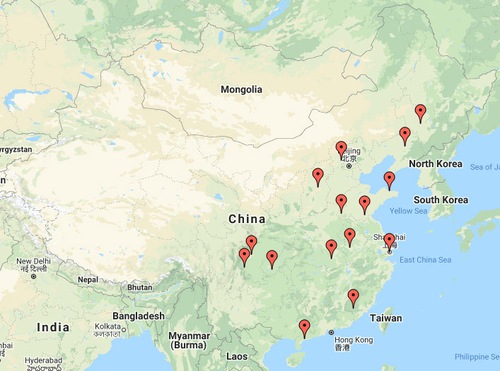 Ms. Xu Xiuying was arrested and taken to the Donghuayuan Police Station on January 17, 2020, after someone reported her for distributing Falun Gong flyers in an open market. She was interrogated, photographed, and videotaped. The same day, officers from the Donghuayuan Police Station and Xiaonanxinbao Town, as well as the village Communist Party secretary, ransacked her home. They seized Falun Gong books, MP3, cell phone, flash drives, Falun Gong calendars, copies of Minghui Weekly, and other items. They forcibly took her fingerprints, picture, facial recognition data, etc. Four officers drove her to the Zhangjiakou Infectious Disease Hospital for a physical exam, including an ultrasound, X-ray, liver function test, urine test, blood test, and blood pressure test. She was taken to the Zhangjiakou Detention Center but was not admitted because her blood pressure was over 145/240. She was released after 1:00 a.m.

In February 2020, she was harassed at home in by Zhao Lei and Duan Haili from the Xiaonanxinbao Town government.

In mid-March 2020, she was harassed at home by village secretary Zhao Yongtao and Xiaonanxinbao Town secretary Xu Lixin.

A week later, Xiaonanxinbao Town deputy secretary Zhang Shigang, Duan Haili, and Zhao Yongtao went to her home. They told her husband to go to Huailai County Medicine Center for a free doctor visit. When she and her husband went there the next day, however, they were taken to the Dahuangzhuang Brainwashing Center.

Around May 10, 2020, village secretary Zhao Yongtao threatened her husband, saying their children’s future would be harmed by her Falun Gong practice.

On May 15, 2020, Zhao brought a printed form that defamed Falun Gong and ordered her to sign it. She refused.

On May 20, 2020, Zhao told their family to have her and her husband report to the village committee at night. The couple did not go. They then harassed their children.

Ms. Jia Zhanhua was harassed at home by Xiaonanxinbao Town deputy secretary Zhang Shigang, Zhao Lei, and Duan Haili on the morning of April 26, 2020. She stopped them from taking pictures at her home. Zhang said they would have her go to a “seminar” (brainwashing session) hosted by the county.

Mr. Jia Lei was taken to the Dahuangzhuang Brainwashing Center on June 9, 2020. He was held there for 58 days. Town clerk Sun Qixing closely monitored him at all times. He was repeatedly harassed after his release.

Zhang Yu, gender unknown, was taken to Dahuangzhuang Brainwashing Center on June 9, 2020. Zhang was held there for over 20 days and was repeatedly harassed after being released.

Ms. Chang Xiaoqin was arrested on February 7, 2020. Someone reported her to the property management for distributing Falun Gong flyers in the community. The property management reported her to the Donghuayuan Police Station. Eight officers broke into her home, searched it illegally, and seized a set of Falun Gong books, couplets, and copies of Minghui Weekly. The officers handcuffed her and took her to the Zhangjiakou City Detention Center. She was released on February 22, 2020.

Police went to her home to harass her again on April 10, 2020. She stayed away from home to avoid further persecution. She went home one day and found that her water and electricity had been cut off and her door was sealed with police tape. Police went to her hometown looking for her several times.

On June 3, 2020, she was arrested in her hometown, taken to the Dahuangzhuang Brainwashing Center, and threatened. Ruiyunguan Township deputy secretary Ji Shujun beat and kicked her. She was released on June 5.

On November 21, 2020, Ji had Dongwan Village secretary Feng Yunpeng take her to the office of the Commission for Discipline Inspection for questioning.

Ms. Zhao Xiuying was recently arrested at midnight by officers who broke into her home. She has been released.

Ms. Zhao, in her 60s, and Ms. Wang Yilin were arrested on April 20, 2020, when they were talking to people about the persecution of Falun Gong in Nanhu Park. Ms. Zhao was released on bail the next day after failing a physical exam. Ms. Wang was taken to the No. 4 Detention Center. She was sentenced to three and a half years in prison in a second court hearing around December 20, 2020.

Ms. Zhao was repeatedly harassed after that. The police called her family several times and ordered Ms. Zhao to report to them and “help investigate the case.” She did not go. They told her family that she would be put on a nationwide wanted list.

In the second half of 2020, officers and agents from the procuratorate looked for her in the homes of her son, her two sisters, and even her ex-husband, who had a new family.

Four officers called her son and harassed and threatened him. On the afternoon of January 19, 2021, several officers from Jiangsu Police Station searched her son’s home. They did not find her there and then threatened they would take her son away.

Ms. Hu Yuanzhen clarified the truth to community clerk Yue Huaying on October 27, 2020. She gave Yue printouts including government documents. Yue handed them over to the community’s Comprehensive Management Office director Wang Shirong. Afterwards, several officers went to Ms. Hu’s home, took her to a police station, and questioned her. She was released around 1:00 p.m.

Yue Huaying, Wang Shirong, and other clerks from the community went to Ms. Hu’s home to harass her on December 24, 2020. They took pictures using their cell phones. Yue ordered Ms. Hu to sign a guarantee statement to renounce her faith. Ms. Hu refused.

Ms. Liu Jianhua, her son Mr. Zu Linlin, and her daughter-in-law Ms. Guo Lingfang were arrested in February 2020 by officers from Liuqing Street Police Station. They were released on bail and repeatedly received harassing calls. An agent from Lanshan District Procuratorate called at the end of January 2021, said their case had been submitted to the procuratorate, and ordered the three of them to report to the procuratorate to have a written record made.

Ms. Sun Yishu disappeared from Hefei City on September 29, 2020. It was learned that she was arrested and is being held at Hefei Detention Center.

Ms. Li Ke, 69, was arrested by officers from Huanggu District Police Department on January 26, 2021, for distributing Falun Gong flyers in Fushan Garden Community where she lived.

Ms. Guo Xiuqin, nearly 70, was arrested at home by officers from Fugang Town Police Station in mid-January 2021. The officers ransacked her home, seized over 40 copies of Falun Gong pamphlets, and took her to the police station.

Ms. Liu Yuanfeng was harassed at home on January 8, 2021, by officer Liu Guangjian from the Sanshui Town Police Station, Sanshui Town mayor’s office, and others. They forcibly took pictures of her.

Ms. Shen Guixiang of Emeishan City was arrested by Jiajiang County police on January 22, 2021, for talking to people about the persecution of Falun Gong when she was shopping at a grocery store. She was detained for 15 days.

The next day, officers from the Jiajiang County and Shuangfu Town Police Station, Emeishan City, ransacked her home. Her daughter and son-in-law went to visit her with her clothes, but the detention center did not allow them to see her.

Ms. Fan Guoping was arrested in late January 2021 for talking to people about the persecution of Falun Gong.

Ms. Duo Taihui and Ms. Deng Wanying were scheduled to be tried in Lu County Court on February 3, 2021.

Ms. Li Shihong was arrested by two plainclothes officers on January 29, 2021, while she was walking to her electric bike after shopping. Her whereabouts are unknown.

Ms. Wang Kairong was harassed at home by officer Xiao from Lianshan Town Police Station around 8:00 p.m. on January 24, 2021.

The three practitioners were taken to the police station. They were abused during interrogation and not allowed to sleep the whole night. Ms. Wang Xiumin had pain in her ear even the next day because of the abuse. At night, officers ransacked Ms. Zhang’s home and seized Falun Gong calendars, talismans, and other items. They ordered Ms. Zhang to take them to tear down Falun Gong flyers in Shengjiagou Village the next day. The practitioners were released at sunset on January 28.