(Minghui.org) A Yangquan City, Shanxi Province resident was arrested in 2015 for practicing Falun Gong and later sentenced to four years to Qixian Prison. He was subjected to brutal torture in prison for upholding his faith. The police continued to harass him after he was released.

My name is Wang Bingde. I am a retired coal miner. I used to have high blood pressure and leg pain. After I began to practice Falun Gong in June 1999, these symptoms disappeared and I enjoyed the feeling of being illness-free.

After the persecution of Falun Gong was launched on July 20, 1999, I did not give up my faith. I used my commute hours to tell people the facts about Falun Gong and handed out Falun Gong materials.

My wife suddenly had a serious disease in 2013. She could not talk or walk. She became incapacitated. She was treated in the hospital to no avail. I thus advised her to recite the auspicious phrases “Falun Dafa is good and Truthfulness-Compassion-Forbearance is good” every day. In the beginning, she recited in her heart because she could not talk. Gradually, she was able to recite these phrases aloud.

My wife was given a second life. She told everyone she met with about the health benefits of Falun Gong.

One evening in January 2015, several police officers from Yangquan Police Department and 610 Office broke into my home and arrested me. The police took away my Falun Gong books, informational materials, computer, printer, and tens of thousands of yuan. The arrest has caused great harm to my family, financially and mentally. I was held at the Yangquan Detention Center.

Later that year, I was sentenced to four years in prison and was taken to Qixian Prison. Every day, I was forced to watch TV programs that slandered Falun Gong. The authorities forced every prisoner to do unpaid labor, calling it “labor reform.” I argued that the practitioners are good people and there is no need for reform.

Because of my insubordination, I was taken to a unit and subjected to strict control. I had to get up at 5 a.m. and stood in the courtyard until evening every day in the cold winter, causing severe frostbite on my feet and ears. I was also forced to memorize the prison rules. If I disobeyed, several drug-addict inmates would strip off my clothes and severely beat me. They then poured cold water on my body. This prison was really a place like living hell. 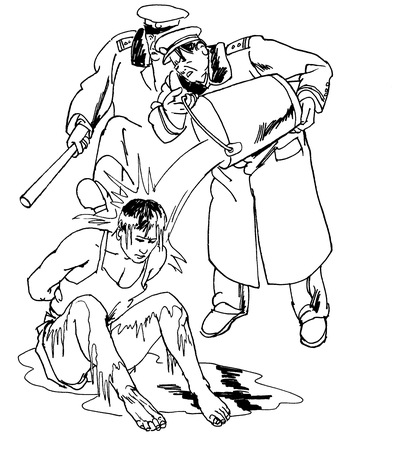 The harassment continued after I was released. In September 2020, two officials from the community came to check on me one day. I clarified the facts about Falun Gong to them.