(Minghui.org) Today's news from China includes incidents of persecution that took place in 13 cities or counties in 9 provinces, where at least 35 practitioners were recently persecuted for their belief. 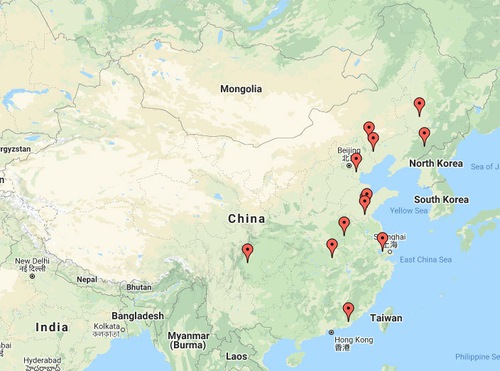 Ms. Zhang Huimei, in her 70s, and Ms. Cui Huimin, in her 60s, were arrested by officers from the Wanxing Police Station on April 23, 2019. Their homes were ransacked. They were held at the Nankai District Detention Center. It was said they handed out Falun Gong flyers to people and were caught by the surveillance system.

After they had been detained for over a year, at the end of 2020, the Nankai Court sentenced Ms. Zhang to 20 months in prison, and Ms. Cui to 44 months in prison. Ms. Zhang was released on December 22, 2020. Ms. Cui is still being held in prison.

Ms. Liu Wenrong, in her 70s, was arrested at home by officers from the Wanxing Police Station and the Nankai Police Department on June 6, 2019. She has been held at the Nankai Detention Center. She was sentenced to 4.5 years in prison at the end of 2020. She has appealed.

Mr. Gao Yuan was arrested on August 13, 2020 after someone reported him. He has since been held at the Lingyuan Detention Center. Procuratorate has approved his arrest.

Ms. Cong Lina was repeatedly arrested by local police. The officers did not find Ms. Cong this time, so they recently turned to her child. They ordered the child to write a guarantee statement for her, and threatened him with various punishments from the city police department if he does not comply.

Ms. Li Yanying was sentenced to three years of house arrest by the Yinan County Court in January 2020. She must report to the police department each week and be monitored by someone from her village.

Ms. Yu Yanai and Ms. Li Xiaomei were arrested on January 19, 2021. Ms. Yu was detained for 15 days. Ms. Li was falsely charged by officer Shen Wenfeng from the Domestic Security Division. She was formally arrested and taken to the Linyi Detention Center after she had been held at the Mazhan Police Station for four days. The detention center did not admit her. After paying 3,000 yuan, she was released on bail on January 21.

Mr. Zhang Xizheng and wife, from Yishui County, were arrested in Yancheng City, Jiangsu Province, by officers from the Chengbei Police Station, Yancheng City, on January 25, 2020. The wife was released. Mr. Zhang’s situation is unknown.

Ms. Luo Muqin was harassed and ordered to sign a statement renouncing Falun Gong on January 20 and 28, 2021. She refused. The Wuhan City Community set up the harassment, which was carried out by Gong Lianghan, a former practitioner who has since turned against the practice.

Ms. Wang Jiechun was videotaped by officers from the Domestic Security Division when she was distributing Falun Gong flyers on April 15, 2020. She was arrested by officers from a police station. Her home was ransacked. She was detained at the Jieyang City Detention Center. She was sentenced to nine months in prison by the Jiedong District Court recently. She has been released.

Mr. Zhu Zhenxing was going out of town for work in March, 2020, but was arrested by officers in the Jinzhou Railway Station for buying a ticket using cash which had Falun Gong messages printed on it. He was released several hours later.

On January 23, 2021, Mr. Zhu was arrested at a construction field by officers from the Jinzhou Railway Station Police Station and the Wuhua Police Station.

Ms. Yu Lanfang of Weifang City, Shandong Province was stalked and arrested in Suzhou City by officers from a local police station on January 27, 2021 when she was distributing Falun Gong flyers. Ms. Yu was visiting her daughter in Suzhou City. All of her personal items were confiscated.

Mr. Hu Yugen, 71, was called and ordered to meet Qinglong Town director Song by village judicial clerk on the afternoon of January 28, 2021. He went to the village committee and talked to director Song and another person for more than an hour. He talked to them about Falun Gong and encouraged them to choose a good future for themselves.

“Let's Hurry Up and Eliminate Our Last Human Attachments”