(Minghui.org) Tanotorvi, a Finnish monthly magazine, ran a cover story titled “Falun Dafa for 15 Years in Kannelmäki” on November 3, 2021. The article reported in detail about when Falun Dafa was introduced to Finland and the ongoing persecution of the spiritual practice by the Chinese Communist Party (CCP). 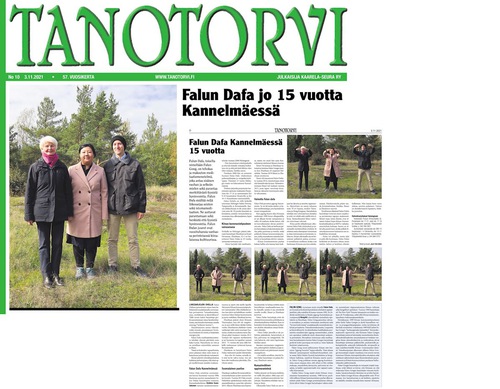 Founded in 1964, with a monthly readership of 80,000, 98.94% of people know about the magazine and it enjoys an excellent reputation. Tanorvi has always been part of daily life in Kaarela, a suburb about 10 kilometers north of downtown Helsinki. Kannelmäki is a neighborhood within Kaarela.

The report stated, “Falun Dafa is an effective and free practice that improves people’s health both physically and mentally. Falun Dafa is rooted in traditional Chinese culture for thousands of years. It includes five sets of exercises and also emphasizes the use of the universal principles of truth, compassion, and tolerance to improve oneself and improve one’s character, which the Chinese call ‘xinxing.’ This exercise helps to reduce stress, improve physical and mental health, and strengthen one's own energy. With the five sets of exercises of Falun Dafa, everyone can practice according to their own schedule and busy work.”

From Sweden to Finland

The article talked about how Falun Dafa came to Finland. “The exercise was first introduced to Finland by Finnish practitioners living in Sweden in 1998. Two years later, Sinikka from Kannelmäki first heard about Falun Gong at a health expo. ‘I learned the exercises at a health expo. It was comfortable and pleasant so I have practiced Falun Gong since then,’ she said.”

Since 2008, Sinikka has served as the head of the Falun Dafa Society of Finland and the spokesperson of the organization. She has also organized various activities for practitioners in Kannelmäki.

The report also had a story about a Chinese woman who fled China during the persecution and eventually married and settled in Helsinki.

The article discussed the ongoing persecution in China. “Falun Dafa is based on Qigong, which is an ancient form of physical and mental meditation. In the early 1990s, when Qigong fever re-emerged in China, it played a positive role in improving people’s health. Falun Dafa immediately attracted a lot of people to learn and practice, which caused the CCP concern and it began a full-scale persecution of the cultivation practice.

“Falun Dafa practitioners are not interested in political and social changes per se. This is a human rights issue. Everyone has the right to their own spiritual life. … The CCP's persecution, imprisonment, beating, torture, and even live organ harvesting of Falun Gong have led to many practitioners to go into exile overseas. Despite this, there are still millions of practitioners practicing in private in mainland China.

“However, in foreign countries, Falun Dafa is an accepted and popular practice method. In about 70 countries, especially in Taiwan and Hong Kong, there are hundreds of thousands of practitioners. The cultivation of Falun Dafa can be done either collectively or individually, indoors or outdoors.”

The report ended with a detailed introduction to Falun Gong: “Falun Gong, also known as Falun Dafa, is a dual life and spirit exercise introduced in China in 1992. Founder Li Hongzhi combined the meditation and slow qigong practice with the moral teachings and philosophy. Falun Gong strongly emphasizes the importance of ethical behavior, and cultivates virtue by following the core principle of Truthfulness, Compassion and Forbearance. Through moral improvement and meditation, Falun Gong practitioners strive for better health and spiritual enlightenment.

“Falun Gong emerged in the later stage of China’s ‘Qigong fever.’ Falun Gong is different from other qigong schools in that it has no fees, no membership system, and no worship rituals. All learning materials are available on the Internet for free.

“Although Falun Gong initially enjoyed a high reputation among the Chinese authorities, after the mid-1990s, the Chinese Communist Party gradually regarded Falun Gong as a potential threat. The reason is the large number of Falun Gong practitioners, and this method is independent of the CCP’s ideology and other religions. According to estimates quoted by the New York Times, there were more than 70 million Falun Gong practitioners in 1999, surpassing the total number of members of the Communist Party of China.

“Falun Gong practitioners in China are subject to widespread human rights violations. It is estimated that hundreds of thousands of people have been detained without trial. The detained practitioners have been subjected to forced labor, mental abuse, severe torture, brainwashing, and even death by forced organ harvesting at the hands of the Chinese authorities. However, apart from mainland China, no other places in the world prohibit, restrict or regulate the practice.”