(Minghui.org) Today's news from China includes incidents of persecution that took place in 19 cities or counties in 11 provinces, where at least 55 practitioners were recently persecuted for their belief. 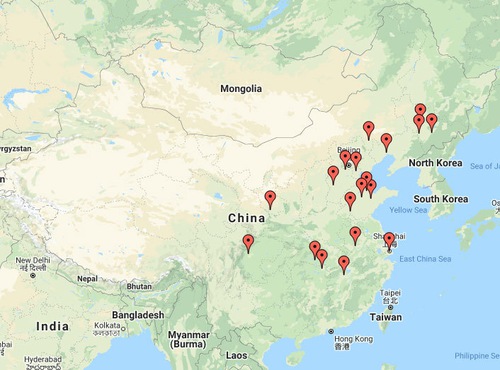 Ms. Li Caixia from Taihe County of Fuyang City works in Hefei City. She took Ms. Zhang Ling on her e-bike and went to Binhe to distribute truth clarifying materials. They were arrested by the police officers who were tracking and monitoring her on the night of November 2, 2021. Her home was ransacked the next day. Practitioner Sun’s home was also ransacked. Ms. Li and Ms. Zhang were both detained.

Ms. Liu Jinlan was arrested right in front of her home when she was returning home on November 5, 2021. Four officers took her to the Sheling Police Station in the Shuangyang District. Then they went back to ransack her home. Many personal belongings were confiscated, including a photo of Falun Gong’s founder, six Falun Gong books, a media player, USB drive, etc.

Ms. Liu was interrogated in the police station, but she refused to cooperate. She was taken to have a physical exam and a nucleic acid test, and was found to have high blood pressure up to 177 and a tumor in her liver. When she was taken to the Weizigou Detention House, she went through the physical exam again, but was denied admission because of her high blood pressure. Her child was called to the police station and was pressured to write a guarantee statement on her behalf, otherwise Ms. Liu would not be released. Her child gave in and Ms. Liu came back home with her child around midnight.

Ms. Liu Jinlan and Ms. Han Chunying were released. The other practitioners’ situations are unknown.

Mr. Wang Jinyu and Ms. Ji Mingming, both from Kalaqinqi, were sentenced to three years and four years in prison respectively. They appealed their cases, but were quickly rejected by the Kalaqingqi Court. They are currently still detained in the Kalaqingqi Detention Center because of the pandemic.

At least 12 practitioners were arrested in Jining City within a week or so. Here are some of their situations:

During the Shanghai International Expo on November 4, 2021, Ms. Zhou Ling and Mr. Chen Jie were placed under police surveillance. The officers came to the residential community where they live to monitor them.

Ms. Cao’s son took his two-year-old son to visit his classmate around mid-to-late October 2021. His classmate’s home was 50 km away. Four police cars suddenly showed up there and his son was asked where his mother was. The police tracked his phone and followed him to his classmate’s place. Now Ms. Cao’s son has quit his job and stays at home to take care of his child and his grandparents. The police still come back to harass them from time to time.

Mr. Deng Chuanjiu was released on October 15, 2021 after serving four years in prison. He was harassed by local community staff members and local police officers and was pressured to sign the three statements, which he refused.

Ms. Zheng Xiuju, Ms. Zheng Qiuguo and Ms. Feng Rongmei live in Dutong Village, Dahe Town, Luquan District. Because they distributed truth clarifying materials in a neighboring village in March 2021, they were taken to the Dahe Police Station for interrogation.

The three practitioners were harassed in June 2021 by officer Bai Xiangnan from the Dahe Police Station and had samples of their blood taken in the police station.

Officers from the Dahe Police Station went to the three practitioners’ homes in July, August, and September 2021 and pressured them to write guarantee statements and to undergo a physical exam.

Practitioners from Dutong Village, including Zhou Sheng, Wang Fengyin, and Li Zhenfang, were also harassed by officers from the Dahe Police Station this year during the Zero-out campaign. Their family members were harassed and threatened as well.

Ms. Sun Xueqin was arrested on May 18, 2021 and released on bail pending trial. Her family received a call from the Chengxi Police Station in Changle County on the afternoon of November 4, 2021, informing them that Ms. Sun went to the Xihe Community Office to take a photo. Ms. Sun did not go. The police called again the next day at around 10 a.m. on November 5, 2021. No one answered the call.

Mr. Zhang Guoqing, who is in his 50s, was reported to police by the village officials Gao Youguo and Wang Baowang in early September 2021 for talking to people about Falun Gong in Mapengwa Village. He was arrested and detained in the Wuqing Detention Center.

Ms. Feng Meiru, around 70, was recorded by surveillance cameras when she put up stickers around late July or early August 2021. She was arrested and detained in the Wuqing Detention Center.

Ms. Jiang Shutao, 66, lives in the residential compound of Hongri Industrial Co., Ltd. in the Jintao Development Zone. She was arrested on the train when she returned to Yueyang City from Guangzhou City on November 1, 2021.

Officers from the Chaoyang Police Station in Haibin District went to the homes of Bai Xingwen and Ms. Yang on October 6, 2021. Ms. Ji Yingmei, Ms. Wang Ying and Mr. Li Long were there too. The officers claimed to take the practitioners to the Xianhe Town Hospital for nucleic acid tests, but they actually took them to a detention house. Ms. Bai and Ms. Yang were denied admission due to their high blood pressure. Mr. Li Long was beaten for refusing to take the physical exam.

Ms. Fang Zhilan, who is in her 60s, lives in Xiaohongshi Village in Hongshi Town. She has been subjected to forced labor before. Several officers from the Hongshi Town Police Station including Yang, head of the police station, went to her home on October 18, 2021. They confiscated a photo of Falun Gong’s founder from her home.

Ms. Wang Wenjing was arrested near her home when she returned from her work at around 5 p.m. on November 5, 2021. Her home was ransacked. She was taken to the Gongyuan Police Station. She was injured when those people forcibly took her bag and her house key from her. When she was examined in the hospital, she was found to have neck injuries. As a result, she had a hard time swallowing and was unable to raise her head when she lay down.

Ms. Wang refused to cooperate during the interrogation. She was placed in 10-day detention on the morning of November 6, 2021. It was later changed. Ms. Wang was released on bail pending trial that afternoon.

Ms. Cui Weiwei was arrested by officers from the Xingfu Police Station in the Chaoyang District on November 9, 2021. Her home was ransacked. Her personal belongings were confiscated including a computer, a printer, some paper bills imprinted with Falun Gong facts, 200,000 yuan, etc. Only her son’s cell phone has been returned.

Ms. Cui had two hearings in Chaoyang District Court on May 14, 2021 and September 5, 2021. Her family was not informed about them. The verdict has not come out yet. Ms. Cui has been detained in the No. 4 Detention Center for nearly one year.

Ms. Fu Jinfeng, 59, was arrested by officers from the Dunzitang Police Station around October 16, 2021 for talking to people about Falun Gong. She was placed in 15-day administrative detention and was detained in a detention house. She was under official arrest on November 1, 2021 and was taken to the No. 1 Detention Center of Nanchang City.

Ms. Feng Tingting was arrested on October 19, 2021 and has been detained for 20 days. Her electric bike was confiscated. Her family has not been informed where she was detained.

Ms. Dou Xueqin lives in Wangou Village, Baishui Township, Kongtong District. Three police officers went to her home around 3 p.m. on July 2, 2021 and took her to have a physical exam. She was then detained in the police department for one night. The next day, after she refused to sign a guarantee statement, she was placed in 10-day detention, which was later extended by another five days. A few days after she was released, she received a harassing call from police pressuring her to sign a guarantee statement.

“70-year-old Woman Passes Away After Two Decades of Persecution”