(Minghui.org) Today's news from China includes incidents of persecution that took place in 17 cities or counties in 9 provinces, where at least 34 practitioners were recently persecuted for their belief. 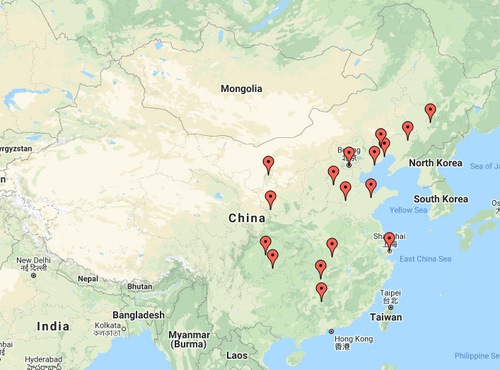 It was reported that Ms. Yu Dezhen, Ms. Shi Meilan, and Ms. Liu Cuimei from the Huinong District were taken to the Yinchuan Women’s Prison from the Shizuishan Detention Center on September 18, 2021. Ms. Chen Xiuping, a native of Shaanxi Province, was taken to the Shaanxi Prison.

Ms. Yu was severely abused in the detention center, and her physical condition deteriorated. She suffered from a prolapsed uterus. She could not walk on her own, and others had to help her along.

Up to now, the prison officials have not allowed relatives to visit the four practitioners and threatened that they would not be allowed to meet them unless they were transformed.

Ms. Yu, Ms. Chen, Ms. Shi were arrested by domestic security officers on April 30, 2020. Their homes were ransacked. They were released that night. Afterwards police secretly monitored and tracked them. About two weeks later, on May 16, 2020, Ms. Shi, Ms. Chen, Ms. Yu, Ms. Liu and Ms. Gao Xueling were arrested.

Ms. Tan Zuqiong, about 70, from Kaizhou District, was arrested and taken to a detention center in mid-June 2021. She was sentenced to three years in prison in September. She has been taken to the Chongqing Women’s Prison. Details about her situation are not yet available.

Ms. Qiu Tieling and Ms. Wang Jinhui from Xincheng District were arrested. They were scheduled to be tried at 9 a.m. on October 26, 2021.

Several people from the Political and Legal Affairs Committee and the 610 Office went to the home of Mr. Zhu Zhixiong and his wife Ms. Tang Xueying at noon on October 13, 2021. They ransacked the place and confiscated a computer, a copy of Zhuan Falun, an MP3 player, and a printer receipt. The couple was taken to the local police station in the Shizhuyuan area for interrogation. They were not released until 8 p.m.

These people went to Ms. Zeng Qinling’s home on October 14, ransacked the place, and confiscated Falun Gong books, printed materials, a computer, and several cell phones. Ms. Zeng has been held in the Xiameiqiao Brainwashing Center.

Ms. Wang Shuying was arrested at home on October 8, 2021. Details about her current situation are not clear.

Ms. Zhang Shenglian, in her 50s, was stopped on her way to work by officers from the Dujing Town Police Station and staff members from the sub-district administration office on October 15, 2021. She was taken to a teahouse and pressured to sign “three statements” renouncing Falun Gong. Despite the threat that her not signing the statements would adversely impact her children, Ms. Zhang firmly refused to cooperate.

Mr. Xu Yongqing, a senior engineer, went to his hometown of Longquan City, Zhejiang Province, on a business trip on October 20, 2021. At the Longquan Railway Station checkpoint, security guards found a Falun Gong book, a USB flash drive and a computer in his bag. Officers from the Jianchi Police Station arrested him.

Mr. Xu was taken to the Longquan City Detention Center on the afternoon of October 21.

Mr. Yang Zonglin of the Forestry Research Institute was repeatedly harassed by people from Pingliang City and Kongtong District Political and Legal Affairs Committees, 610 Offices, Domestic Security Divisions, and his own community in 2021 for practicing Falun Gong. They pressured Mr. Yang to sign the three statements, which he refused.

As a result, the Political and Legal Affairs Commission instructed the Human Resources and Social Security Bureau to stop Mr. Yang’s pension, which remained effective from June through October 2021. Mr. Yang went to the relevant organizations to complain, but the officials dodged responsibility and refused to resolve the issue.

On October 21, people from the Kongtong District Political and Legal Affairs Committee, the 610 Office, the Domestic Security Division, and the Nanhedao Community Management Office knocked on the door of Mr. Yang’s house. He refused to open the door. When it was past 9 p.m., they called in a professional locksmith and forcibly opened the door.

They pressured Mr. Yang to sign a guarantee not to mail letters regarding Falun Gong, which he refused. Later, they took Mr. Yang to the Nanhedao Community office.

Ms. Wang Huimin and two other practitioners from Shenze County were arrested by people including Chang Liwei while distributing Falun Gong informational calendars on December 21, 2020. Ms. Wang was released on bail for health reasons and has since stayed at home.

On October 12, Ms. Wang received a notice from the Jinzhou City Court, notifying her that she would be tried on October 27.

At noon on September 24, 2021, when Ms. Zhou Weiqun’s son came home for dinner, five or six plainclothes officers who were hiding in front of the house suddenly broke in. They told Ms. Zhou, who was 85 years old, to go to the Changsha Police Department and the Changsha No. 1 Detention Center on the grounds that some students spotted her distributing leaflets with Falun Gong content and reported her to the police. They ransacked her home without presenting any documents and confiscated photos of the founder of Falun Gong, over 40 Falun Gong books, and exercise tapes, among other personal belongings.

They took Ms. Zhou to the Juzizhou Police Station and the Changsha City No. 1 Detention Center. They took measurements of Ms. Zhou’s height and weight. They gathered her fingerprints, toe prints, blood samples, and saliva.

They originally planned to hold Ms. Zhou in the detention center, which refused to accept her as she was 85 years old.

The police placed Ms. Zhou under residential surveillance, which prevented her from leaving Changsha City. She was not allowed to return home until 2 to 3 a.m. that night.

Mr. Sun Yubin, in his 70s, from the Dongchangfu District was arrested by officers from the Xiangjiang Police Station while posting Falun Gong materials on October 13, 2021. The officers ransacked his home at 7 p.m. and confiscated his Falun Gong books and a computer.

Ms. Hu Yaping from the Dongxihu District was arrested by officers from the Wansongyuan Street Police Station, Jianghan District, when she visited a dentist in Wuhan City for dental treatment on October 12, 2021. The officers forcibly ransacked her home and collected her blood samples.

Ms. Hu was placed under criminal detention and taken to the Wuhan City No. 1 Detention Center on the evening of October 14. The detention center refused to admit her for health reasons. She was released on bail and brought home by her family.

Around October 4 and on October 8, 2021, Political and Legal Affairs Committee personnel called Ms. Shi’s husband and threatened him, who in turn coerced Ms. Shi to sign paperwork when she returned home.

Around October 5, six or seven people from the district Political and Legal Affairs Committee, the community management office, and the police station harassed practitioners Ren and Xu. Ren’s daughter worked in a kindergarten, was implicated in June, and was fired by the kindergarten principal.

Around October 11, people from the district Political and Legal Affairs Committee, the community management office, and the police station harassed Ms. Zhou. They asked her son to come back home and then went to her husband’s work unit. They pressured Ms. Zhou to sign paperwork, saying they would not let her family members go to work otherwise.

On October 13, a staff member from the district Political and Legal Affairs Committee, one from the community management office, two from the sub-district administration office, and three others from the police station went to practitioner Zhou’s home for more than half an hour. They told Zhou to go to their office on October 18.

At 2 p.m. on October 12, about 30 people, including Liu Xiaozhi and others from the district Political and Legal Affairs Committee, officers from the Gulou police station, and staff members of the community management office, went to Liaocheng University, where Ms. Zhang Yan’s husband worked, and harassed him. On October 15, they went to the home of Ms. Zhang Yan’s daughter in Tianjin and forced Ms. Zhang to sign paperwork.

On October 14, officers from the Gulou Police Station called Ms. Yang’s husband and went to his work unit and harassed him. Her husband did not cooperate. They told Ms. Yang to go to the Gulou administration office on October 19, on the grounds that the provincial inspection team would come. Personnel from the District Political and Legal Affairs Committee also located practitioner Chen’s son and asked him to take them to where Chen was. Chen’s son grabbed his father’s hand to fingerprint the paperwork.

Ms. Zhang Fengzhi, in her 60s, from Nuanchitang Township, Nanpiao District, was arrested by officers from the Nuanchitang Police Station while talking to people about Falun Gong and distributing calendars at the Nuanchitang farmers market on the morning of October 20, 2021. The officers ransacked her home.

Ms. Rong Tiewen, 74, from Jiangnan Township, was sentenced to four years and six months in prison and was taken to the Jilin Province Women’s Prison.

On the afternoon of October 22, 2021, officer Sun from the Pre-trial Division of the Shanhaiguan Police Department called Ms. Li Yaping who had been released on bail. He notified her that after review, a case had been filed against her and would be turned over to the procuratorate the following day.

Ms. Wu Shuzhen was arrested by officers from the Xiangyang Police Department on June 11, 2021. The officers recently notified her family that her case was turned over to the Longcheng District Procuratorate.

“Podcast (Cultivation): “Japan: My Cultivation Experiences Clarifying the Truth at Immigration Services and the National Diet””