(Minghui.org) The 36th Goteborg Book Fair was held in the Swedish Exhibition and Congress Centre in Gothenburg, Sweden from September 23 - 26, 2021. The annual four-day event is the largest book fair in Northern Europe.

Practitioners were invited to demonstrate the exercises and the peaceful movements attracted many observers. Many people said they could feel the tranquil energy field and were reluctant to leave. 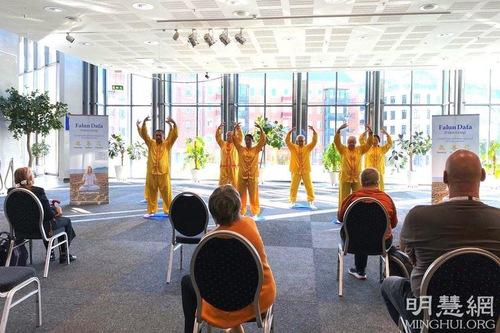 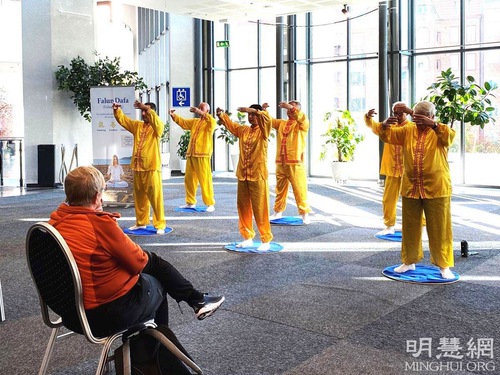 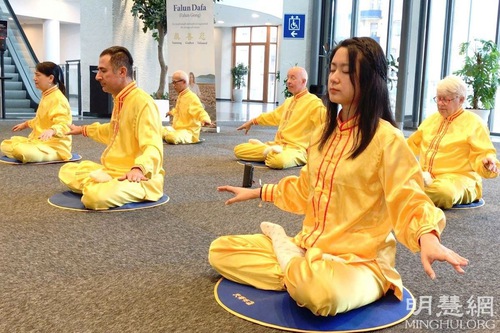 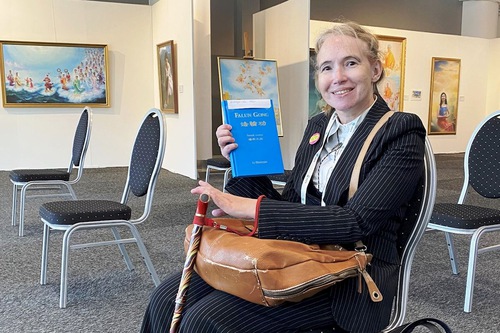 Karin, an author, was drawn to the Falun Dafa exercise demonstration and said the principles can make the world a better place.

Karin is a Swedish writer. She was drawn to Falun Dafa on the first day of the book fair. For the next 3 days, she sat in the first row watching the exercise demonstration.

“I felt very relaxed during the demonstration. My mind became very serene,” she told practitioners. “As a writer, I attend the fair every year. Learning about Falun Dafa is my greatest reward for attending the event this year,” she said.

She said that she resonates with Falun Dafa’s principles – Truthfulness, Compassion, Forbearance and thinks these values will make people and the world better. On the last day of the fair, she sat in the first row flipping through the pages of the Swedish edition of the book Falun Gong while watching the exercise demonstration. She purchased the book at the end of the fair and treated it as a great treasure.

“Your Energy Field Has Healing Effects!”

A man came to see the Falun Dafa exercise demonstration after his friend told him about it. He carefully watched every movement and told a practitioner with a smile on his face, “It is so calm here! It makes me feel composed, too.”

A novel writer who had a booth at the fair found time to watch the exercise demonstration on the last day of the event. She said she felt very relaxed the moment she sat down. After an hour she said, “Your energy field is amazing! My past few days of fatigue are gone and my head doesn’t hurt anymore. Your energy field has healing effects! Thank you for participating in the fair!”

She had to leave to look after her exhibition booth. Before going, she asked for contact information for the practice site in Gothenburg.

Two teachers noticed the exercise demonstration as they walked to a lecture in another venue. They stopped in their tracks and one of them said, “I wondered where everyone was. It turns out they are here.”

They chatted with practitioners for a long time as they observed the exercises. They learned of the things the Chinese Communist Party (CCP) interference including the Chinese ambassador to Sweden’s attempt to damage democracy in Sweden by interfering in Swedish people’s cultural life and threatening Swedish politicians. One teacher said, “They think Swedish people can be brainwashed and oppressed. This is not mainland China. The behavior of these officials show how evil the Communist totalitarian government is.”

The other teacher explained that she traveled to China and is very interested in it’s traditional culture and history. She believes in the ancient Chinese ways of health improvement and told practitioners she looked forward to reading the brochures on Falun Dafa.