(Minghui.org) Under clear blue skies Falun Dafa practitioners held activities on Limmatquai in Zurich, Switzerland. Twelve poster boards were hung on both sides of their tent with information about Falun Dafa and the Chinese Communist Party (CCP)’s 22-year persecution of the practice. A banner that read, “Please sign our petition to stop forced live organ harvesting against Falun Dafa practitioners” attracted many people to sign the petition.

Running parallel to the Limmat River, Limmatquai street was a main thoroughfare in Zurich. Sections were shut down in recent times creating a popular pedestrian zone in the city’s historic section. 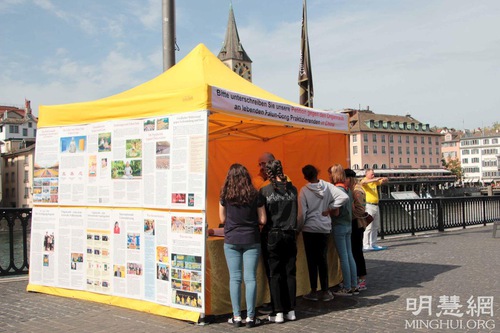 A practitioner tells people about the persecution while others demonstrate the Falun Dafa exercises. 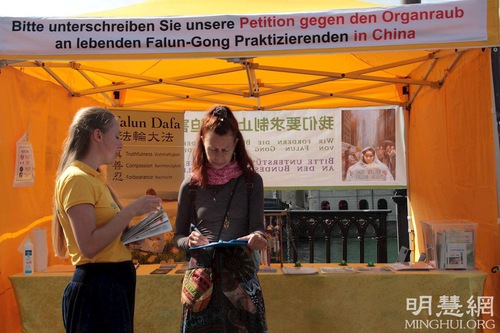 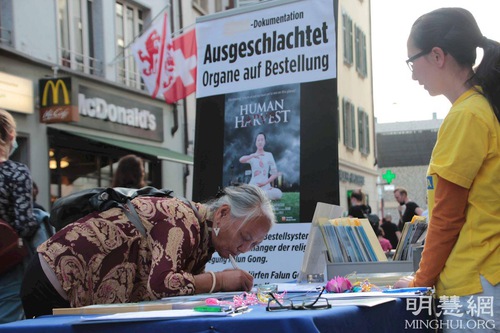 After an elderly woman signed the petition she asked for a flyer for her son.

The same day, practitioners simultaneously held an information booth in Winterthur’s business district, a city about 20 km away from Zurich. A middle-aged couple slowed down and stopped to read the poster boards. They ask for more information about Falun Dafa and were shocked to learn about the forced live organ harvesting which targets Falun Dafa practitioners in China.

Many passersby stopped and watched practitioners as they demonstrated the five sets of Falun Dafa exercises. They happily accepted flyers, and asked about Falun Dafa. After chatting with practitioners, numerous people signed the petition to end the persecution. 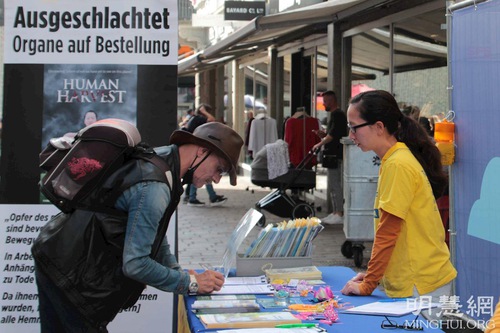 “The Whole World Should Stand Together and Stop the CCP”

“I read information about forced live organ harvesting. This is beyond what I’ve imagined and I can’t believe something like this is happening today. Unbelievable!” said Melanie as she signed the petition. She works in the medical industry and explained that heard about forced live harvesting before and felt, “very upset and horrified to know that this is happening.”

Upon seeing practitioners demonstrating the exercises, she sighed and said, “Look how peaceful these practitioners are. They should have the freedom to practice.”

Melanie said she’s heard that the Chinese communist regime is exerting its influence throughout the world and she feels its methods and ways of treating people are unacceptable. She felt that it is very important to stop CCP. “I think that this is very important. We cannot turn a blind eye. People should pay more attention to this and understand what the CCP is really trying to do. The world whole should stand together and stop the CCP!”

Before leaving she said that she will share this information with her friends. “More people need to know about this persecution.”

Phan Long Chau, a Vietnamese spaceship engineer from France, signed the petition to stop forced live organ harvesting after chatting with a practitioner. He hopes that his signature, “Can help more people learn about the true nature of the CCP.” He said that many people are turning a blind eye to this situation. He was happy to see practitioners raising awareness about Falun Dafa.

Angela, a physiotherapist, also encouraged practitioners to continue their efforts to stop forced live organ harvesting crimes and signed their petition. She was also interested in practicing Falun Dafa and wants to learn more about it.

Supporting Practitioners in Ending the Persecution

Carmen Gersem, a retired businesswoman from Germany, did not understand why the CCP is persecuting Falun Dafa practitioners. “This is unbelievable—how the communist regime is persecuting people because of their faith. This is inhumane.” She believes that the CCP is terrified of people who have spiritual beliefs. “The CCP does not need to afraid of them because people with higher morals values can actually benefit them,” she said.

She hopes that, “China’s current situation will change for the better and people are able to freely express their opinions.”

Andreas Schroeter from Germany said he signed the petition at the Brandenburger Tor (Brandenburg Gate) in Berlin. When he saw practitioners in Zurich he said that practitioners have been peacefully protesting for many years. He said, “The CCP committed a crime. They should let people practice Falun Dafa freely. Forced live organ harvesting is a very horrible act and the perpetrators should be punished and sentenced to jail.”

He stated that the reason the petition is important is so that Europe and countries like Switzerland or Germany will not fall under communist rule. He hopes that by signing the petition, “People will have freedom and live a better life.”

The CCP Should Be Disintegrated 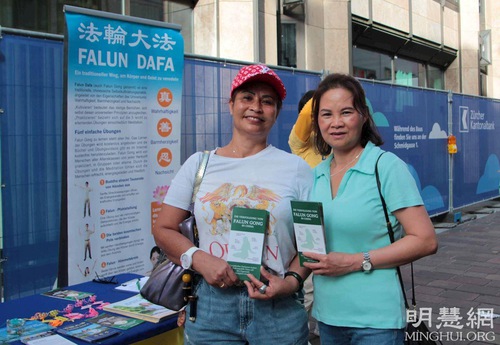 Ms. Dao (left) and her friend took many flyers to share with others.

Ms. Dao Thi Gai was very happy when she saw Falun Dafa practitioners in Winterthur. She said that she found NTD Television online and thus had access to a truthful media. She knew about the 22 years of persecution and the profits the CCP gained from forced live organ harvesting. She shared, “I think this is very horrible and brutal. There should be a law imposed to stop people from getting medical treatment in China.”

Commenting on the CCP’s persecution and constant surveillance of Chinese people, Ms. Dao hopes that, “The CCP will disintegrate immediately. We should have more people realize how evil the CCP is. The whole world should have the right to exercise freedom of speech.” 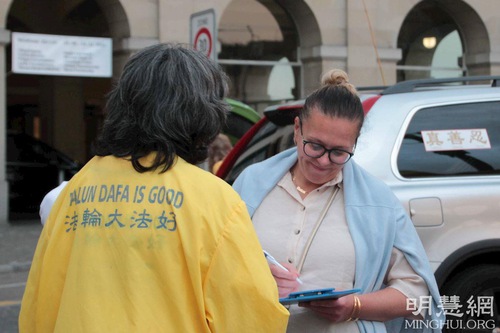 When nightfall approached and practitioners were cleaning up, Ms. Erdogan came to the booth and wanted to know more about Falun Dafa. After signing the petition, she encouraged her daughter and niece to sign as well. She said she heard before how the CCP persecutes people and Falun Dafa practitioners. She said, “We should not let this persecution just slide by in front of us. This persecution should not happen and we should work together to stop it.” She also hopes that by signing the petition, “More people will be aware of the persecution and the persecution will eventually end.”

“Sweden: “Your Peaceful Resistance to the Persecution in China Is Admirable””